The same populist tricks that sparked previous wars are popping up again all over the world today, says historian

Japan? Everybody could imagine Europe, that was the difference. So many Canadian families had their roots there: England, Scotland, France ... but Japan? In those days — in 1941 — to much of Canada, that was another world.

And so, for that matter, was Hong Kong. Almost 2,000 Canadian troops were sent to the then-British colony in a last-minute attempt to deter an expected Japanese invasion. The great majority of the C Force had never left Canada.

Why Hong Kong?
In mid-1941, the then-commander of British troops in Hong Kong and China, Gen. Arthur Grasett, who was a British-born Canadian, left the colony and advised his British superiors that Hong Kong should be reinforced by two more infantry battalions. He believed that this would be a sufficient deterrent to prevent an attack by Japan. He made the same suggestion to the Canadian government, advising that Canadian troops would be suitable (presumably because at that point, while the Royal Canadian Navy was doing more than its fair share of convoy duties in the Atlantic, the Canadian Army was not yet engaged). Despite misgivings — Winston Churchill had famously said, “This is all wrong” — the plan went ahead.

Arriving on such exotic shores would have been an exhilarating experience.

The Fence, a film by Viveka Melki on the documentary Channel, tells the story of these 2,000 troops — including two women — who bravely crossed the seas to help defend Hong Kong.

They were young and inexperienced. They did their best. Some of them survived, some had families, and some of them have become my friends. In more than 30 years as a historian researching the Battle of Hong Kong and its aftermath, I have had the honour of meeting 100 or more of those survivors. Not one has been unaffected by this experience.

Although Japan was winning these early battles, its attack on the United States in December 1941 would prove costly. Admiral Isoroku Yamamoto, the architect of the attack on Pearl Harbor, noted: “I fear all we have done is to awaken a sleeping giant and fill him with a terrible resolve.” He knew America, and he knew that Japan would eventually lose this war, and why.

Under the pressure of war, the U.S. accelerated its military and industrial efforts. They started a war of attrition and cut Japan’s supply lines, pulling the noose tighter and tighter — a strategy that would have eventually destroyed Japan even if the atomic bomb had not shortened the time frame.

Japan then was not the Japan of today. It was an authoritarian country where the emperor was perceived as a god, and its armed forces did whatever he wished. The ordinary Japanese soldier mattered little, Japanese civilians even less, and foreign prisoners of war, not at all.

Meanwhile, the war progressed and worsened for the Japanese. Their army in Burma, hard-pressed by British-Indian forces, suffered unimaginable losses from disease and starvation. One oft-cited account — disputed nowadays — says that as many as a thousand were eaten by crocodiles in a single river crossing. And, in the Pacific, one island garrison after the next was cut off from supplies by the U.S. Marines and the troops there starved.

Sometimes, those isolated Japanese soldiers turned to cannibalism. War crimes trials years later would focus on Allied captives who were eaten, but these starving men also ate their own fallen comrades.

In this context, the fact that Allied PoWs were treated poorly, with very little food and almost no access to medicines, is hardly surprising. In the Battle of Hong Kong, 1,500 died during the short battle, but many more — 2,500 — died as PoWs.

While those prisoners began their internment in Hong Kong, the majority were eventually shipped to Japan itself. There, they worked on docks and in factories and mines, freeing up Japanese men to serve in their country’s armed forces. But as the war turned against Japan, food was available in smaller and smaller rations. The essence of the PoW experience was hunger, boredom, disease and death.

Phil Doddridge, a Canadian soldier who was imprisoned there, describes the conditions at his camp.

In every PoW camp, there were “old China hands.” These were men who had lived in the Far East for many years and could read the local newspapers. They learned that the U.S. navy had been “utterly defeated,” but noted that with each defeat, the American forces were, in fact, moving closer and closer to Japan.

Compassion at the end of the Second World War

Finally, the end came. U.S. President Harry Truman authorized the atomic bombing of Hiroshima, simultaneously ending one war and starting another — colder — one. Within days, Japan surrendered and the PoWs started to explore their new world as victors.

Despite all they had been through and the deaths of so many of their comrades, there are few stories of rancour or revenge on the part of Canadian soldiers. Canadian signalman William Allister — an artist who should have been a million miles from war — describes leaving his PoW camp insistent on rape and revenge, but instead, simply corrected a young Japanese girl’s painting.

When the Americans — in a glorious display of compassion and competence that is perhaps the most undersung achievement of the entire war — started their relief efforts and dropped supplies on the PoW camps, many freed men cheerfully shared this largesse with Japanese civilians. Perhaps they recognized that even after such trauma, human beings were still human beings.

Ralph McLean describes what happened after his release and the special friendship he had with his camp’s Japanese Commandant.

But for ex-PoWs returning home, the impact of their experiences would endure forever. Many suffered to some extent from chronic disease, alcoholism, divorce and relationship issues, depression and suicide, which are known today as symptoms of post-traumatic stress disorder. Lots of them died young, and no one survived the war unharmed. The damage done by Japan’s flirtation with fascism was horrendous.

I’m old enough to know these truths and young enough to worry. And yet I am still hopeful that knowledge and education can prevail.Tony Banham

The lessons we should have learned from Japanese fascism

The concept of one nation saying, “We’re special! All you others are worthless by comparison,” is nothing new. One can see it in many places, even today. Once such an idea gains credence, it can spread like wildfire.

Fascists know the power of slogans and learn to dehumanize their enemies and make them monstrous. Combine these ideas with social media and fake news, and you have a glimpse of our present and future — not only the past.

Today, a number of Japanese school teachers are actively involved in documenting the PoW camp experience, and thanks to them, perhaps the true stories will be told. Meanwhile, the Yasukuni Shrine in Tokyo — one of Japan’s most famous war memorial — still honours war criminals.

It shames me that the same old populist tricks that sparked the Second World War are popping up again all over the world today: Putin in Russia, Trump in the United States, and with the leaders of at least half a dozen other nations. I have sons of military age. I’m old enough to know these truths and young enough to worry. And yet I am still hopeful that knowledge and education can prevail.

Watch The Fence on the documentary Channel. 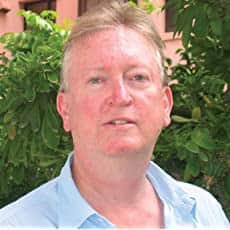 Tony Banham is a Hong Kong-based historian who has researched the territory’s wartime experience for more than three decades. He has published a number of books and papers on the topic with Hong Kong University Press and the University Press of British Columbia, and contributed to many other publications and documentaries. His PhD is from the Australian Defence Force Academy and he is currently honorary editor of the Journal of the Royal Asiatic Society, Hong Kong. His blog can be found at: www.HongKongWarDiary.com