In September 2008, the hamlet of Cambridge Bay, Nunavut, witnessed a historic moment. For the first time, a commercial cargo ship travelled via the notoriously impassable Northwest Passage to deliver the community’s annual sealift of essential items.

“I remember people staring at the ship, like ‘is that real?’” says Waguih Rayes, the recently-retired general manager for Desgagnés Transarctik, a subsidiary of Groupe Desgagnés, the Quebec company that made that first voyage from Montreal. Previously, all the deliveries to the region had been done from the west through the Mackenzie River system by barge and tug boats at much higher costs.

With the changing climate and improved technology, the Northwest Passage had become ice-free enough for Desgagnés to manoeuvre its ships through the majestic channels, where King Eider ducks, muskox and polar bears can be spotted.

However, the route still presents risks. As glaciers melt, massive ice chunks break off and float south, threatening to tear holes in the hulls of ships. As Rayes says, when it comes to shipping in the High Arctic: “Creativity is king, daring is another thing.”

Creativity is king, daring is another thing. Waguih Rayes

Desgagnés is now at the centre of “High Arctic Haulers,” a new CBC television series, about life in the the Far North and the fleet of ships that make these important and daring deliveries.

“The High Arctic is a place like no other on Earth,” says Darren Dembicki, the Lead Director of Photography for the series. “An incredible sense of the unknown exists in beauty as far as the eye can see. The scenery is difficult for the senses to take in: the smell of the ocean air, the feel of the sea spray, the gentle ebb and bob of the ship amidst the swell of the current. We will never forget this place.”

The show will bring attention to a world many do not see or experience — both on land and at sea — and give Canadians a glimpse of a shipping company that’s been serving the country’s northernmost communities for generations. In 2020, the shipping company marks the 60th year of the Degaganés sealift.

Desgagnés’ origins stretch back to before Canada was a dominion, and the company has had to adapt to a lot of change. It all started with Zepherin Desgagnés delivering goods to small communities along the St. Lawrence on his schooner in 1866. As the saying goes, those were the days when ships were made of wood and captains were made of steel.

Over the years, the vessels became faster, larger and stronger. Eventually, in 1959, Desgagnés purchased a 600-tonne ship called Aigle d’Ocean, which was designed to navigate through ice. The following summer, the company began shipping goods further north to isolated communities in the eastern Canadian Arctic.

For centuries, Inuit peoples of northern Canada were self-sufficient, living nomadic or semi-nomadic lives. Colonization and policies including forced assimilation and forced resettlement wore away at many of these traditional land-based skills. And as settled communities grew in the Arctic, the lack of roads and rail lines made the sealift essential as a source for everything from household items such as diapers and food to excavators and other vehicles.

Related Links
Faced with a lack of port infrastructure and a schedule that's set by tides, unloading cargo ships in remote Arctic communities is a challenging job.
The sealift is our lifeline. It is vital, it is our roads, it is our survival, it is our necessity. Madeline Redfern Mayor of Iqualuit up until Oct 2019

“Without the sealift, I don’t know if I, myself, would even be staying here,” says Meeka Kiguktak, who has served as the mayor of Grise Fiord on Ellesmere Island since 2012.

“We work with the Arctic communities. They live there, it’s their home,” says Daniel Desgagnés, 56, who is the managing director at the company his great-grandfather started. “I think the first contract that the company had in the Arctic was for food service up in Nunavik.”

Today’s sealifts are more frequent and complex. “When I was on the ships [more than 30 years ago], it was an event during the summertime. It was incredible because the store was almost empty. Then we arrive with all the goods that they need for a year.”

“As the populations grew, the services grew. It was a natural increase of cargo.”

Arctic communities expanded with new facilities and infrastructure programs, and the sealifts have adapted to fill those needs.

Climate change has also altered the scale of the Degagnés service. Since 1979, Arctic sea ice has been declining at a rate of 12.85 per cent per decade, freeing up waterways that were previously unpassable “We go earlier and we stay longer than what was [possible] 30 years ago,” says Daniel. “It’s true that we also have larger ships, more capable ships, but I [didn’t] think we would have been able to go in the Northwest Passage.”

Shipping has been the backdrop and foundation of Daniel’s entire life. Growing up, he remembers his father, Claude, was often on the water for months at a time as a ship captain. “So during the summer when we didn’t have school, [my mom, brothers and I] would join the vessel and make a trip up to Montreal or down to Seven Islands and spend a week with my father,” remembers Daniel.

While he was in university, Daniel worked on the ships in the Arctic in the summers. This is when he realized he couldn’t be a captain like his dad because he gets seasick. But that didn’t stop him from starting his career with Desgagnés the day after he graduated in 1988. “I grew up in this universe,” explains Daniel.

The year before, the business had been purchased by Louis-Marie Beaulieu, who is still the company’s CEO. However, Beaulieu didn’t dare change the name. “Since 1866, Desgagnés was Maritime,” he says. “[That family] was recognized as seamen, not me.”

After Beaulieu took the helm, many members of the Desgagnés family, like Daniel and his three brothers, continued to work for the business, offering their expertise as captains, engineers, crane operators and managers. Currently, Daniel heads up Nunavut Sealink and Supply Inc. (NSSI), which is a partnership between Arctic co-ops, several Inuit associations and Desgagnés.

Since NSSI was incorporated in 2000, the Arctic sealifts have expanded from just over 100,000 cubic metres of cargo to 600,000. “I always think about my grandfather and my great-grandfather,” says Daniel of the company’s growth. “They never thought about where we would be now. This is what I am most proud of. We continue something that was started a long time ago, and we never stop.”

They never thought about where we would be now. This is what I am most proud of. We continue something that was started a long time ago, and we never stop. Daniel Desgagnés

Last year, Desgagnés had nine ships making deliveries to more than 40 Arctic communities and several mining sites. The shipping window is short, from July to October. While ship captains do everything possible to stay on schedule, they are at the mercy of Mother Nature. “You have to be careful,” says Daniel. “It’s still the Arctic. It’s still windy. It’s still high seas. It’s still tricky to operate there.”

Deliveries can be delayed by storms and ice flows. If a waterway becomes too clogged with chunks of glacial ice, the captain will radio the Coast Guard for an ice breaker to clear a path and lead them to open waters.

Another challenge is that port communities in the High Arctic don’t have shipping infrastructure, like docks, for loading and unloading. So Desgagnés ships have to be completely self-sustaining, with cranes, cables, forklifts, barges and tugs to manoeuvre hundreds of cubic metres of cargo onto the beach.

“At the end of the season, when we have delivered everything without any significant incidents or injuries to our people, it’s a kind of satisfaction,” says Daniel.

Daniel attributes the company’s survival and success on something his dad and uncles taught him. “When something happens, because something always happens, take five minutes and then think about the solution,” explains Daniel. “Don’t dwell on the negative.”

The company can’t tell a community “no, we won’t deliver” or “that isn’t possible.” The staff members will find a way no matter what the weather or circumstance because shipping in the Arctic is an essential service. Sure, it might be faster to airlift items, but that can cost customers eight times as much money and some things simply don’t fit on a plane.

“It’s very important for us to listen to what the people of the Arctic need and try to find ways to make it happen,” says Waguih Rayes of Degagnés Transarctik. “This is part of what we do. It’s not simply putting cargo on ships and delivering them to beaches, which is challenging, but it goes way beyond that.” The company motto is to be proud of who you are and the work that you do.

With these partnerships in mind, the company is also finding more environmentally friendly ways to operate. In the last two years, the company has christened several new ships with world-class eco-friendly innovations. When on battery, these ships can literally run with no emissions.

Desgagnés' motto: Be proud of who you are and the work that you do.

“When I started, the company was a teenager. Now, she’s an adult who’s learned a lot but still has to learn and continue to grow and maybe face some difficult steps to do that. When you grow, it’s step-by-step.”

“I’d say that our goal is to be there for many, many, many years and continue to grow in the Arctic and elsewhere,” says Daniel. “To my surprise, over the last 10 years, our vessels go all around the globe over the winter. So, I can see my name in Japan, in Australia, in China — all around the world right now.” 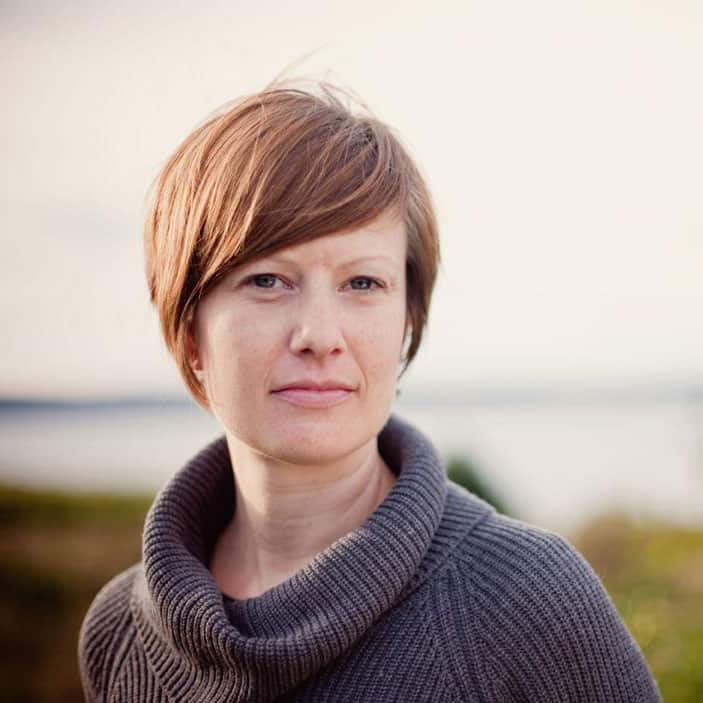 Kristy Woudstra Kristy Woudstra has been covering human rights issues around the world for 20 years, mostly for magazine, broadcast and digital. She is currently the features editor at Broadview magazine and a freelance writer based in Hamilton. Her first book, Highrise, was published in 2019.