“Last year was a lot of napping, going to movies, sitting on patios, sipping cocktails, going to concerts. Things that I completely took for granted”, says Smith. That’s the version of her life that she says is constantly being parrotted on Facebook by those annoying reminder alerts. “It made me realize how active we were…  [laughs]”.

Now, Smith, along with her husband Eric Steingröver, spend every piece of their free time taking care of Tula, who they have since dubbed “Boss Lady” due to her feisty personality and love of pre-language debate. This lifestyle one-eighty meant having to change the way they lived. Friends told them the first six months would be a breeze. They could still go to restaurants and do fun stuff because babies that age sleep all the time. “We did not have that. Tula is a force to be reckoned with [laughs]”, says Smith.

Aside from lifestyle changes, Tula’s arrival has also meant having to change professional aspirations. When Smith wrapped on season one of THIS LIFE, she was already pregnant but eager to get back to work. She actually auditioned for a role on a feature film. It was perfect. The job would have only lasted a few days and the character she was auditioning for happened to be a pregnant woman too. In the end, out of all who auditioned, it came down to Smith and one other actress. When I asked who got the job, Smith lamented that “they [the industry at large] just don’t want to hire pregnant women [...] for insurance reasons or whatever.”

The audition process aside, Smith spotlit another surprising fact. Under ACTRA, maternity leave falls under disability. As enshrined, new mothers are only given four weeks maternity leave when their child is born and they will only be compensated based on the scale of their work from the previous nine months. If Smith’s personal experience is any indication, many are stuck taking the base amount due to their inability to get gigs.

Without her husband’s ability to take time off from his work, Smith admits that it would’ve been nearly impossible to balance work with life these days. As things stand, with Tula now in the picture, time is hard to come by. “The luxury of spending hours in the park learning lines at a lovely pace was pretty great”, was exhibit A for Smith. Nowadays, Smith needs to multi-task breastfeeding with line reading and hair and makeup with play. But you will never see her complaining. 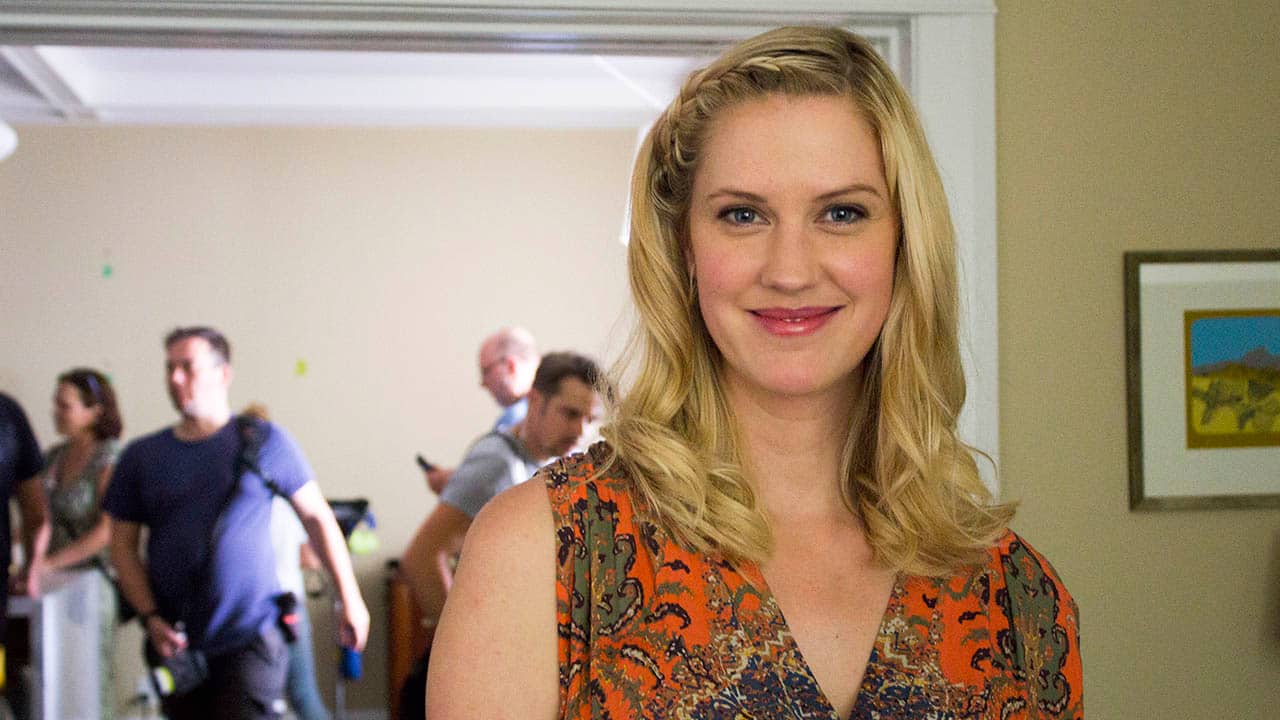 On set with Lauren in Montreal, filming season 2.

Instead, all of her oddball experiences get posted on her instagram feed for the world to see. Witnessing other powerful working mothers post about their own abilities to kick ass inspired Smith to document her own reality. For Smith, sure, it’s a feminist act but first and foremost, her photos are meant to tell other mothers or women thinking about becoming mothers that work-life balance is possible. As an added bonus, it lets the rest of us melt at the sight of Tula’s chubby cheeks.

Smith’s brimming confidence to put herself out there took work, though. She admitted to being a total “ball of nerves” before stepping on the scene for season two because of all the uncertainty. There was also that small matter of playing a character who arguably opposes most of Smith’s current life choices. Smith credits the support she’s received on the project. “From the very beginning, it was “What can we do to help you out”, says Smith and that support never wavered.

The production surprised her with a pack n’ play set in her trailer, which included toys, a play pen and a changing table to ensure that Smith would not have to carry the essentials to and from home. On top of that, Smith says she was never pressured into shedding weight to pre-pregnancy levels or hurrying up breastfeeding time on set when the clock is so rapidly ticking. There’s also nothing that cuts through the tension of a difficult day of shooting like the almost omnipresent laughter of Tula. Let’s just say she’s kind of been our human therapy dog.

Ultimately, THIS LIFE’s new mom believes that in order for big changes to happen, the union and the industry at large need to step up and better emulate her personal, day-to-day experiences on set this summer. Like Smith, I don’t know how mothers do it but I do know we are blessed with an incredible talent and one heck of a new boss lady.