The most organized, cooperative village that doesn't exist

Bear River was split up in the 1830s, it’s just that the people choose not to see it that way

Bear River was split up in the 1830s, it’s just that the people choose not to see it that way

People used to refer to Bear River, Nova Scotia as the Wild Wild East, and for good reason. The town hasn't technically existed for almost 200 years, but don't bother telling the residents that. They're too busy running the place.

Bear River was established in the 1700s, during the first wave of European settlement, but in the 1830s, Bear River — the actual river — was used to divide the counties of Digby and Annapolis. Which was convenient for the divvying up of land but left the community who straddled both sides of the river a bit… split up over it. And while nobody made a fuss about it, they also weren't interested in giving up their community.

As a result of that division, Bear River doesn't have official status with either county, meaning they lack dedicated and funded local government, so they depend on volunteer societies. Which, as Jonny puts it in the episode, is both good and bad. "Good, you get to do things your way. But also you have to get your own things done."

Back in the mid-'90s local business owner Jon Welch returned to his home province of Nova Scotia after over a decade of tree planting on the West Coast. When he started looking for some land to settle down on, he and his gigantic beard were pointed in the direction of Bear River, "where the hippies live."

He immediately loved the communal spirit of the place. His neighbours were running the water society, the economic development society, the board of trade, the fire hall, even the health clinic.

So when he found himself taking a pickaxe to the immense ice build-up on the local bridge one winter in an attempt to create a safe crossing for pedestrians, he was joined by 18 other people before the day was out. 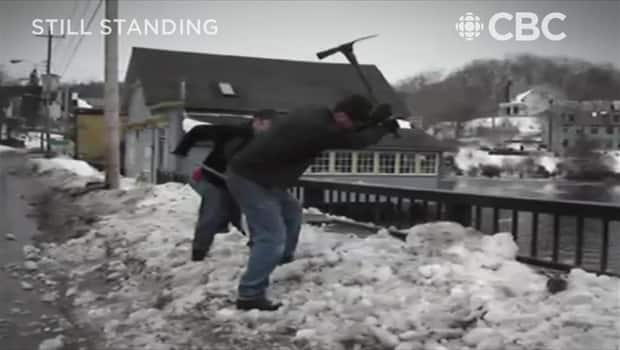 4 months agoVideo
1:14
The Nova Scotian community of Bear River operates a little differently than most — they operate just about everything themselves, including sidewalk snow removal. 1:14

Watch the full episode to learn more about the most organized, cooperative village that doesn't exist.