Nothing says good health like a good bowel movement (BM)! So Dr. Melissa Lem has the scoop on poop and what yours is saying about your health. 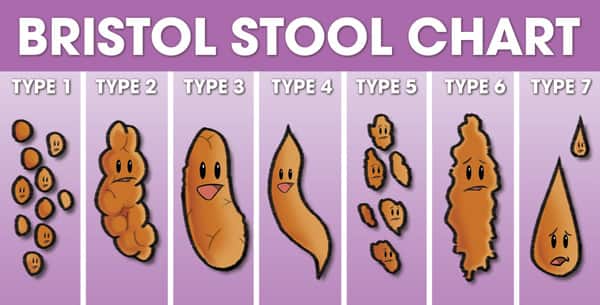 "Normal" is what's normal for you. Some people go after every meal, others, once every few days. Familiarize yourself with your bowel habits so that if there's a consistent change, you'll recognize it and bring it up with your doctor.

An average bowel movement should be between four and eight inches long and have the consistency of peanut butter. The Bristol stool chart (see above) is a handy medical aid for classifying stool. A shape similar to any of Types 1-3 may indicate constipation, while something more akin to Types 6 or 7 means diarrhea.

It's totally normal for stool to smell bad, thanks to the digestive bacteria in your colon. That said, a particularly pungent odour can be a sign of trouble (e.g. infection, inflammatory bowel disease or celiac disease).

It's not uncommon for colour to change from one BM to the next, but persistent changes can be a sign of trouble. Here's how to interpret your poop's changing palette:

Brown
Any shade of brown is considered normal. It's a result of the bile secreted by the liver.

Green
Green stool is not uncommon and is usually caused by eating green foods or taking certain medications. Loose, green bowel movements, however, can indicate that food is moving through the intestines too quickly.

Yellow
Yellowish stool can indicate problems with fat digestion. Such stool is also usually greasy and has a particularly foul odour. This can be the result of an issue with your liver or pancreas, which produce substances that break down fat.

Red
Red stool can be a sign of lower intestinal bleeding due to tumours, inflammatory bowel disease or even hemorrhoids. Non-threatening things like beets or food dye can also cause your stool to turn red.

Black
Black stool can indicate bleeding—anywhere from your esophagus to the middle of your small intestine—and is caused by the breakdown of iron in your blood. Stool that is black because of internal bleeding usually has a tar-like consistency and smells particularly bad.

White
White stool is generally not normal, and is usually caused by a lack of bile in the stool either because the liver is having trouble producing it, or bile is somehow being prevented from leaving the liver or gallbladder.

The Dirty Secrets of Your Favourite Foods