Bestselling author Liz Primeau's love affair with garlic first began as a teen when her then boyfriend took her to an Italian restaurant. Since then, she's been fascinated with the powerful bulb—even penning a book, In Pursuit of Garlic (Greystone Books, 2012), on the subject. Here are just some of the reasons why she loves garlic and thinks you should, too! 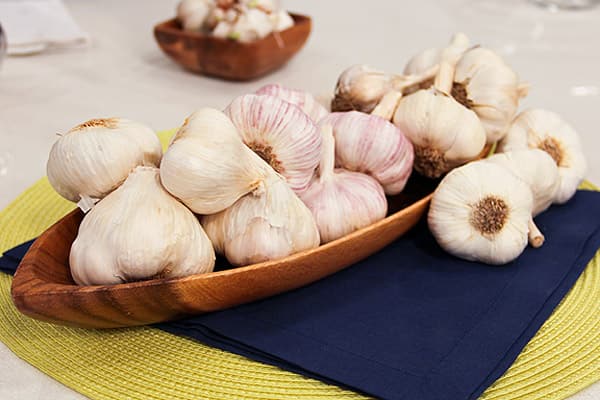 During WW I, crushed garlic was actually used to treat wounds, and many people still use it for coughs, bronchitis and pneumonia. (Try Primeau's cold-coming-on soup!) And it's not all just some old wives' tale. In fact, scientists at numerous universities are currently studying garlic as a treatment for all these ailments as well as high blood pressure and cholesterol.

Some ancient peoples believed garlic and coriander seed to be the best and most effective aphrodisiacs! Who are we to argue? Grind the seeds with cloves, let the mixture soak in red wine and drink up!

Garlic was once used as currency.

Valued for its medicinal and energy-boosting properties, 15 pounds of garlic would buy you a permanent, live-in slave in Egypt around 2,000 BC. The Egyptians also belived it kept evil spirits at bay so pharaohs were often buried with garlic to protect them on their journey into the afterlife.

Not all garlic is created equal.

The secret to getting great garlic is to buy local whenever you can. Hit up garlic festivals in the summer and fall and stock up. You can store garlic bulbs long-term in your cold cellar but never in the fridge (it will sprout). Alternatively, you can freeze peeled cloves and chopped garlic in ice cubes for future use in soups and stews.

Off-season, organic Mexican, Argentinian or Californian garlic is your best bet as they boast more flavour and nutritional benefits than the Chinese-grown variety. Though bulbs imported from China boast a longer shelf life, they're drier as a result.

In fact in some cases, garlic has even worked better than the antifungal agent nystatin, which is commonly used to treat yeast infections and many bodily moulds. For toenail fungus, try garlic grower and author Chester Aaron's remedy: Press one to two cloves of raw garlic into a small bowl filled with a shot of vodka. Dip a piece of cotton into the mixture, squeeze off extra liquid and place over affected nail. Remove the finger from a rubber glove and use along with a rubber band to hold cotton in place. Wear while you sleep and remove in the morning. Repeat nightly for up to 10 days.