While he's witnessed many a victory on the ice as host of Hockey Night In Canada, Ron MacLean came to us to face off in his first competitive DIY challenge. And after watching him wield a glue gun for the very first time, we got a glimpse of the big prize that's the envy of many an NHL hockey player.

MacLean's been with Hockey Night in Canada for 27 years, but he told us his love of hockey predates even that.

"Dad was in the military, we lived in the Yukon territory in the 60s. My mom and dad were [into] arts, political science — they had nothing to do with sport in their lives. But a neighbour had a backyard rink, and the rest is history."

As NHL playoffs approach, MacLean also shared some facts about the Stanley Cup itself. Dating back to 1893, those in a position to celebrate with it may be interested to know the top bowl holds 14 beers. Each player and coach on the winning team gets to keep it for one day. And while others can touch the Stanley Cup, if you want to hold it over your head you have to earn it.

While MacLean still remembers the intensity of the first Stanley Cup playoff game he experienced in 1986, he says there's still nothing like watching the competition to hoist the cup in the air. As Hockey Night In Canada celebrates its 60th anniversary, his passion for the game is still clearly thriving.

"Growing up a hockey fan from the time we lived in the Yukon, I always felt like the [Maple Leaf] Gardens or the [Montreal] Forum were another room in the house," he says. "Saturday night in Canada has turned into just such a great tradition for 60 years." 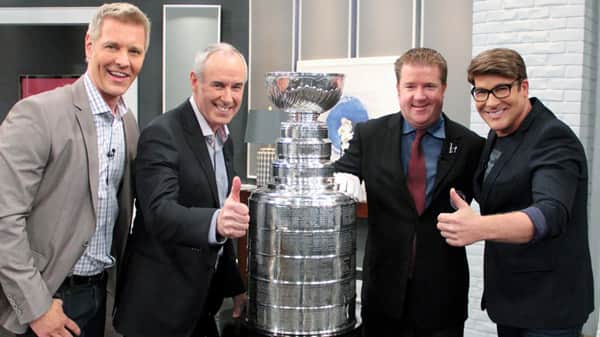