Meet Kayla Feenstra, a young, six-foot-two woman who constructed her 130-square-foot home in two months and cost her just $15,000 to make. You would think a small space for a tall woman and her two pets would be confining, but Kayla loves everything about living in her new space. 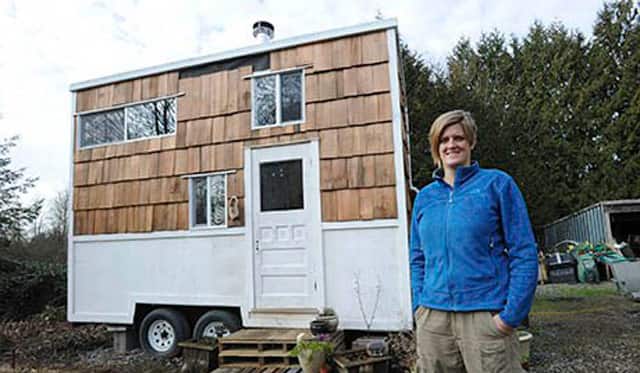 Growing up, did you ever dream about living in a tiny home?

Absolutely — when I was nine, my favourite book from the local library was about a little mouse that moves out into a tiny house and lives a simple life. I probably wore that book to shreds. I didn’t come up with the idea of putting the tiny house on wheels until 2013, but I always wanted to live simply and quietly.

Your tiny home, Jack-in-a-Box, was built after your offer for a home in Abbotsford, B.C. fell through. What were your thoughts at that moment?

I was extremely disappointed when the offer fell through, but that shortly moved into thinking, “What’s next?” as well as the quickly following reassessments of what I wanted (travel and simplicity), how much debt I would be comfortable with, how much risk I wanted, how much I wanted to deal with roommates (zero), and what my priorities actually were.

What was your motivation to build a home from scratch?

I thought back to what I wanted when I was eight and nine, and remembered everything I’ve experienced in life, knowing that every step only prepares us for the next. I grew up building houses with my family, and the first floor plan I drew that my mom saved was earmarked when I was five, so I grew up knowing I’d build my own house — that was never a question.

The jump between buying a normal house and building one on wheels was fairly simple — I determined I didn’t want a half-a-million-dollar mortgage by myself. I didn’t want to be a slave to 100-hour work weeks, and after assessing what I really wanted, I decided to build a 100-square-foot house on a cement pad on someone’s property. Then I realized that if I did that, I’d have to leave the home at the property when I left, and I remember standing in my back yard brainstorming and thinking, “Movable. Movable house. How do I move this thing? WHEELS! Put it on wheels!” This moved to building on a flat deck frame, and when I studied road restrictions and Transport Canada guidelines, I realized I could have a home much larger than just 100 sq. ft.

When I told a friend of mine about my idea, he said, “Oh, a tiny home!” I said, “Sure...” to which his response was showing me dozens of YouTube videos of tiny homes across the world — my mind was blown away that others had already thought of this and were already living this way. 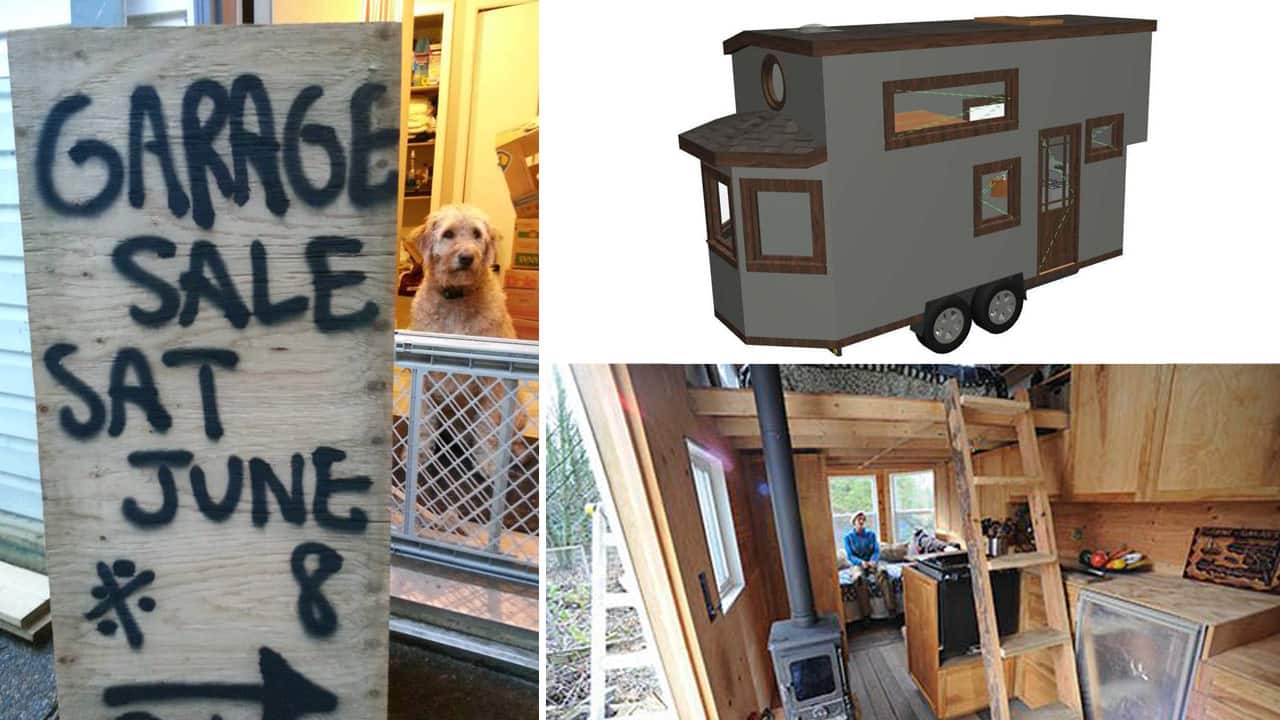 Were there times during the building process where you thought you'd rather give up?

Giving up? Yes, there were many times where I thought, “Just burn the damn thing down already and go live like a normal human being.” There are still days I think this, but I see the mortgage pain many of my clients go through, and that they are chained to their homes — I have never experienced a moment of, "Why the heck did I do this? I can’t afford this!" If I walk away now, I will have lost nothing monetarily, but have gained an incredibly enriching experience, and a new, incredibly colourful paradigm.

Besides terrifying? Liberating! I had a massive garage sale, and remember not being able to put a price on some things — that told me that I valued those things, and I still have those things. I was shocked to see my attachment to some things — I never identified as someone who had stuff. I gave away things, put free signs on stuff in the driveway and slowly got OK with letting go. My neighbours thought I was absolutely insane. In June 2014, I put the rest of my belongings (except camping gear) into boxes, put them into a barn, moved out of my suite, and let the boxes sit till spring.

I camped outside in a hammock until October with my few possessions and my dog and cat, and within three months, I couldn’t remember what was in 20 of those remaining boxes. This realization was intensely freeing — the stuff I’d had attachments to didn’t matter anymore. All the stuff I’d let go didn’t matter. Then I remembered all the times in my life I’ve started over in various towns and countries, and I pretty much laughed at myself for psyching myself into thinking it would be difficult. 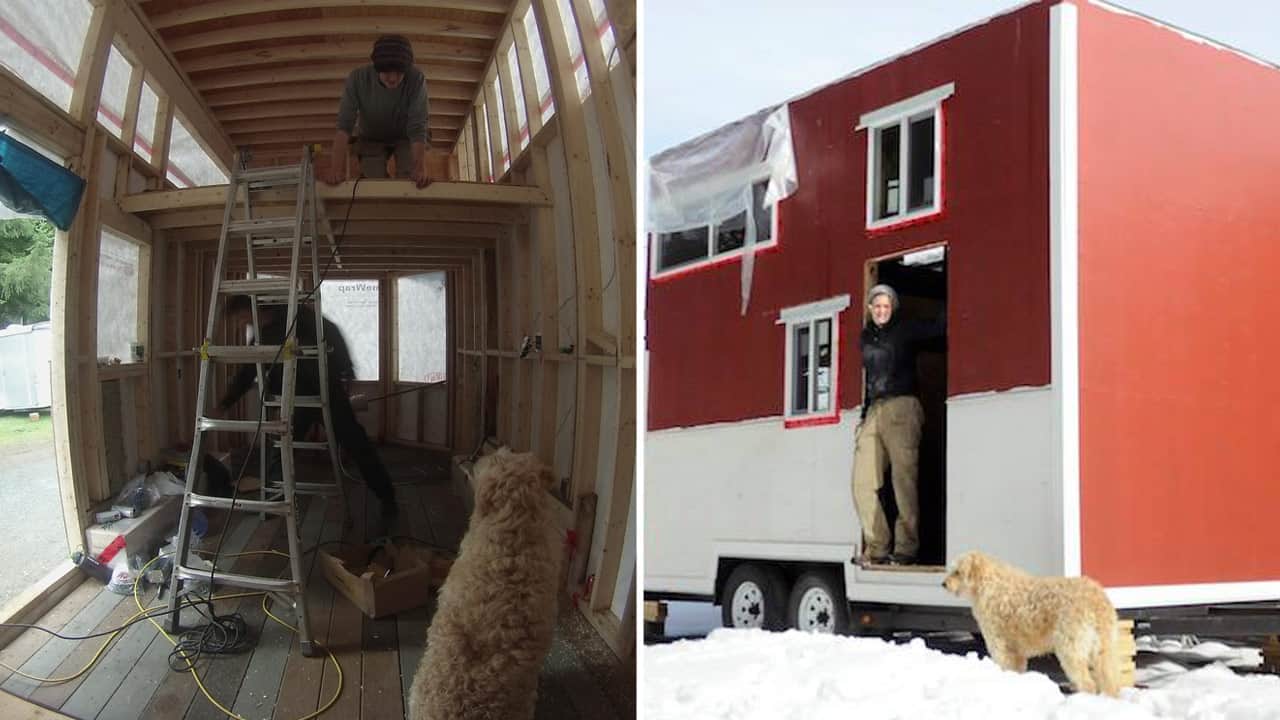 How did your dog and cat adjust to tiny home living?

My dog loves it. He’s turned into the best hunter and absolutely loves living outside even more! My cat totally thought the whole thing was insane, but in the first week of hammocking, she was jumping into my hammock every night, leaving at some ungodly hour, and then returned back in the morning to wake me up. She turned into an amazing hunter as well.

In October, when the rains came, I bought a camper for the winter. I realized that the rest of what I considered important could all burn — all I needed was shelter, food, friends, and the warmth and company of my dog and cat.

What are the best aspects of living in a tiny home?

I wish I would’ve done this when I was 19. Society tells us we have to do things a certain way, and doing this tiny home build has completely shifted so many societal norms for me. I love my space, and in loving my space, invite more people into it — I think I had three or four people over in my dark basement suite in the two years I was there.

It’s portable, which is a massive bonus. I’m off grid completely, using solar power, rain water harvesting, grey water systems, and a compost toilet — the shift in consciousness in living this way has been incredibly enlightening, and has forced me to slow down a little. I designed my home to allow for maximum light as well as maximum air flow — the bay window sits to the south, the solar panels line the slightly sloping roof for maximum exposure, but the loft is out of any direct sunlight, with opening windows on the east and west sides for cross flow.

I use every part of my tiny home — I remember the day I walked into my living room in my basement suite through massive spider webs and realized I hadn’t been in the living room in over two months. Why did I have space I didn’t need? One day in the hammock, I woke up thinking, “I have everything I need…and I need everything I have!” I come home every day with gratitude, and have that rare feeling of being home — a priceless and indescribable feeling.

Any downside to living in a tiny home?

There are so many things I don’t miss, but I do miss my piano — it lives in my insulated shop now, so I still have it, but for some reason, my humanity felt like it should be in my house. I also miss being a foster caregiver — something I’ve done off and on for over ten years. I doubt the Ministry of Children and Families would ever look at my tiny home and certify it! Sometimes I miss “normal”, but then I wake to every sunrise, and fall asleep looking at the moon every night, and nothing beats that! 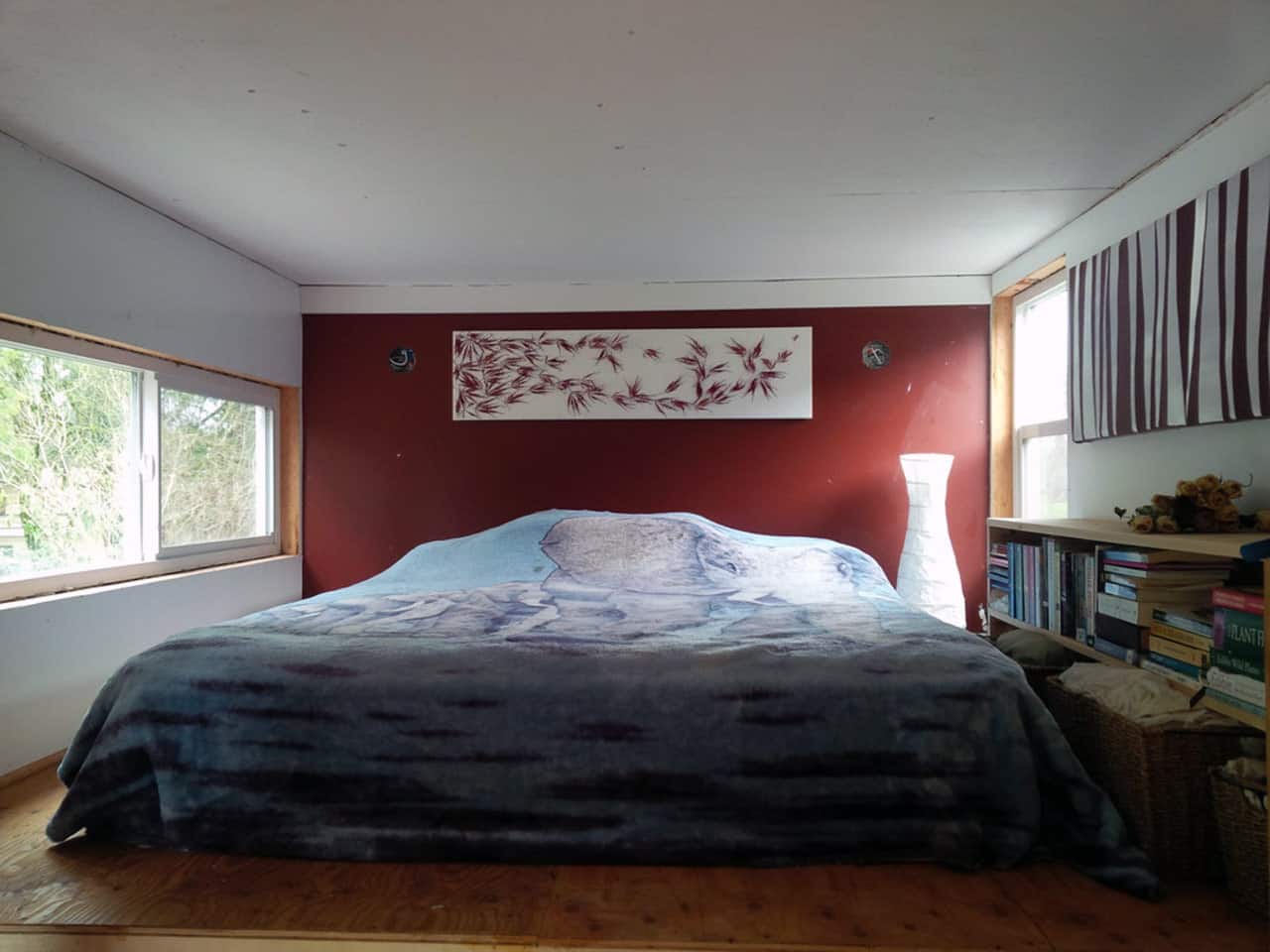 How do you feel about the growing tiny home movement?

I wouldn’t necessarily call this a movement; I would call it a practical return to sustainability. When did we get the idea that bigger is better? When did we stop growing our own food and trade it for bigger mortgages, more time cleaning, more renters, more headaches, and more repairs?

Who would you recommend tiny home living to?

Tiny home living isn’t for everyone, but that’s where micro homes can perhaps come in? The majority of people who’ve written me saying, “I want a tiny home!” are university students, retired, single, single parents, young couples, travelers, veterans, or people dealing with disability or on a lower income — but they still have the dream of wanting their own home, of their own design, and often their own making.

What's next for Jack?

Jill! Jack is amazing, and building her changed my life in so many ways! Jack is now looking for her Jill — my tiny home was never the end goal, but a vessel to a new reality. I still want to build a larger house, albeit much smaller than I ever dreamt, and that will happen soon. A big part of me would like a partner in this process — someone inspired to live differently, and to make a difference. 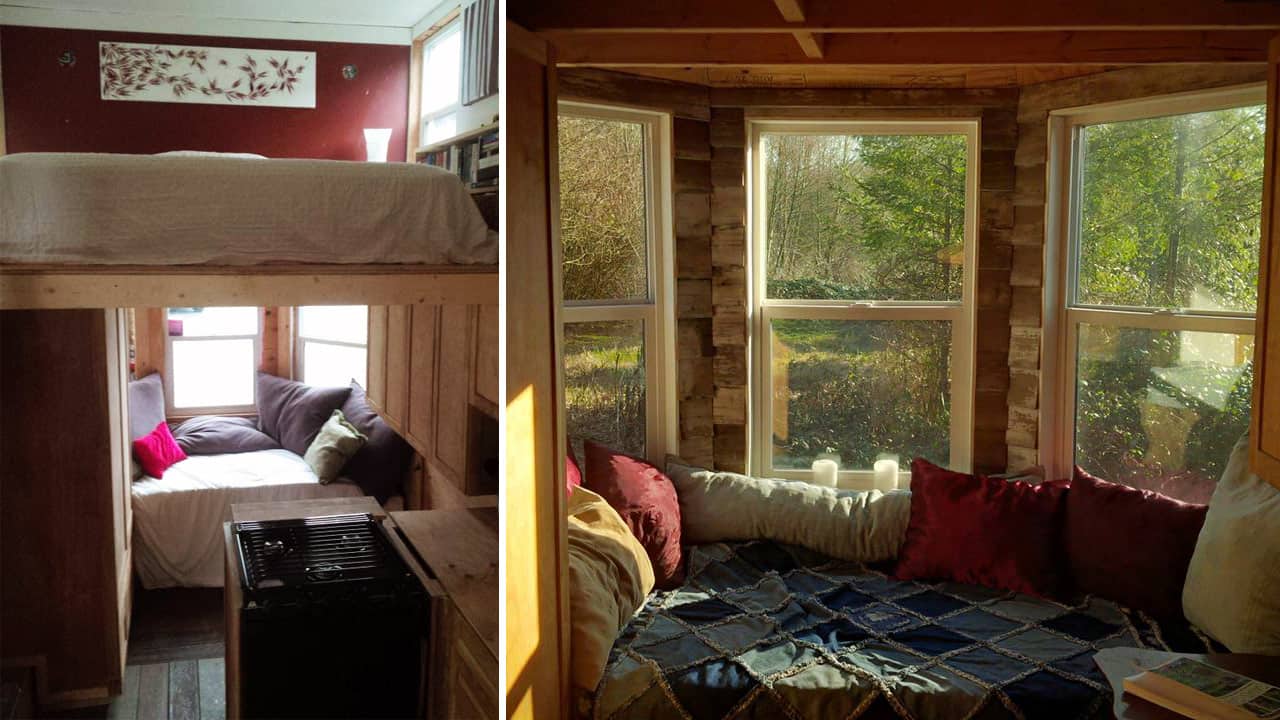 Kayla has received much interest from people — thousands of emails from all over the world, but especially in Canada, asking about the process, the costs, legality, and practicality of owning a tiny home. Her business, Tiny Homes Canada, will roll out pricing for building tiny homes in the next couple weeks — people can sign up for their newsletters and a free e-book on Tiny Home design planning at www.tinyhomescanada.com.