Our favourite flexitarian, Joshna Maharaj gives us the lowdown on the lentil. (And if these 10 tasty tidbits don't convince you to try some tonight, her lentils with mushrooms and cherries surely will!) 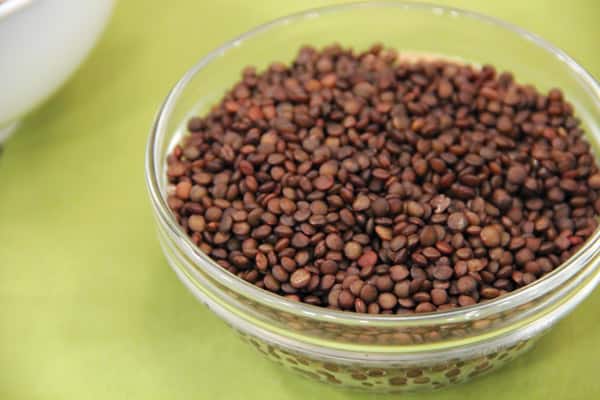 1. Lentils' numerous health benefits have earned them the nickname, the "nutritional fountain of youth."

2. Lentils are part of the legume family but are better for you and easier to cook than their bean brethren, which require pre-soaking.

3. One cup of lentils has twice as much protein (18 grams) as the same amount of quinoa and twice the fiber (15 g)!

4. Lentils also boast high levels of folate and iron. In fact, lentils are a better source of iron than red meat because they're low in fat and calories.

6. Lentils should be stored in cool, dark place. If exposed to air, they will dry out and take longer to cook—which is why it's important to never mix old with new! Older lentils will be drier and require a different cooking time.

7. Store cooked lentils in their cooking water in the fridge to prevent them from drying out. Lentils can also be cooked and frozen for up to six months.

8. Before cooking lentils, lay them out on a white towel and pick out stones, dirt, debris and damaged lentils.

9. Rinse lentils under cold water before cooking. To cook, cover with water, bring to a boil, reduce heat and simmer until tender (about 25 minutes). Never salt cooking water; it will make lentils tough.