He's big on hockey and bold with fashion. Ask any Canadian hockey fan: there's only one Don Cherry.

Born in Kingston, Ont., Don Cherry spent his early days on the ice as a longtime player in professional minor hockey. In 1955, he played his one and only NHL game for the Boston Bruins, a team Cherry later went on to coach and lead to win four straight division titles.

Today, Cherry is best known for his flamboyant fashion statements and tell-it-like-it-is commentary as the face of CBC Television's Coach's Corner, an intermission segment Cherry co-hosts with sportscaster Ron Maclean as part of the popular CBC sports program Hockey Night In Canada.

We caught up with the tough-talkin' 78-year-old backstage to discuss the most important lesson he's learned over the course of his lifelong sports career and find out the story behind those oh-so-fashionable blazers that have become synonymous with his name. 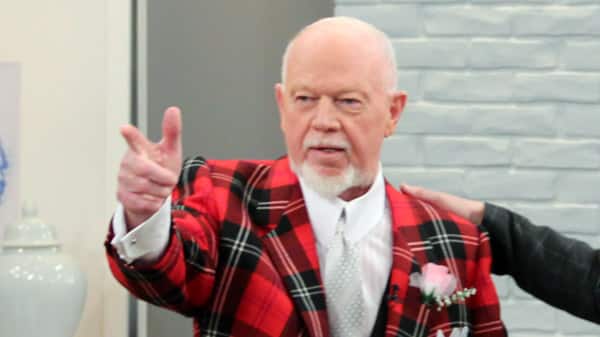 Q: Over the course of your career, what's the most important lesson you've learned?

DON CHERRY (DC): Hard work. And hunger. Keeping your [hockey] team hungry is the main thing. If your team isn't hungry, if you don't have the talent, and you don't work hard, you're not going anywhere.

Q: What's your favourite pastime (next to hockey)?

Q: What's the story behind your famous flamboyant blazers?

When I was in Boston I got a new suit and everybody in the papers were saying: "Oh, what a beautiful suit." So I thought, "Well, if they like this suit, let's get a plaid." So I got plaid. It then got to a point where people were tuning in to see what I was wearing, not what I was coaching. Then I got into television. I remember they all wore blue jackets. I said, "I don't have to wear one of those jackets." So I got into the plaid and everything else. Now I go out and get drapery and everything. I think the kids get a big kick out of it too.

DC: I don't recommend anyone to wear what I'm wearing, especially the shirts. They're very uncomfortable. As my Dad told me one time: it's better to look good then feel good. You have to feel uncomfortable. I go back to 1936 - the way [people] dressed back then. I thought they were the sharpest dressers of all.

Q: Do you have a favourite recipe?

DC: I have no idea how to cook. To tell you the truth, if I had to eat I'd probably just be eating out of cans. My wife cooks great for me. I'm a meat and potatoes guy. Sometimes salad.

Q: What is your life motto?

DC: Give it all you got all the time and don't back down. That was my Dad's motto and that's what I've tried to speak to.