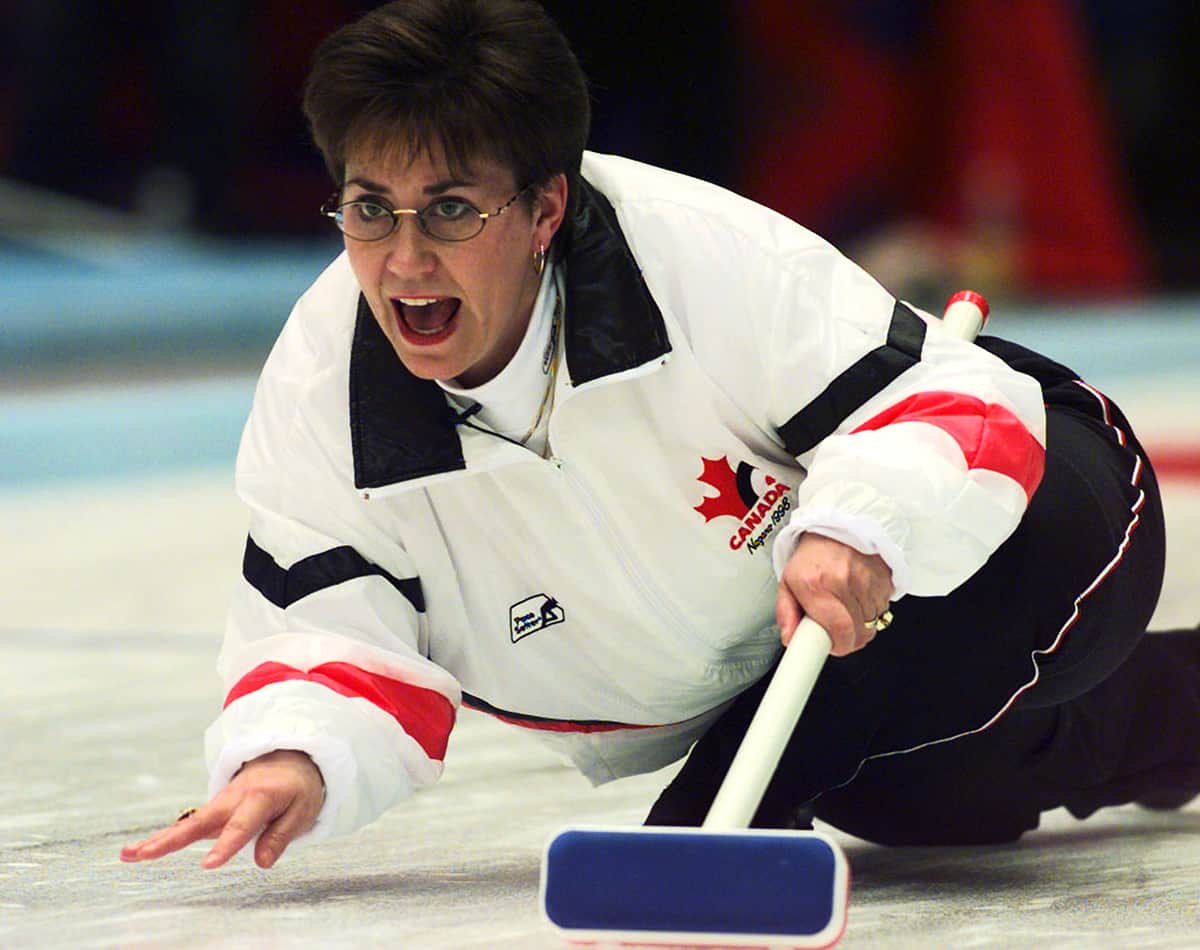 More than 20 years after Olympic gold, the late skip holds an outsized place in curling lore — and the hearts of her teammates

They called her Schmirler the Curler.

As the nickname suggests, the native of tiny Biggar, Sask., stayed true to her roots — down-to-earth and extremely relatable — even as she became one of the brightest stars her sport has ever seen.

"This is a humble province,” says Joan McCusker, the second on Schmirler's rink. “You'd win a Canadian championship or world title and come back to league curling and your cousin or neighbour or grandma would kick your ass. It kept us in check."

Today, after she guided her rink to Canada’s first Olympic gold medal in curling in 1998, and after her untimely death in 2000, Sandra Schmirler's legacy lives on. And her teammates — McCusker, Jan Betker and Marcia Gudereit — still marvel at what they achieved with their beloved skip.

"I don't think we ever envisioned ourselves achieving such lofty goals," says Betker, the team's third. "Who would have ever thought these four women from Saskatchewan would come together and accomplish what they did?"

The rink that would become one of Canada's greatest ever came to life in 1991, when it won its provincial title and the right to represent Saskatchewan at the Scott Tournament of Hearts.

The team's first appearance at Canada’s women's curling championship was somewhat of a learning experience as it placed fourth.

With the Scott being held in Brandon, Man., the Saskatchewan rink made it to the final. There, they faced the hometown favourites — Maureen Bonar's Manitoba squad — in somewhat hostile territory.

"We talked an awful lot about what it was going to be like when we missed a shot,” recalls McCusker.

After taking the '93 Canadian title, Schmirler's foursome would go on to win their first world championship. They'd pull off the double again in '94 and '97.

In late November of the year in which they won that third (and, it turned out, final) world title, Schmirler and company would also qualify to represent Canada at the first-ever women's Olympic curling tournament — thanks to a signature moment by their skip.

In trouble in the seventh end of the final at the Canadian Olympic trials, Schmirler made an incredible shot to score three and go on to defeat Shannon Kleibrink.

The atmosphere in Brandon that day couldn’t have been more different than the one in which the team had captured its first national title four years earlier.

Nobody in the arena wanted them to win in 1993. But when it came time to decide who would represent Canada at the Nagano Olympics, the Manitoba crowd believed in Schmirler’s Saskatchewan rink.

Schmirler celebrated her victory at the Canadian curling trials in late 1997 with her husband, Shannon England, and their daughter, Sara England, who would go on to play in the national junior championships in 2017. (Joe Bryksa/Winnipeg Free Press/Canadian Press)

“We were an established team by then. We were three-time Canadian and world champions," says McCusker.

Fans also connected with the team's ability to keep things loose even in the most tense moments.

"No matter how stressful the situation became, we could rely on our sense of humour and our friendship," says Betker.

While Schmirler and her team had competed and won on the international stage before, the Nagano Olympics presented a new challenge.

"There's nothing like an Olympic Games to ramp up the pressure," says Betker. "You can't imagine what it's like until you're in it."

But in a way, the enormity of being the heavy favourites to win the first Olympic curling gold medal was lost on the Saskatchewan team because they lived in somewhat of a bubble.

McCusker and Betker call it a marriage of four people. They knew everything about one another. They fought battles on and off the ice together. They had children around the same time. They were inseparable, and the pressure of an Olympics wouldn't change that.

"We worked on being best friends," says McCusker. “We didn't need anyone else to entertain us. You'd hear the laughter. We were drinking and screaming with laughter."

Schmirler’s rink cruised through the round robin but found themselves in trouble in the semifinals against Great Britain.

The game came down to an extra end. All Schmirler needed to do was draw her rock to the eight-foot to win — a relatively easy play.

"I've never felt a bigger sense of relief," says McCusker, who tried to calm her skip before the shot by telling her it was "just a regular draw."

"As that rock is going down [the ice] I'm thinking I blew this," McCusker says. "It was me. I'm the one who said just throw normal."

But Schmirler made the shot and the team moved on to the final, where it defeated Denmark 7-5 in nine ends to win the gold medal.

With the women savouring the victory in their bubble far away in Japan, they had no idea what was happening back home in Regina.

When their plane approached the runway at Regina International Airport, the team could see a stream of lights. It quickly became apparent what was unfolding.

"We were shocked," says McCusker. "There were 1,500 people gathered in the airport."

It was a homecoming the team never forgot.

It would also be the last time they returned home together as champions.

After taking some time to think about it after their victory in Nagano, the women decided they would make another run at the Olympics.

Schmirler was always the planner, and she made sure the team was on the same page.

"We planned out the four years," McCusker says. "We said play hard, have a family year, and then get back and qualify for the next trials."

That family year was executed perfectly by the four women. In the span of six months, Gudereit, McCusker, Betker and Schmirler all had children.

“Sandra was due [with her second child] in June, Jan in August, Marci in November, and I was due in December," says McCusker.

Despite their pregnancies, the women all committed to their workout plan, and everything seemed to be going well.

That's when Schmirler started asking her teammates if they were experiencing back pain.

“All the symptoms she was experiencing, you could write off to pregnancy," says McCusker. "She had back pain. She had problems with appetite. Heartburn. She had her baby June 30. The pain went away a bit but came back.

"She was diagnosed in August."

McCusker will never forget the night Schmirler sat each team member down and told them she had cancer.

"What do you do when something so big happens and it happens so fast?"

Sandra Schmirler’s battle with cancer came to an end on March 2, 2000. She died in palliative care in Regina’s Pasqua hospital with her family by her side.

The death of Canada’s “Queen of Curling” sent a wave of sadness through her home province and across the country.

"All Canadians have been touched by the untimely death of Sandra Schmirler,'' Prime Minister Jean Chretien said at the time. ''Most of us came to know her through her exploits as a champion curler and as an exemplary sports ambassador for Canada. But what really set her apart was her bright, engaging personality and her incredible zest for life.''

'The loss was so big'

Schmirler's teammates, meanwhile, struggled with the decision of whether to go on without their leader.

"It was tough," says Betker. "At first I had this feeling that I wanted to compete for her because we had this plan. I wanted to honour that plan that we had together even though she wasn't here."

The team played on, but struggled to find a new identity.

"The loss was so big,” says McCusker. “Everyone didn't know how to handle it so they just left us alone. Which was hard. It was hard to watch the team."

The rink's last major competitive event together was in 2005. With Betker skipping, they competed in the Olympic trials in Halifax, finishing with a 4-5 record.

Perhaps fittingly, Kleibrink, who lost to Schmirler's rink in the final of the first Olympic trials, would win this time and represent Canada at the Olympics in 2006.

Betker, McCusker and Gudereit shared a laugh during a tribute to their late skip at the 2002 Olympics in Salt Lake City. (Adrian Wyld/Canadian Press)

Mike Harris, who won the men's silver medal at the 1998 Olympics, is now a curling analyst for CBC Sports. He thinks the team could have been dominant for many more years had Schmirler been healthy.

"To say they could have won another two or three championships or another Olympics is not far-fetched," says Harris.

"To say they're the best ever wouldn't be a stretch."

Today, the older of Schmirler's two daughters — Sara England, who was born just months before Sandra won the Olympic trials in 1997 — is trying to follow in her mom's footsteps. She played third for Saskatchewan at the 2017 Canadian junior championships.

In January 2001 the Sandra Schmirler Foundation was created. It has now contributed millions of dollars to over 40 Canadian hospitals’ newborn intensive care units in every province and the Northwest Territories.

It's a fitting legacy for Schmirler.

"Sandra had so much empathy,” says McCusker. “She reached out and said how are you feeling? How can I help you?"

Every year since her death, the Scotties Tournament of Hearts has earmarked a day to raise funds for the foundation. This year, Feb. 19 is Sandra Schmirler Day across the country.

And she's never far from the minds of those that loved her.

"She was just so natural all the time. She was who she was all the time. A real genuine person," says Betker. "She always laughed at herself. She made us laugh.