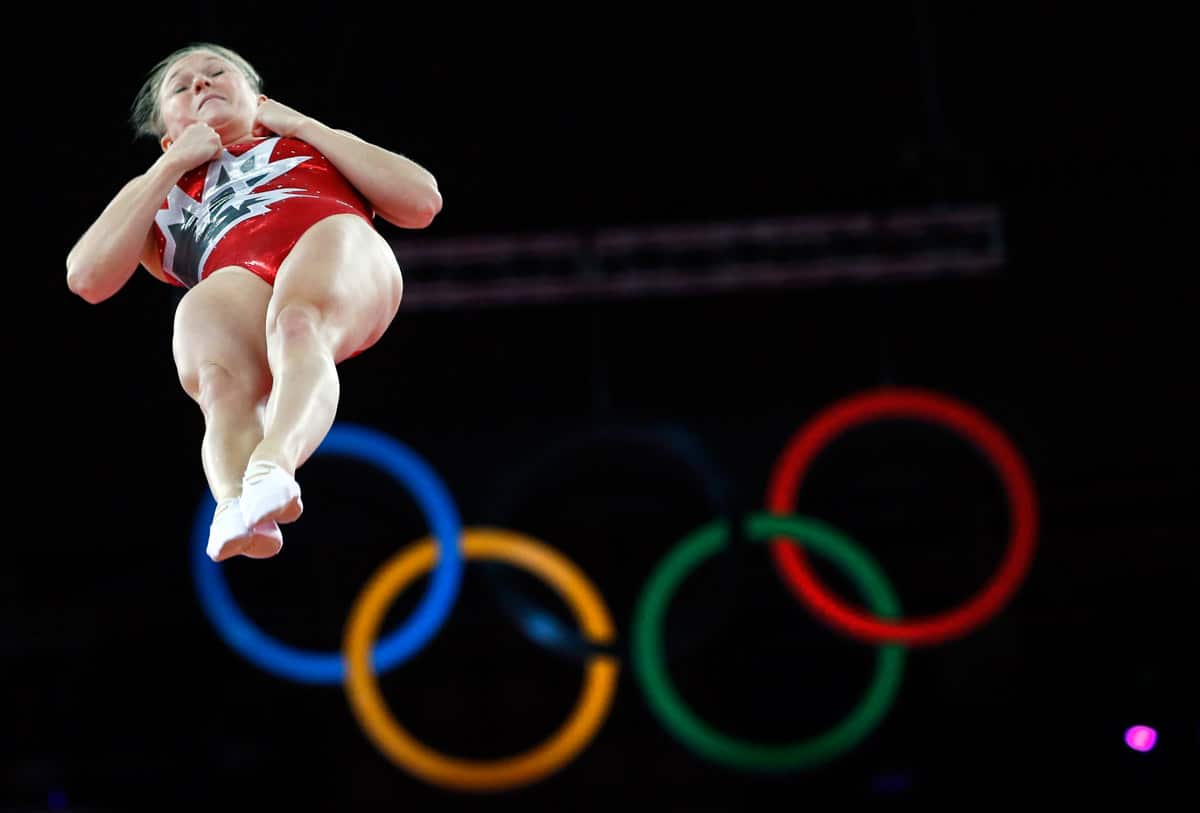 Rosie MacLennan: A leap of faith

The Canadian trampolinist has soared to the top of her sport by trusting in herself, her coach and a special friendship

She's too modest to say it, but Rosie MacLennan is the best women's trampolinist in the world.

You might remember Rosie from the 2012 Olympics in London, where her victory in the women’s individual event gave Canada its only gold medal of the Games.

She's no one-hit wonder, either. The 26-year-old Torontonian also owns the Canadian, Pan American and world titles as she prepares to defend the latter at this weekend’s world championships in Daytona Beach, Fla. (CBC's live coverage starts Saturday at 4:45 p.m. ET.)

But she wasn't always the best. Hers isn't the story of a child prodigy. It's really about fierce determination, overcoming fear, and how a special friendship can lift both people to a higher place.

"Growing up, I was never the best at it," says Rosie, who was seven when she started tagging along to the trampoline gym with her three gymnastics-mad older siblings.

It's not the easiest sport to master. A world-class trampolinist launches herself more than two stories in the air, and lands in a target area that measures about 7 feet by 3.5 feet. Sure, there’s some leeway – the entire trampoline is about 14x9.5 and it’s surrounded by safety padding – but our bodies and brains are hard-wired to scare us away from this stuff.

But Rosie marvelled at the older athletes at her gym, and while she may not have showed the most talent right away, she had something else, something maybe more important, going for her.

"I was never necessarily the fastest to learn skills, I was never the highest jumper. But I was always really stubborn," she says.

As she got better, she got more confident. But the challenges in this sport go beyond just learning new moves.

From an early age, they make you compete in those skin-tight numbers that leave your legs totally exposed and almost nothing else to the imagination – not to the people watching on TV, not to the fans in the stands, not to the judges, not to your competitors looking for any sign of self-doubt so they can knock you off the podium.

But Rosie is a super-fit, world-class athlete. She works out, like, a million hours a week. She’s always been totally comfortable with her body.

“It can be [hard], especially for younger girls who are kind of going through that awkward phase we all go through,” says Rosie, who’s listed at 5-foot-2 and 119 pounds (sounds crazy, but some consider that a bit thick in the waify world of elite gymnastics and trampoline).

“I did at times feel uncomfortable or feel like I didn’t have the right body for the sport, especially standing next to the Russians or the Chinese, who were all at the time a lot smaller than I was and didn’t have the same curves that I have.”

Like any good mom, Rosie’s gave her a pep talk.

“Rather than thinking my legs were bigger than the stick legs the Russians had, my mom would ask me, ‘Well, how do you think you jump so high? You need those powerful legs to get you to jump higher.’ She got me to see [the legs] as an asset. The other thing she said was, ‘Do you want to be the smallest one and fit in with the crowd? Or do you want to be the best trampolinist you can be?’”

“If you’re focused on what you look like in a leotard standing on the trampoline, you’re not focusing on the routine you’re about to do."

Are we having fun yet? Rick Mercer visited Dave Ross's gym before the London Olympics.

Learning those routines takes an incredible amount of work. And guts.

"Fear is definitely a part of our sport,” Rosie says. That's especially true when it comes to trying new tricks – a necessity with foes around the world constantly striving to one-up each other and push the limits of their bodies and of the sport. Like they say: Citius, Altius, Fortius.

When it’s time to add a new element, Rosie and her coach, Dave Ross, take an analytical approach and “break the skill down into more familiar components.” (She’s going for a Masters in exercise science. Can you tell?)

Among the tools at Ross’s training facility in the Toronto suburb of Richmond Hill are a bungee system that allows strapped-in athletes to slow their bounce, and a supertramp that gives them more time in the air. Plus there are padded pits to soften landings should something go awry.

But eventually, “you have to face the fear and say ‘forget it’ and have the courage to trust your body and trust yourself, trust your preparation, trust the coach and give it a shot,” Rosie says.

Trust the coach. That’s something Rosie has no problem with. She credits Ross, who trains every member of the Canadian team heading to this year's world championships, with creating a “very friendly” gym environment.

“Dave really drives internal motivation and he really keeps the fun in the sport,” Rosie says. “It's not our job. It's something we all love to do and we're there because we want to be there, we want to be pushing ourselves.”

The result is an all-for-one mentality among the Canadian teammates.

“The dynamic in our gym is very friendly. We all support each other, we all push each other,” Rosie says. “Even though at the end of the day we're all competing against each other, we really focus on the team aspect of it, because working together as a team we're going to be much stronger, much better than if we approached it as an individual sport.”

Rosie and Karen performed together in the synchro event at the 2011 Canadian championships.

One teammate in particular has made an immeasurable impact on Rosie's work and her life.

Back when Rosie was just a girl learning the sport, she looked up to a trampolinist six years her senior who trained at the same gym. As Rosie watched her idol climb the international ranks, she could imagine the possibilities for her own career.

And when trampoline finally got on the Olympic program in 2000 in Sydney, Karen Cockburn won a bronze medal, then added silvers in 2004 in Athens and 2008 in Beijing, where Rosie made her Olympic debut and finished seventh.

“I always had a dream of being an Olympian, but when I started, trampoline wasn't an Olympic sport,” Rosie says. “When I saw Karen win a bronze medal [in Sydney] that made it very real. This was a girl from my gym who had accomplished this. I saw that it was possible.”

Even better, Karen turned out to be as generous as she was talented and dedicated to her sport.

“She's guided my career ever since I was nine years old and almost too scared to chat with her because I was a little kid,” Rosie says. “She's very experienced and has a lot of knowledge about the sport and she’s very keen on sharing that with the athletes around her. As a youth athlete she would always give me advice and encourage me to try new tricks or a different routine.”

“There’s no way I would have gotten to where I am without working with her.”

As Rosie got older (and better) she became Karen’s peer. They teamed up to take a silver medal in the synchronized competition (a non-Olympic event) at the 2005 world championships, then won  gold in 2007 in Quebec City and added a couple more silvers in 2009 and ’11.

At some point along the way, the student taught the teacher a few lessons. It raised both to heights they perhaps couldn't have reached on their own.

"As I got a bit older we started pushing each other to try and reach that next level," Rosie says. "I guess with me kind of chasing after her, it pushed her and encouraged her to try some bigger things."

“I’ve learned just as much from her as she has from me,” she says. “We complement each other well as teammates because although we have a lot of similarities we do have different strengths. She pushes me out of my comfort zone when I’m scared. I help her think through strategies and calm her down if her mind is racing.”

“It's nice and rare to have a teammate that you trust completely even though you’re competing against each other.”

Rosie says there's "no way" she'd be where she is without Karen's support. (Gregory Bull/Associated Press)

Rosie overtook her teammate, friend and mentor at the 2012 London Olympics, where she upset a pair of Chinese rivals by nailing a difficult routine that won her the gold with a score that still hasn’t been matched by any woman.

Karen finished fourth, just missing what would have been her fourth consecutive Olympic medal. But seeing her reaction when she realized Rosie had won, tears of joy in her eyes, it's hard to imagine Karen being happier if she herself had reached the top of the podium.

After the Olympics, Karen took a couple of years off to start a family, during which time Rosie won her first world title last year in Bulgaria.

Karen returned this season and hoped to challenge Rosie at worlds, but she broke her ankle during a practice session in Daytona and had to return to Toronto for surgery.

If she's able to launch another comeback, you know who'll be in her corner.

“Rosie has been really supportive during my comeback this year,” Karen says “Watching her train every day has motivated me to get back to this world-class level.”