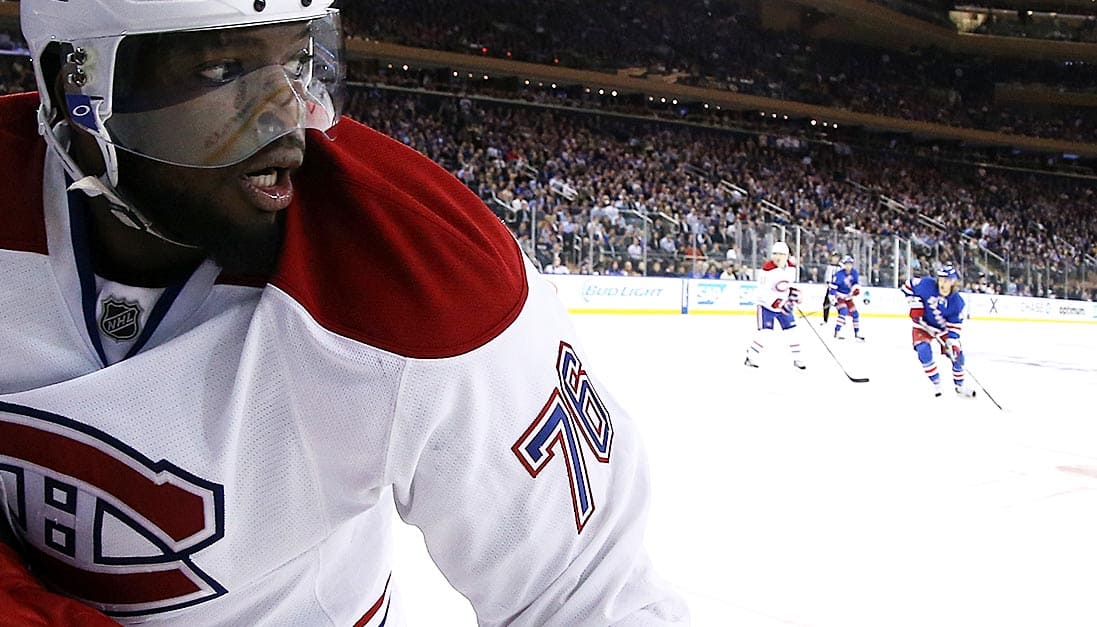 He’s Montreal’s most eligible bachelor and he’s not shy about it. The Habs stud D-man might be exactly what the team needs.

It's good to be P.K. Subban these days. (Ryan Remiorz/Getty Images)

Defining a hockey player’s true value is next to impossible.

How much do a player’s individual statistics play into the calculation? How much does that player influence his team’s victories? How much should his potential be worth? And should his popularity with the fans play a role?

That was the situation Montreal Canadiens general manager Marc Bergevin found himself in this summer when his standout defenceman P.K. Subban, a restricted free agent, elected to take his team to salary arbitration.

Subban and his agent Don Meehan sought a lucrative, long-term contract with a salary that was among the game’s best. Bergevin wasn’t convinced, even though he knew the impressive resume of his 25-year-old stud defenceman.

Subban won the 2013 Norris Trophy. He was named to the Canadian Olympic team last winter, but dressed for only one game. In his first five pro seasons, Subban helped the Habs advance to a pair of Eastern Conference finals.

With the date for Subban’s salary arbitration approaching on Friday, Aug.1, the two sides haggled to no avail. The next step was for Bergevin to sit across the table from Subban, present his case to an independent arbitrator as to why he believed his valued employee was worth less.

Legend has it that when Mike Milbury was general manager of the New York Islanders, he lambasted goalie Tommy Salo with such hurtful insults in their hearing that Salo fought back tears.

Subban is known, and often criticized, for his over-the-top celebrations. (Graham Hughes/Canadian Press)

In the days leading up to the Canadiens versus Subban arbitration, the two sides exchanged briefs. Subban’s agent argued his player deserved a one-year, $8.5-million deal. The Habs countered a case for a $5.25-million salary.

For three hours, Bergevin and his suits sat across from Subban and his suits in a meeting room in a downtown Toronto hotel. The two sides debated and discussed and then departed into a steamy afternoon, wondering what the arbitrator’s decision would be 48 hours later.

Subban emerged from the meeting seemingly unfazed as he met a pack of reporters.
“I’ve never been through this process before,” he said. “To have to go through it now, obviously, I’ve been through many different processes before in my career, but I’ve ultimately come out of it stronger and ready to continue to get better.”

The arbitrator never did file his ruling in the matter. Subban and the Canadiens agreed on a contract the next day. The defenceman had been awarded the richest contract in the storied franchise’s history, an eight-year, $72-million whopper.

(Subban’s average of $9 million per season makes him one of the highest paid in the game. Only Alex Ovechkin and Evgeni Malkin are larger cap hits for the 2014-15 season.)

P.K.'s father, Karl Subban, talks about the "kind and caring" program he was involved with as principal at Brookview Middle School in Toronto.

When P.K’s father, Karl, was 11, his parents emigrated from Jamaica to Sudbury, Ont. His uncle was an electrician working for Inco, and there were plenty of jobs in the mining industry in Northern Ontario back in the early 1970s.

The Subbans settled in the Flour Mill neighbourhood, a francophone community with lots of kids and a rink at the end of Peter Street.

It didn't take long for Karl Subban to wrap his arms around the neighbourhood's passion for hockey and the Montreal Canadiens. His parents bought him a pair of skates from the local Salvation Army store and he immediately was lured to the rink.

“It was a wonderful neighbourhood,” Karl told me a few years ago. “I was lucky that the other kids included me in their games.

“I was young enough to pick up [the sport]. I was Ken Dryden, the goalie, and thought I was playing in the NHL. That's all that mattered.”

Karl eventually moved to Toronto to pursue a teaching career. When his wife Maria gave birth to the couple’s third child, many were surprised Karl didn’t name his first son Guy or Maurice or Serge or Larry or Bob after one of his beloved Habs.

But, as the story goes, the couple didn’t have a name ready.

“My wife was reading one of those movie magazines,” Karl said. “We saw the name Pernell Roberts, you know the guy who [portrayed Adam Cartwright] on Bonanza? We immediately liked the name.”

In an appearance on George StroumboulopoulosTonight, Subban spoke about the importance of family.

Young Pernell Karl Subban was shortened to P.K. Subban. But the middle name wasn’t the only thing father passed on to his son.

The Subbans are a tight-knit family. When Karl retired as principal of Claireville Junior School 15 months ago, his two daughters and three sons showed up to help celebrate the end of an era.

“For me, because P.K. comes from a good family that has good values, I don’t worry about his future,” said Dany Dube, a former Canadian national team coach who has spent the last several years as the Habs French-language radio analyst. “He’s always talking about his brothers [Jordan and Malcolm] and how they are doing and about his family. He’s proud of his family.”

In hindsight, P.K. Subban’s parents probably knew what they were doing when they named him after an actor. Is there any player in the NHL who has Subban’s Hollywood-like charisma?

But with this larger-than-life-personality comes criticism. Hockey is a conservative sport with plenty of old school ways. Subban can rub the traditionalists the wrong way with his exuberant displays, like his goal celebrations when he tugs on the Habs logo on the front of his sweater.

“I didn’t like him then and that hasn’t changed,” Montreal defenceman Mike Weaver said with a sly smile, when asked for his opinion of Subban as an opponent and how that has changed now that the two are teammates.

“He’s a guy who gets in your face all the time. He’s stubborn. He’s not nice to play against. He’s a player who is fast. He has a big shot. You have to be aware of him when he’s on the ice.

”I got him once with a hit, and when I was traded to Montreal last year, the first thing he did was remind me of it.”

It’s obvious Subban is not your average star NHL player. While Sidney Crosby retreats to Nova Scotia for the summer and Jonathan Toews keeps a low profile, Subban is out in the public eye.

He has been a weatherman on television, done red-carpet interviews for the NHL at the annual awards evening in Las Vegas and tried his hand at sports broadcasting.

He is also proud of the three-year association with Hyundai Hockey Helpers, a charity that has helped more than 5,000 kids with the high cost of registration fees and hockey equipment.

Just before the 2014-15 NHL season started, he appeared on the French-language Radio-Canada TV show, Tout le Monde en Parle. The city’s most eligible bachelor was eloquent, charming and funny, dealing with topics ranging from racial incidents to French lessons to Montreal women to his desire to improve on the ice.

But the only part of the lengthy interview that received much attention was Subban’s comments about passing gas on the ice. Because of what he eats on game days and the amount of coffee he consumes, Subban said he has let out the occasional flatulence on the ice to disturb opponents.

There was nothing stinky when the Habs brass decided to make Subban an alternate captain in training camp, along with veterans Tomas Plekanec, Andrei Markov and Max Pacioretty.

It’s an honour that Subban takes seriously and his teammates already have noticed a difference in him this year.

“You can see the difference in the way he’s handled himself in the dressing room.”

The Habs faithful seems to love the way Subban has handled his on-ice affairs. They admire his enthusiasm, his risk taking, his dynamic play.

They even let him off the hook in the East final when the New York Rangers kept Subban from being the factor he was in the previous round against the Boston Bruins.

“The fans have always been supportive,” Subban said. “Now as far as critics go, everybody has critics. But the fans have never been a critic of mine. I think they’ve been only supportive and I hope that continues.”

But sometimes a hefty paycheque results in heavy expectations.

Subban doesn’t seem bothered by the added pressure. He never has.

He followed up his Norris Trophy season with an outstanding 2013-14 campaign. He was probably at his best in the second round against the Bruins, especially when he wasn’t shy with his pre-Game 7 comments about playing in a hostile environment like the TD Garden.

“I can’t wait for the crowd, the noise, the energy in the building,” he said. “I can’t wait to take that away from them.”

The expectations for Subban from the fans or reporters may be gaudy point totals, booming shots, end-to-end rushes or more Norris Trophies. But you won’t find Subban worried or getting weighed down by these ideals.

He knows what is important now. He knows that through his friendship with Hall of Fame defenceman Paul Coffey that a successful player is measured through championships -- and championships come from teammates playing well together.

"I don’t think [the microscope] can get any bigger," Subban said.

"It’s not just me out there. We have a wealth of veteran players on our team, a wealth of talent in this organization that’s going to help us win hockey games. It’s not just about one player."

But Subban might just be that one player the Habs need to get over the hump of the Conference Finals and fight for the Stanley Cup.