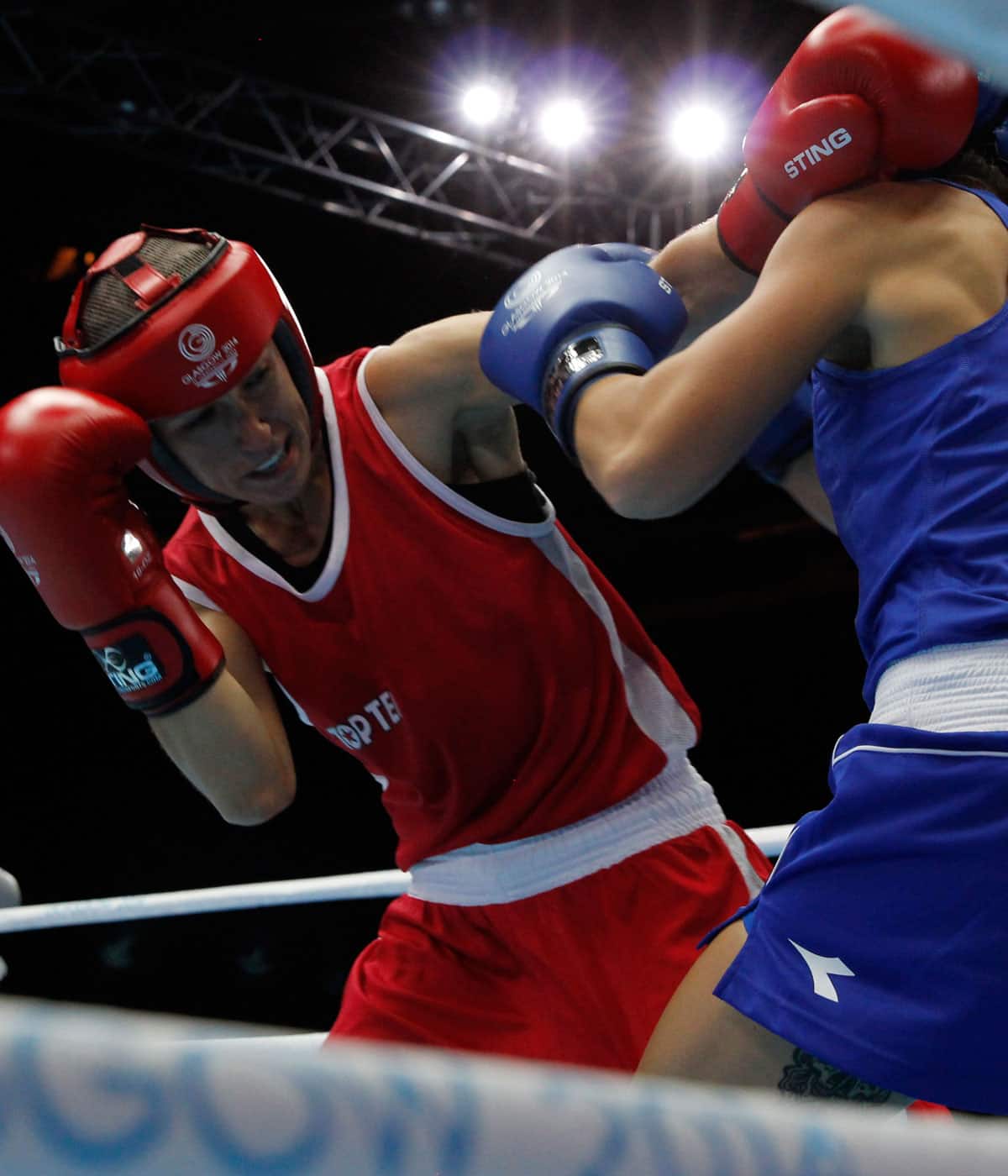 Failure isn't an option in her mind. It simply can't be.

Mandy Bujold is all sound and fury as she works in the ring at the Atlas Boxing Club on a cold Friday night.

Practicing combinations, smacking her gloves against the hand pads of Adrian Teodorescu, moving in and out as the legendary coach changes the target.

Each combination by Bujold, nine-times women’s flyweight champ in Canada, is accompanied by loud exhalations, ones that freaked international judges out so much they were docking her points for “talking” in the ring until it was explained to them.

Bujold, wearing her trademark kerchief, goes for a little walk around the low-ceilinged ring, one that dominates the back room of the industrial mall location near the fancy Yorkdale Mall in the northwest of town. Teodorescu comes to the ringside correspondent.

“Remember we were talking before about the power of the punch?” he says quietly, gesturing at his prized pupil. “No other woman in the world can do that.”

Bujold already has a number of accomplishments in the squared circle.

In 2011, the Kitchener resident fought in the first women’s boxing match ever held as part of a major multi-sport competition – ultimately winning a gold medal for Canada at those Pan Am Games at Guadalajara.

She just missed out on making the London Olympics, but she won a Commonwealth Games bronze medal in Glasgow, after losing in the semifinal to Olympic champion Nicola Adams.

Now, she is on course for TO2015 this July, followed by the ultimate goal – Rio de Janeiro and the 2016 Summer Games.

Mandy Bujold looks you right in the eye.

Whether it’s in the ring before a fight, or in an office, not far from the madding crowd still working out at the gym, there is no hiding, no doubt, no furtive glances over your shoulder.

No fear may be an old advertising hook, long past it’s time, but it still fits here.

“I don’t think I’ve ever been afraid [in the ring],” she says. “I’ve been nervous wanting to perform, or not sure … but one of the things me and my sports psychologist talk about is to respect all and fear none.

“That’s definitely something I work on.”

This is only half the story though, because there are two gloved competitors out there, about to do something we’re trained not to – invade another’s personal space. And do it with aggressive intention.

Has Bujold ever looked into someone’s eyes before a fight and been able to tell they were already beaten?

“Yes, absolutely,” she says, straight down the eye contact. “That’s happened a lot.”

Such as the AIBA Women’s World Championships in Korea, back in November, where the first round opponent in 51 kg was Kim Ye-ji of the host country.

“She did not want to be there,” said Bujold. “The first round was good but then I saw her walk back to her corner with her head down. And when I started landing good shots you could tell she was just trying to survive.

“Sometimes, like before the fight even starts … you can look over at your opponent and you can read them, can see what they’re thinking and a lot of times I can tell sometimes … OK, I’m going to win this fight just by the way they are looking in the corner.”

Those world championships have stuck in the craw of the 27-year-old fighter, by the way, and will be part of her focus moving forward. After sailing by her first round opponent and beating Lin Yu-ting of Taiwan in the second, the tough Lisa Whiteside entered the ring for the third fight and won on a split decision.

Bujold, there without her experienced and influential coach because money is so short in the Canadian boxing game, was convinced she had beaten the Englishwoman and earned at least a world bronze.

The decision went the other way, Whiteside continued on to the gold medal match where she lost to American Marlen Esparza.

At the Pan Am Games in Toronto, the ring officials will be under different influences, such as the presence of Teodorescu (who took Lennox Lewis to an Olympic gold medal for Canada, and Egerton Marcus to a silver), and a large group of family members and friends from Kitchener.

“I think there will be a good hundred people there to see me fight [at the Oshawa Sports Centre],” she says, eyes twinkling at the prospect.

They will include her father, Roger, who works in construction, her mother, Brigitte, who cleans houses, and her older brothers, including Eric, who was the first who got into boxing before Mandy took over and made it her own.

Though the Pan Ams will be an Olympic qualifier for some sports, women’s boxing has a different, two-opportunity approach that begins with the World Championships in early 2016.

Esparza, the newly crowned global titlist will be among the Olympic favourites for 2016. Bujold herself is another, along with Brazilian Celia Costa.

All three could also be at the Toronto Pan Am Games.

However, to go through they have to medal at the worlds in Kazakhstan. If that doesn’t happen there’s a continental qualifier in Argentina.

Complicated, but everyone around Bujold is convinced she can do it.

And if she doesn’t?

“I don’t even want to think about it,” she says, shaking her head. “I don’t think there’s any chance [I won’t]. The Olympics are my goal for 2016, and after I want to have kids and have a family.”

If it all happens, dedication, speed and punching power will do it.

Ask those who are closest to her – such as the male sparring partners (all top women boxers spar with men) who invade her personal space every time she works out.

The southpaw partner is P.G. Tondo, Canadian champion at 49 KG. From the right side it’s Mike Cabato, a teenaged future star who already has the provincial bronze medal and is the son of former Phillipine pro Amado Cabato.

“[Mandy] is fast and aggressive,” says the younger Cabato. “It’s not only her speed, it’s her footwork. What makes her strong is, she’s always in and out, she’s always jabbing, she’s always setting things up with her jab.”

Any chance you might be taking it a bit easy because she’s a woman?

“No, she boxes like a man because she’s really fast. [Her speed] plays a big role for her.”

That speed is going to be needed, on the long journey through Toronto, Kazakhstan and into the station at Rio.

If you haven’t seen amateur men’s boxing for a while, the Pan Am Games will be something of a revelation.

Between the introduction of the “10-point must” scoring system used in the pro game, and the elimination of the padded headgear, this actually is your father’s pugilism.

It’s done wonders for the career of Samir (Sweet Sammy) el-Mais, the Canadian heavyweight champion who won a Commonwealth Games gold medal in his category at Glasgow last summer.

Men’s amateur boxing was criticized for years as being about as exciting as a sparring session. The more punches you threw, the more you tended to score.

Ring tactics, control, body blows that set up headshots were not in this game.

“When they switched into the 10-9 scoring system first (the winner of each round MUST be award 10 and the loser a lesser amount) it was pretty much the same thing,” says el-Mais, on the phone from his training base at Windsor, Ont. “But when we took off the head gear, everything changed.

“You had to attack more … those were your points – attacking, landing, being in control of the ring, control of the fight, and moving forward – positive things [have] to happen for you to win the round.”

It also took away the focus on the head as the key scoring location.

The AIBA, boxing’s world body, said removing the head gear would actually make things safer by reducing concussions, and the jury is out on that (though it is deliberating through injury stats, concussion incidences, etc.).

El-Mais says boxers would actually lead with their heads at times under the old rules, willing to trade a blow to counter with two. Now, they have to concentrate on the whole body and proper ring tactics.

On the negative side, boxers seem to be suffering more cuts. Such as the nasty one Sweet Sammy had in the first bout at Glasgow against Warren Baister of England, one the ring doctor allowed him to continue with.

He continued all the way to the gold.

Commentators believe there was more to it than just safety, however. Boxing, as a sport, has been hurt by the growth of interest in the much more violent, and bloodier, Mixed Martial Arts.

Taking the head gear off is a first step to getting it back. And for some boxers it’s more fun,

“I’ve thought about this a long time,” says el-Mais. “You start seeing a little more blood, you start seeing a No. 1 in the world taking charge and then, one punch, one cut will change the whole fight, you see the way speaking with the body has changed.”

The International Olympic Committee has not as yet decided whether to permit boxing without headgear for Rio in 2016. How thing go in Toronto this year may go a long way to a final decision.

AIBA officials are also waiting to see how things go in the men’s game before making a decision to take head gear off women fighters.