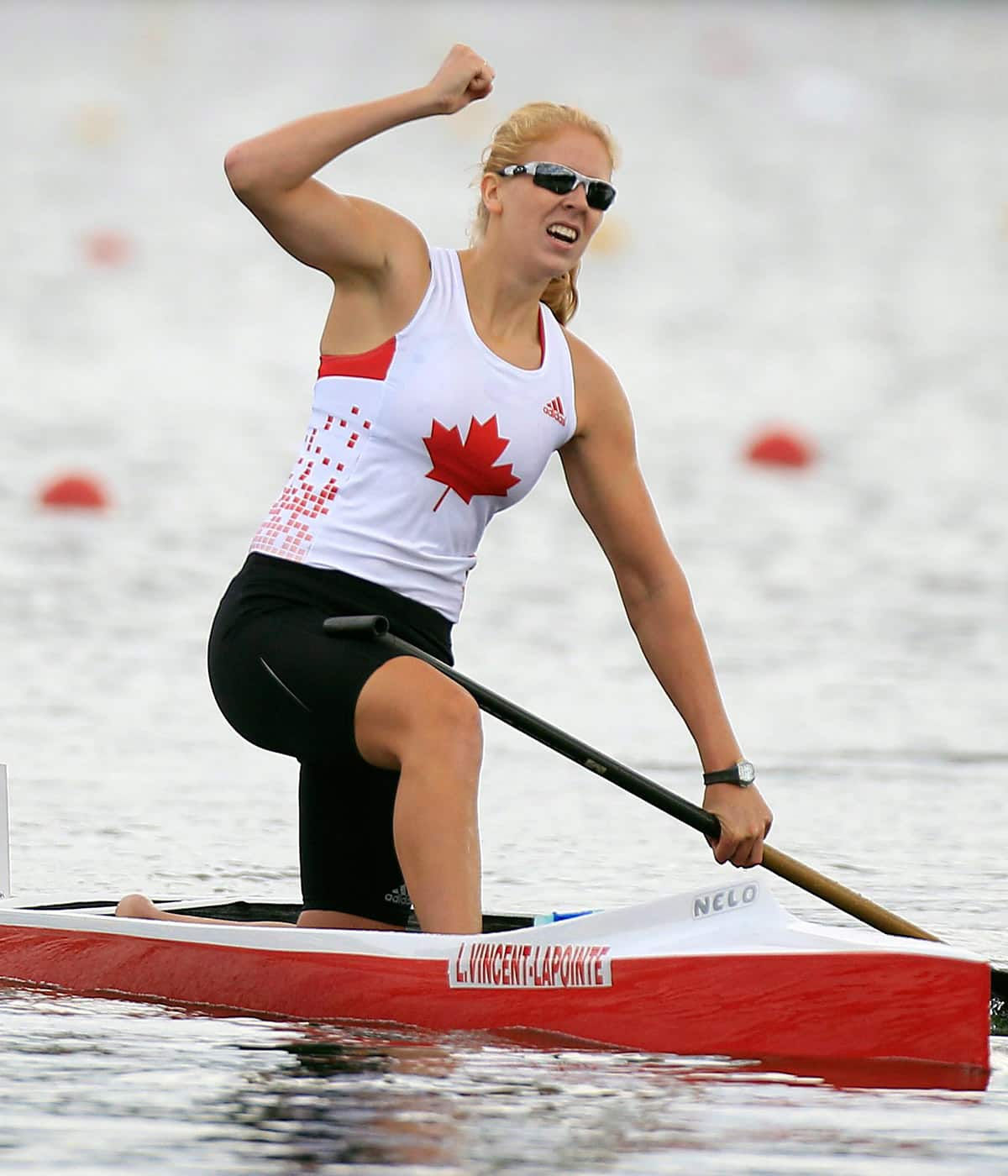 Laurence Vincent-Lapointe navigating the waters of an uncertain future

Winning is everything to Laurence Vincent-Lapointe, but it could mean so much more — or nothing at all.

The native of Trois Rivieres, Que., was 18 and hitting her stride when women’s sprint canoeing made its inaugural appearance at the world championships in 2010.

Fast-forward five years, and Vincent-Lapointe is the most dominant athlete in her sport, just as it’s about to debut in the Pan Am Games in July.

However, inclusion of women’s canoe in the Olympics has yet to be allowed by the IOC, something the 23 year old has been vocal about and believes is long overdue.

“What I am sad about is that we have been working hard the last few years to make sure that we would be ready whenever they wanted us to race,” Vincent-Lapointe tells CBCSports.ca on the phone from Portugal.

Even though that hopeful date is still years away, those close to Vincent-Lapointe believe she has the focus and ability to perform at a high level and extend her career beyond the length history seems to suggest for female paddlers.

It’s an assessment that bodes well for Vincent-Lapointe and her overwhelming desire to compete in those 2020 Olympic Games.

It’s also a positive outlook that goes against the reality encountered by elite athletes in years gone by.

Former Canadian canoe star Mallorie Nicholson, right, believes Vincent-Lapointe can dominate her sport in 2020, when the Quebec native would be 28. (Tibor Illyes/Associated Press)

The most pertinent comparison is to Canadian wrestling legend Christine Nordhagen, a six-time world champion who was instrumental in getting women’s wrestling secured for the 2004 Athens Olympics.

Once the dominant athlete in her sport, Nordhagen was dealing with failing knees when she finally got to appear on the world’s biggest stage at the age of 33.

Yet she was a shell of her former world championship form.

After barely qualifying for the Olympics, she finished fifth in Athens, missing out on a chance to compete in the medal round.

Yet it seems that Vincent-Lapointe’s journey has a chance to end differently than it did for Nordhagen.

Since this is the first generation of international competition for women’s canoeing, Mallorie Nicholson, a Canadian who competed with and against Vincent-Lapointe, says there is still a lot to be determined about the career span for a female canoeist.

For instance, she points to men’s kayaking and canoeing where the peak performance age is late 20s to early 30s. Vincent-Lapointe will be 28 by the time the Olympics arrive in 2020.

Above all, Nicholson is confident that Vincent-Lapointe can rise to the challenge.

“Physically there is no reason that Laurence couldn’t be at Tokyo 2020,” she says. “I think the challenge will be just maintaining that focus and that drive for that length of time.”

Of course, this all hinges on women’s sprint canoe gaining Olympic inclusion in five years.

Either way, Vincent-Lapointe emphasizes that she will continue to compete, but there is no mistaking the determination in her voice when she speaks about how things will unfold if the IOC doesn’t include her sport for 2020.

“They [the IOC] always talk about how they have to make it equal for men and women, so if they suddenly say to us that it’s not going to be in, it would be the stupidest move ever from them.

“Everyone would be so pissed. I would just start a petition and ask for everyone to sign it. It can’t happen, I won’t let it happen.”

Looking back on Lapointe’s journey, from paddling for fun at her local club to performing internationally, it’s easy to rally around her desire to compete in the Olympics.

On the outside, coaches and teammates alike describe Vincent-Lapointe as having a happy-go-lucky personality, although there is no mistaking her ultimate goal as a competitor.

”Laurence was very consistent, you knew what you were going to get against her,” says Nicholson.

“She’s there to win and very much wants to win, but in the boat bay when we are getting ready she doesn’t have an intense vibe, she is still very friendly and joking and bouncing around.”

But for Vincent-Lapointe, who also mentions that she is referred to by peers as “smiley,” the trek to the world stage hasn’t always been a laughing matter.

Having outgrown the age for day camp, Vincent-Lapointe, then 13, was strongly encouraged by her parents to choose an outdoor activity as opposed to staying indoors on the computer.

“I had to do something, and my friends started doing it [paddling], so I went and I liked it,” says Vincent-Lapointe.

“At first I was really, really bad because I was tall so it was hard for me to keep my balance and I didn’t like kayaking, I didn’t like it at all.

“I would keep tipping and in canoe too, even more in canoe, but I liked it, it was more of a challenge to do canoeing. I kept going, but it took me two years of falling before I went a practice without falling.”

That perseverance paid off for Vincent-Lapointe, but the early stages also required a lot of patience. In the beginning, it wasn’t even a matter of wanting to be a competitor, the goal was much simpler.

“It wasn’t about wanting to race, it was just staying in my boat. So many times in doing the practices I would stop and go to the dock and throw my paddles away and just walk back home.

“The coaches would be like ‘ok, I don’t think she’s going to ever be a canoer,’ but I just kept going because I was really mad that I couldn’t stay in my boat.”

Once Vincent-Lapointe was able to grasp the technique of paddling, it was off to the races, both literally and figuratively speaking.

As an 18 year old, Vincent-Lapointe was competing in senior events, when the usual path might have been to stick to the under-23 circuit.

Despite going up against competitors as much as five years older, Vincent-Lapointe credits her early success to the people around her.

“When I started in 2010, I was not as mature as now, but it was really nice because everybody on the team was really good to me. They all helped me to get through the races.”

More than just getting through the races, Vincent-Lapointe was dominating her competitors and establishing herself as the premier athlete in sprint canoe right from the start.

At 23, her accomplishments already read like a “Hall-of-Fame” resume. Vincent-Lapointe took gold in the C1-200 metres in 2010, her first year competing at the world championships and she has won every year since then with the exception of 2012. In addition to her individual success, she is also a three-time world champion in the C2-500m event.

In many ways, Vincent-Lapointe picked up where her former teammate Nicholson left off.

A member of the Burloak Canoe Club Wall of Fame in British Columbia, which also includes Adam van Koeverden and Mark Oldershaw, Nicholson was the face of women’s canoe in Canada until passing the torch to Vincent-Lapointe.

Nicholson, who retired in 2012 but now sits on the high performance committee responsible for establishing the selection criteria for Team Canada, admits that while the transition was humbling, she was happy to share her experience and technical knowledge with Vincent-Lapointe.

Three years after retiring to focus on her studies (she now works in alternative dispute resolution), Nicholson, 28, provides an honest perspective of what it feels like to walk away from competition.

“I think every athlete…nobody gets the perfect go-out on top and having achieved everything they ever wanted to achieve in their sporting career, it just doesn’t happen for 99 per cent of people,” says Nicholson.

“You are always going to wonder if things might have been different if you had done this or done that, but in the end you just have to gather up what’s left of your dignity after so many years of competition and just go about your life.”

In Portugal, Vincent-Lapointe is feeling like she always does in the days leading up to a race, in this case the season’s first World Cup event.

“I usually feel like crap,” says Vincent-Lapointe. “All week long and even on the day of the race I feel really, really bad and I keep asking myself why I do this?”

That feeling of stress has become normal for Vincent-Lapointe, and it clearly doesn’t hinder her ability to race, as she would go on to win gold yet again. What was different this time around was that she was balancing her need to prepare for competition while also awaiting word of her acceptance to the waiting list for medical school.

Paddles to a stethoscope

Vincent-Lapointe says that she knew long before she began paddling that she wanted to be a doctor. The first step towards that goal was completed earlier this spring, when she graduated from the University of Montreal with a degree in biomedical sciences.

While it’s difficult to fathom that the determination to finish her undergraduate studies on time may have actually curtailed Vincent-Lapointe’s athletic performance, her coach Mathieu Pelletier believes that she may just be scratching the surface.

Given more time to train, which is what Vincent-Lapointe is aiming for in the off-seasons to come, the belief is that she can become even faster.

Along those lines, Pelletier sees an advantage to the time constraints Vincent-Lapointe faced over the past four years while in school.

“The last couple years she had to slow down her training volume in the off-season, so it helped her body to heal a little bit and to rest a little bit more,” says Pelletier.

“So she will be able to keep going a year or two more than she could have because of those slowdowns.”

Vincent-Lapointe can only hope that a few extra years spent on the water lead to a meaningful end.