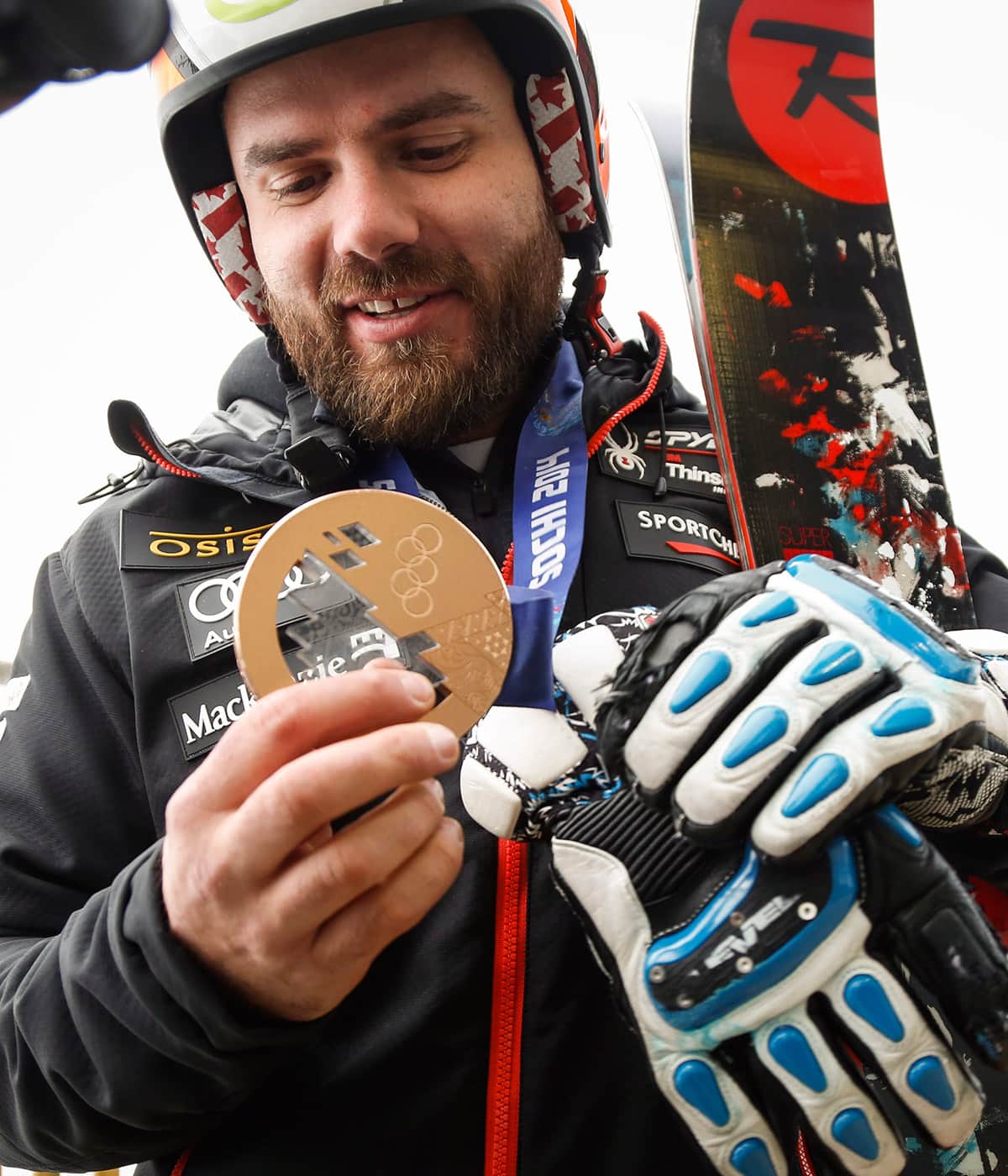 Jan Hudec: An inside look at his Olympic resolve

Jan Hudec had a promising start to the Olympic season with a World Cup silver medal in the super-G event on Dec. 13/2103 in Val Gardena, Italy. (Francis Bompard/Getty Images)

Jan Hudec settled into the start gate, ready for his Olympic moment.

He took a final deep breath as the timer beeped down.

But it almost never happened. Logic dictated it shouldn’t have happened.

Hudec found brief liberation in the lead-up to the 2014 Sochi Games from his injury-ravaged body.

The Calgary skier was already in mid-season form, concluding 2013 with three top-10 results, including a super-G silver medal in Val Gardena, Italy just before Christmas.

The focus for earlier 2014 was races in Wengen, Switzerland and Kitzbuhel, Austria – alpine skiing’s Holy Grail.

The Olympics were his furthest thought.

Injuries kept him away from the 2002 and 2006 Winter Games. He did race at the 2010 Vancouver Olympics, but a lingering knee injury wiped out any hope of a medal.

“The Olympics weren’t anywhere on the radar for results,” the 33-year-old admitted to CBCSports.ca.

His Olympic mood perked up when he came home for a week of training in January. Media coverage intensified and people who wouldn’t know a ski pole from a bunny hill were suddenly paying attention.

“Now I’m getting pumped for it,” he beamed.

The day of Jan. 8 – exactly 32 days before the Olympic downhill race – seemed routine enough. Hudec was to work out before taking a later flight to Europe.

Plans, however, were replaced with panic.

“I finished lifting weights and I was doing some agility stuff and plyometric jumps,” explained Hudec. “And halfway through the sets I literally just lost focus for a split second and landed kind of weird. My entire back just kind of tilted forward. I was on the floor and I couldn’t move.”

Hudec heard his back “crack a little bit.” It was bad, though he refused to remain sprawled on the floor, completely helpless in front of inquisitive eyes.

He struggled to his feet, walked gingerly to a post, and waited to be rescued by “the two biggest guys,” who carried him to the car and drove to the only available clinic in town. Ex-skier and physiotherapist Joan Wilson initially took him in, making sure Hudec didn’t do anything “stupid” while he was incapacitated.

“I’m supposed to go to the Olympics and now this is like the end of the season here… possibility my career,” he thought.

The diagnosis was a herniated disk. Two others – one above and one below – were bulged.

Thirty one days to Sochi. The countdown was on.

His emotions ranged from despair to disbelief. After all the knee surgeries – seven in total – he’s braved, the Olympics were to be his payoff.

“There has to be a way I can get out of this,” Hudec reasoned. “I just had to hang onto that one tiny little piece of glimmer of hope.”

But could Sochi be possible?

The first three days were brutal. Hudec couldn’t get out of bed without assistance. He was in excruciating pain and received round-the-clock attention.

“One second you’re the best you’ve ever felt, strongest you’ve ever been, and all of the sudden you’re completely debilitated, basically living the life of a paraplegic.”

Sochi was now less than four weeks away, a thought that seemed impossible for Hudec. Nevertheless, his team set out an aggressive plan.

Massages, needles (Intra-Muscular Stimulation), acupuncture, heat, ice were all part of the protocol.

“At this point, every day, every minute is precious with absolutely no guarantee with how I’m going to feel in four days, or a week or three weeks.”

Hudec received six months’ worth of injections in five or six days. By using cortisone and PRP (platelet-rich plasma) injections inflammation around the spine diminished.

Sitting in his car, Hudec got word from good friend and CBC Sports skiing analyst Kerrin Lee-Gartner there was an expectation that he was pulling the plug on the Olympics. An angered Hudec agreed to do an interview but refused to make any such comment.

“It’s just not in my nature and I honestly believe that it’s my destiny to be there. So why would I stop now?” he asked.

The interview took place where Hudec was doing his physiotherapy. Lee-Gartner got a bird's-eye view of the severe bruising and needle injections in his back. Even so, Lee-Gartner, herself an Olympic gold medallist in 1992, could sense an air of defiance in Hudec.

“There was just a special something in the look in his eye, in his answers – on camera and off – there was a very special vibe he was giving that not everybody has,” she recounted.

Hudec flew to Europe on Jan. 20. He couldn’t go cold turkey into Sochi. He needed to race.

He already missed Wengen and the notorious Kitzbuhel downhill can be a minefield for top skiers, much less someone in Hudec’s condition.

Following a meticulous training regimen Hudec targeted the super-G event – his specialty – in Kitzbuhel on the Friday. Bad weather postponed the event to an easier hill because the more difficult super-G course didn’t have enough snow.

Finally, the Canadian caught a break.

Hudec finished 29th but was only 8/10ths of a second off the leaders. Reporters queried his state of mind after what they perceived to be a "dismal showing.” To Hudec, though, the top-30 effort was gold.

He was ecstatic. More importantly, Sochi was now a reality.

“Winning wasn’t the priority at all," he said. "It was like if my back can hold up in this race, that’s winning. From there, the confidence level just rose.”

On top of that, the steep hills could wreak havoc on Hudec’s fragile back. He finished 20th in the downhill event on Feb. 9. Similar to Kitzbuhel, reporters prodded the Canadian to get a sense if disappointment had set in.

After a day of rest, he began training for the biggest race of his life – the Olympic super-G scheduled for Feb. 16. The week between events was just the tonic for Hudec: enough rest, more physio, more training in the gym, no skiing.

The day before the race, a coach on the Canadian team filmed the super-G course, giving skiers the ability to count the gates, the rhythm changes and inspect the hills. Hudec downloaded the video onto his iPhone, replayed it about 10 to 15 times while lying in bed. Every minor detail was burned in his memory as he fell asleep.

“Preparation and training is everything. Once you’re standing in that start gate, you’re not going to learn how to ski.”

Sunny skies and a smile

Hudec awoke to sunny skies the morning of the super-G event.

No wind. No visibility issues.

Hudec skied aggressively around the first two gates, then eased off ever so slightly as he approached the first steep hill. He noticed too many skiers ahead of him going too hard with disastrous results.

“I don’t need to win the race here, I need to make it down this pitch in a smart, decent fashion. I can feel that I could let my skies run and probably make the next gates even if I went straight at them. I just completely let it go and just started pinning my skis straight down the hill, and from that point I was at that next section.

“I was literally surviving that next section, just carrying all the speed I could possibly take off the steeps [hills] and just carrying on the flats.”

Hudec was late coming into a couple of later gates yet never panicked. Entering the final hill near the bottom of the course, he made a “conservative mistake,” where his skies slid off the jump, but it was nothing to be concerned with.

The race was over.

Hudec gave himself a mental pat on the back for a performance he could only dream of while collapsed on that Calgary gym floor. There was only one thing left to do. He turned to view his time. All kinds of emotions went through his body as one minute, 18.67 seconds flashed across the scoreboard.

Hudec had tied Miller for second, with only Norway’s Kjetil Jansrud ahead of them.

“It was a big middle finger to circumstance,” explained Hudec, who admitted to skiing partially injured his entire career. “This is what the world threw out me and this is where I’m standing now. It was like a big massive middle finger.”

Quality of life vs competitive fire

With the final question still resonating, Guay turned to Hudec while flashing a smirk.

“How many knee surgeries have you had?” Guay asked Hudec.

“That makes 12 between us,” Guay, shaking his head, responded.

Serious injuries have been part of Hudec’s life for more than a decade on the World Cup circuit. His knee surgeries – six on the right one on the left – also include four complete reconstructions. He suffered a herniated disc in his back, and two bulged discs one month prior to the Sochi Olympics.

Even after a remarkable comeback where Hudec became the first Canadian to win an Olympic alpine medal in 20 years, he wasn’t done with hospitals.

Back in March, he suffered a second back injury following a crash during training in Austria, forcing him to miss the final World Cup race of the season. His back was bruised and swollen, but CBC Sports skiing analyst Kerrin Lee-Gartner saw something more.

“That was the biggest hematoma I have ever seen,” marvelled Lee-Gartner, who visited Hudec in the hospital. “It was like a watermelon underneath his skin on his spine. It looked like another bump up on his back."

Hudec, 33, does think about all the injuries he’s endured and his quality of life after skiing.

He's supporting a young son, Oakley, with another child on the way.

“If you ask my son if he wants to ski, up until recently the answer has always been ‘well, no I don’t want to be hurt like my daddy,’” Hudec said. “So he sees when I’m home that means I’m injured. When I’m home in the summer I’m sore because skiing is hard on the body. It’s almost like it’s become a reality of my life.

“But not being able to bend over to pick up your six year old or seven year old when you’re 30, 31 that could be disheartening."

Hudec’s health will be the determining factor on when he chooses to retire, although he has no visions of hanging up his skies anytime soon. In fact, he won’t rule out a return to the Olympics for the 2018 Pyeongchang Winter Games.

“The most important thing is obviously physical,” said Hudec. “If physically I believe I can ski the way I want to ski, that means I can produce the results that would keep me in the hunt."