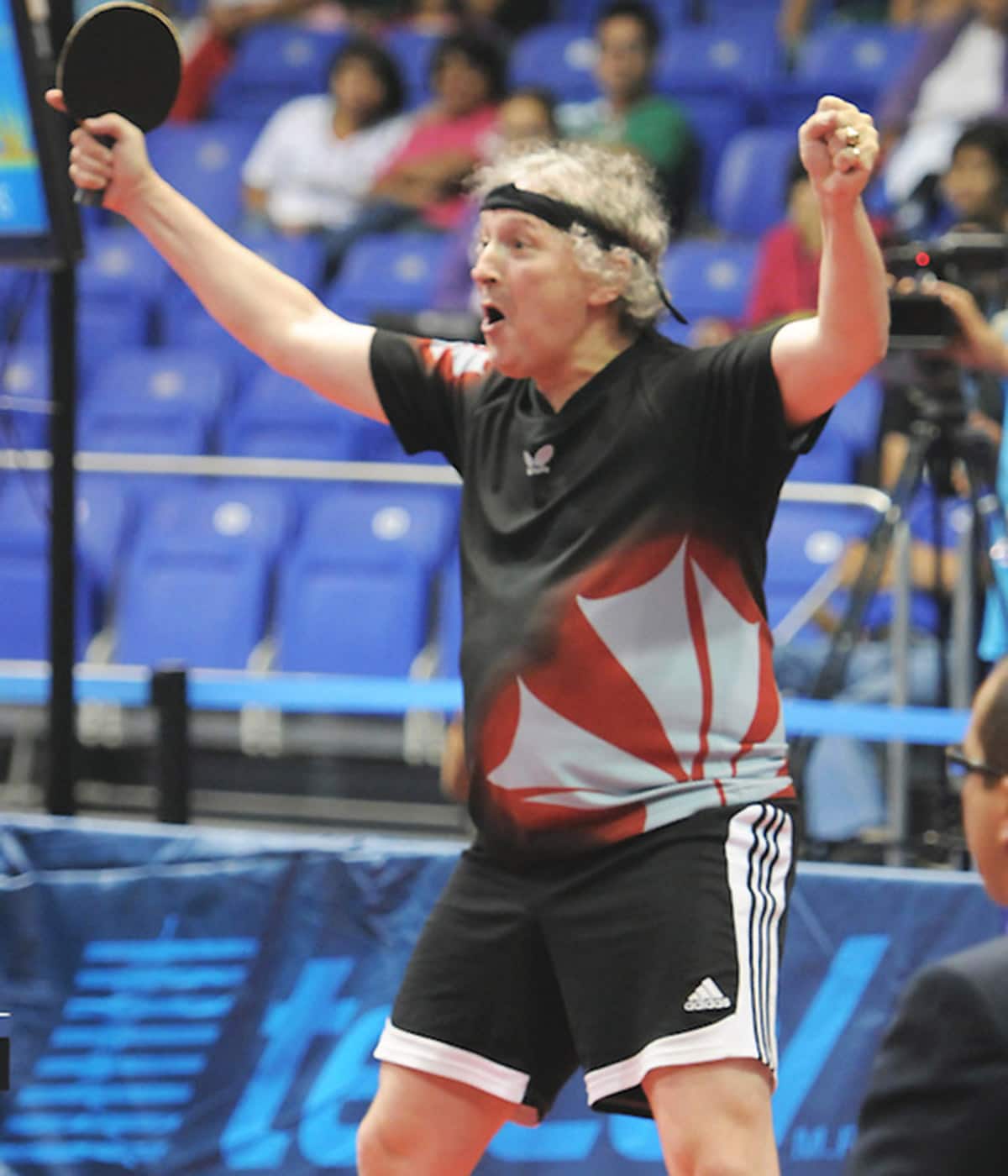 There was no Forrest Gump moment for table tennis athlete Ian Kent.

He didn’t see the 1994 film and immediately get hooked on the game because Kent and his family had a ping pong table at home long before the fictional character Forrest Gump — played by Tom Hanks — kept his eye on the ball.

Instead, the credit belongs to a man named Neville Brabrook, an all-around athlete who still competes in masters’ cycling at age 71 in Florida.

“He’s a competitive beast,” said Kent, who at age 54 will compete for Canada in table tennis at the Parapan Am Games in Toronto this summer.

“He’s still competing in cycling for veterans and he’s been in the top two or three in the United States now. He’s a big part of why I’m here even though that was, how many years ago? Forty years ago and he’s still a big part of it for sure, we talk all the time.”

Like a lot of Canadian families, the Kents had a ping pong table in their basement. Ian and his brother were pretty good and then they had the good fortune of meeting Brabrook through their father, a computer and calculator salesmen in the Halifax area.

“[Brabrook] happened to be in the top-10 players in England and he emigrated and my dad got to talking about ping pong,” Kent recalled.

“[Brabrook] contacted us, dragged us out to a club. The first day we walked in the doors and walked right back out because it was just wait, hold it, we’re not good enough for this. But he’s the one that got us started. He was my first and really only coach to give me the solid foundation.”

Kent talks about playing against competitors half his age.

A star is born

Six months later, Kent went to the Canadian table tennis championship and placed second in his age group (under-13). A star was born. By the age of 21 he was among the top eight in Canada.

Kent’s play, however, levelled off. But he wasn’t done with the game yet. So he turned to coaching and helped guide the national team from 1985 to 1991.

In the late 1980s, the national team trained at the same university where some of Canada’s top boxers were being groomed. Kent remembers going on morning runs with the likes of Lennox Lewis and taking up the boxer’s challenge for a table tennis match.

“Lennox asked me, ‘hey can I come and hit a few balls?’ I said ‘sure’ and we went and we played for three hours,” Kent recalled. “He loved it and I loved playing with him.”

Kent later taught his three sons — Isaac, Tyler and Matthew — to become excellent competitive players in their own right.

But he figured his table tennis days had concluded on Aug. 17, 1999, when he awoke confused with his body contorted and twisted. He lost 45 pounds in three weeks.

It turned out he had contracted a neurological disorder called dystonia.

The Mayo Clinic describes dystonia as a condition in which “your muscles contract involuntarily — causing uncontrollable repetitive or twisting movements of the affected body part. Your symptoms may be mild or severe, and may interfere with your performance of many day-to-day tasks.”

Kent requires a motorized scooter to get around. But his table tennis days were far from over.

He had the good fortune of meeting John MacPherson of nearby Cole Harbour, N.S., who just happened to be the coach for the disabled national tennis team.

MacPherson urged Kent to give the sport a try once again as a player.

"So I entered the para-vain of the sport about two and a half years after that because, one and a half years I was in bed while they tried to figure out what was wrong with me,” Kent said. “Now, I’m on the proper medication. Now I’m able to get around and play, moderately disabled.

“As an able-bodied player, I wasn’t quite good enough to compete internationally, but I did become national team coach of the able-bodied team.

“As a disabled athlete post-1999, my first competition was 2004, I lost every match I played. However, one year later I came in second in the Pan American Games in class 10, which is the least disabled class of table tennis.

“They didn’t know where to put me because I have a rare disorder no other table tennis player in the world has. I eventually got put into the right class, class 8, so once I was in class 8, in the German Open in 2006, I knew I could do damage, major damage, in a good way.”

What were the differences for Kent going from able-bodied competition to para?

“The competitiveness was the same,” he said. “Outside of the gym, more compassion, more friendship for each other, more respect, because everyone has different struggles and different hurdles they’ve overcome.”

After what he had been through, the victorious moment was sweet.

“I was thinking, enjoy this national anthem being played for you, you for your country,” Kent said. “It may never happen again, you don’t know. Right, it might never happen again. So, I was in the moment, I just, magically enjoyed it and realized that ‘hey, this is it.’”

Kent is part of CIBC’s Team Next mentorship program and has been learning at the side of world champion canoeist Mark de Jonge. (Table Tennis Canada)

But it’s not it. The old grey fox is back at it again four years later. He is part of CIBC’s Team Next mentorship program and has been learning at the side of world champion canoeist Mark de Jonge, who is 23 years younger than Kent. Even at Kent’s age, the program has been worthwhile.

“The level of professionalism and attention to detail was second to none [that] I’ve seen and I’ve seen a lot of it,” he said. “You know, Athletes Canada and CIBC together as partners, they’re making a tremendous influence.

“Everybody needs a mentor. My mentor happens to have just won the world championships in the K1-200 and happens to be the world record holder in that distance, and you know he spoke to me a lot about taking care of the details and I knew about that but he went into detail on the details, really small things and they all add up and make the difference between just participating and being on the podium and in his case, on top of the world, so I’m quite fortunate.”

Kent will have his sons and plenty of friends in Toronto at the Parapan Am Games. But he’s already informed them that he’ll see them before and not again until afterwards so he can maintain his focus.

Through his work with de Jonge, Kent knows the importance of making sure he’s at his best when it counts.

“For everyone, it’s different,” he said. “I make sure I wake up four hours before competing. I warm up at a certain time, I play the exact same song when I march in for every match I play; it’s The Show Must Go On by Queen. So, getting things right on the day has everything to do with doing the same things that got it right for you in the past.

“I’m in my own bubble. I’ve already talked to my family; I have three sons, 20, 22, 24, [that] all play table tennis. They’re all coming, my brothers are coming, my dad is coming, my mom would have come but she passed away [last year]. While the Games are going on I won’t see them. My focus is very, very directed. I have a job to do there.”

And that’s to hear the Canadian national anthem played one final time from the top step of the podium.

“Ah, it’s magic,” Kent said, when asked what it’s like to experience that.

“It’s a rare occasion when the national anthem plays and a tear doesn’t come down my face because I’m very proud to be able to represent Canada. Toronto is an opportunity to put my best foot forward on home soil. I’m so looking forward to it.”