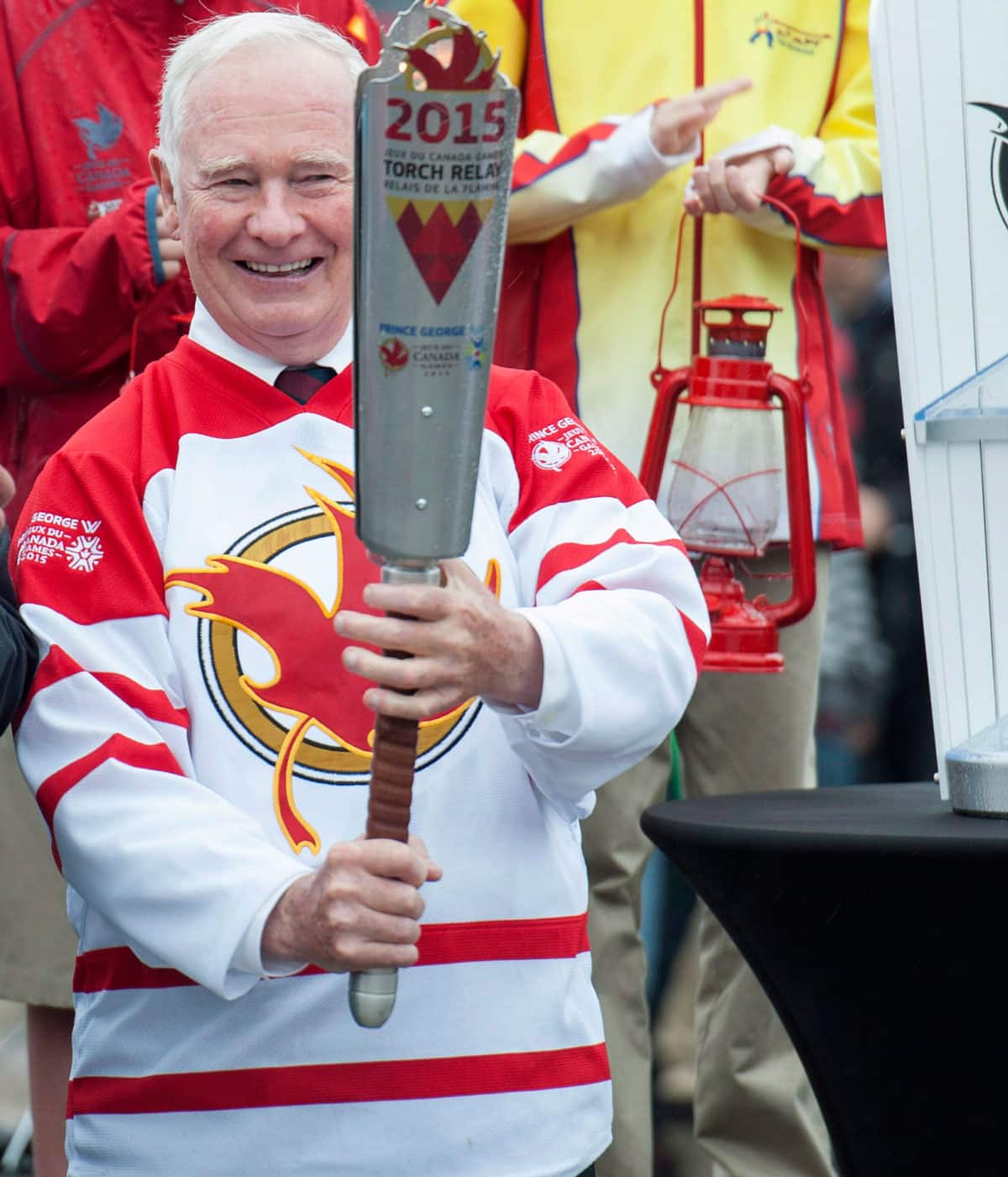 Why did Governor General David Johnston pass up a tryout with the Boston Bruins?

David Johnston was captain of the Harvard hockey team before he became a successful lawyer.

One of Canada’s most eminent hockey nuts, otherwise known as his Excellency the Right Honourable David Johnston, Governor General of Canada, missed out on the Sochi experience.

He wanted to be there to cheer on the gold-medal victors of both the Canadian women and men teams. But when you’re the Governor General, your agenda is often full with other duties.

When Marie-Philip Poulin and the Canadian women stormed back to the beat the United States 3-2 in overtime in the championship game, the Governor General was delivering a luncheon speech to the Canadian Media Production Association's Prime Time conference in Ottawa.

Johnston made the best of the situation. He allowed others in the room to shout out updates. When Poulin potted the golden goal in OT, the Governor General led the audience in a spontaneous singing of the national anthem.

“I was geared up to give the most boring speech, it was the last speech of the conference,” the Governor General said. “It got to be quite lively.”

A few days later, Mr. Johnston was in India with his wife Sharon for a state visit. He was at a reception on a hot evening in New Delhi, when Canada beat Sweden in the men’s final. Again, the Canadians in attendance celebrated with a rendition of the national anthem.

“I could think of a dozen of these sort of moments,” said Johnston, who presented the Ontario players with their gold medals last month after they beat Alberta 3-1 in the final at the Canada Winter Games in Prince George, B.C.

While on a state visit to India, Gov. Gen. David Johnston watches the 2014 Olympic gold medal hockey game in the backyard of Canada's High Commission.

In early 2015, the Governor General returned to his alma mater at Harvard to watch the annual Harvard-Yale game that honoured one of Johnston’s former Harvard teammates, the late Tim Taylor, who spent more than three decades as Yale’s hockey coach.

Also in the stands that night was former Yale student John Kerry, another passionate hockey man, who is now the United States Secretary of State.

A few years ago, when Johnston was the University of Waterloo president, he was invited to play in student-faculty game to commemorate the 50th anniversary of the school. He was officially a senior citizen, but his age didn’t deter him from scoring the game winner to lead his team past former Canadian Olympian Geraldine Heaney, who was the coach of Waterloo’s women’s team at the time.

Brian Bourque, the current head coach of the Waterloo Warriors men’s team, set up Mr. Johnston for the winner.

Johnston’s passion for hockey comes honestly. He played the game at an elite level. Who knows, he may have enjoyed a pro career if his 150-pound frame was bigger back in his prime playing days
He continues to enjoy the occasional skate on the Rideau Canal and he enjoys a random game of shinny outside his residence, Rideau Hall. “It’s the oldest outdoor rink in Canada,” Johnston said.

The 73-year-old Governor General of Canada was born in Sudbury, Ont., and moved to Sault Ste. Marie at age six. His father worked in a hardware store. Money was tight in his family. But that didn’t deter Johnston from flourishing with hand-me-down equipment.

He fondly recalled the first time he put on a pair of brand new skates. It was a gift from a local sporting goods store owner. A scout from the Toronto Maple Leafs was in town to watch a game at the Sault Memorial Gardens. In his new skates, Johnston managed to score a hat trick.

He went on to win the Northern Ontario under-17 championship. His juvenile team fell behind three games to nothing in Timmins, but when he and his teammates Phil and Tony Esposito as well as Lou Nanne returned home, they reeled off four wins in a row to take the title.

Tony Esposito was the backup goalie on that team, but he was only 14 years old. Teammates Jim Sanko and Benny Greco went onto minor pro careers, and of course, the Espositos and Nanne were standout NHLers.

“Phil clearly had NHL potential back then,” Johnston said. “But he was so tall and thin. He didn’t physically mature until later and he was a mean player in the best sense. Lou worked so hard on the game.”

For a passionate hockey teenager, Sault Ste. Marie was a wonderful place to be in the 1950s. Johnston played mainly on outdoor rinks around town. It was a treat to play in the Sault Memorial Gardens, where he would watch his idols Joe Bumbacco and Don Rope play for the local Greyhounds.

The family spent their weekends skiing at Mont Tremblant, Que. It wasn’t until later that the eldest Debbie started to skate at age 15 at College de Brébeuf in Montreal.

“She said, ‘Dad why didn’t you introduce us to the game?’ I said because you were so busy skiing,” Mr. Johnston recalled.

Sharon Jr., just like Dad, went on to captain Harvard and later skated for Cambridge University in England.

So how did a talented, but little known smallish defenceman from Sault Ste. Marie end up at Harvard in the early 1960s?

Back in the late 1950s, Harvard dean of admissions Bill Bender theorized that the Ivy-league school needed to start to admit strong academic students from middle and lower class families, not just wealthy New England private school students. Bender felt it was important to provide the school with a broader base of students.

Through a Harvard grad who was working in Sault Ste. Marie at the time, Johnston earned a scholarship to the renowned school.
He won Ivy-league titles in each of his final three seasons and as captain in his senior year he set up Gene Kinasewich for the championship-clinching goal.

Johnston didn’t score a goal in his final season at Harvard, but he set a then school record for defencemen with 25 assists to earn team MVP honours (the John Tudor Memorial Cup) and his second all-American honours.

Four years ago, Johnston was named to the top-50 all-time list of players in the ECAC, Harvard’s conference.

“I was very humbled when you see the other players on that list,” he said. “It brought back so many fond memories from that team and how much I enjoyed playing hockey at Harvard and how much it gave to me and how much it advanced my game.”

Could Johnston have played in the NHL? His coach at Harvard, Cooney Weiland, thought so. The late Weiland is a Hockey Hall of Famer who won a Memorial Cup with the 1923-24 Owen Sound Greys and later the 1929-30 NHL scoring championship while with the Boston Bruins.

The Harvard coach arranged for Johnston to attend a Bruins tryout camp in August. But the defenceman decided it was best for him to take a scholarship to Cambridge University and begin his pursuit of a law degree. Johnston went on to play for Cambridge and moonlighted in the British professional league.

“I weighed 150 pounds and I had just spent two weeks in the hospital with mononucleosis,” Johnston said. “I had a scholarship offer from Cambridge. We concluded that I would have to put on a lot of muscle to play at that level and that if I was lucky I would gain a spot on the Bruins farm team, the Providence Reds. “We concluded it was time to get on with my law career.”

It was at Harvard Johnston met a teacher and writer, Erich Segal. They lived across the hall from each other and jogged along the St. Charles River most mornings together.

Segal would go on to write a novel that was turned into a 1970 movie named Love Story, nominated for seven Academy Awards. In the novel one of the main characters, Oliver Barrett IV, was a player on the Harvard hockey team. Segal named the captain of the Harvard team in the book, Davey Johnston, after his friend.

Hockey as it turns out all these years later, continues to be one of the old captain’s true loves.