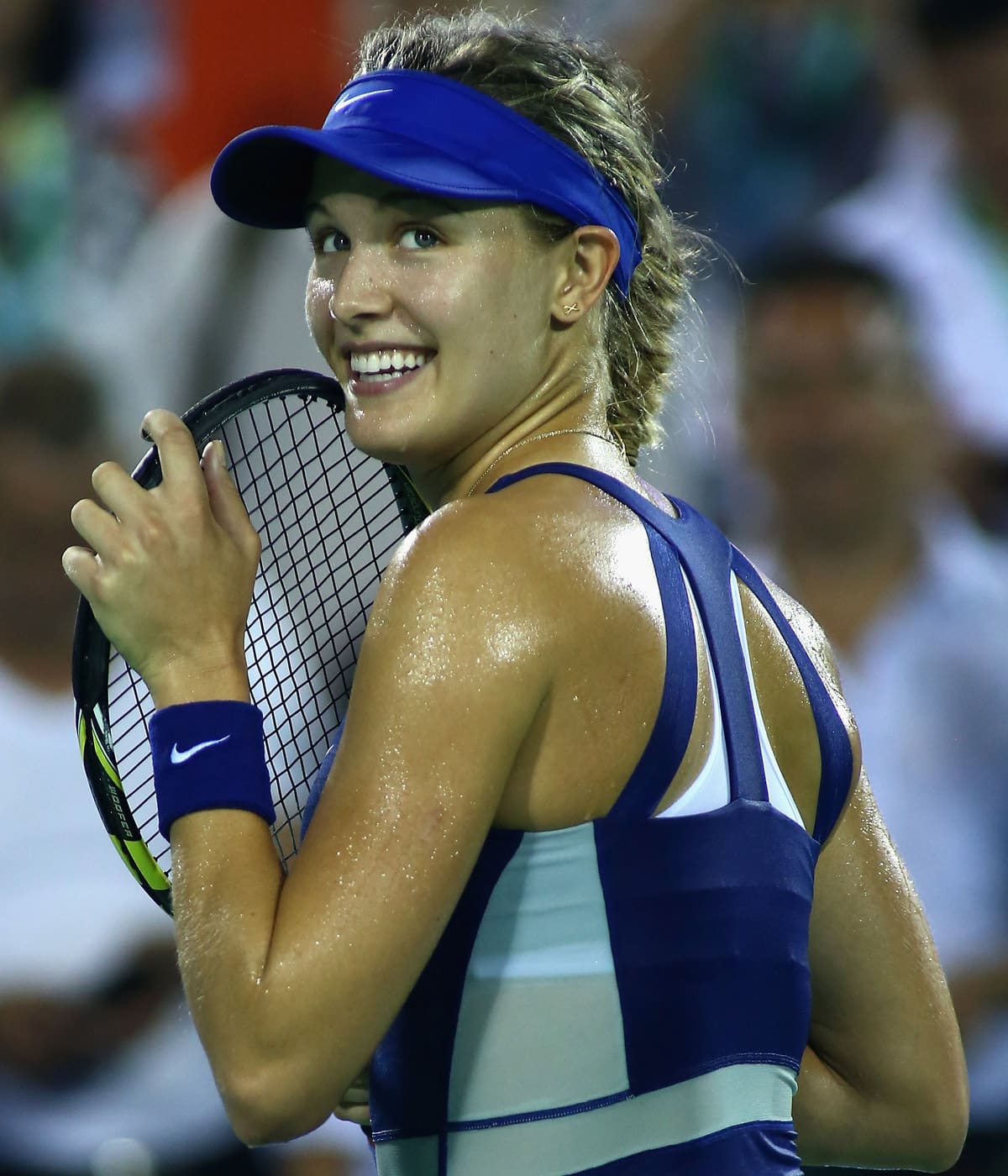 She's got brawn, beauty and the talent to be tennis' next big thing

Eugenie Bouchard is never satisfied with her game, and that more than anything may be why the young tennis star is considered by some to be the next in line for Maria Sharapova’s crown as the sport’s biggest crossover star.

The 20-year-old Westmount, Que., native is such a complete package she’s just been picked up by WME-IMG management with the idea of making her everything she can be.

There is a lot to work with – talent on the court, model looks, fully bilingual in French and English, comfortable in front of the camera, a social media whiz.

But before Bouchard becomes world famous in both sports and pop culture, we should take a moment to look back on a startling season, one that has earned her the nod as the CBCSports.ca Canadian Athlete of the Year.

You can’t say people weren’t prepared for something special to happen in 2014 with a young player who began 2013 at 144th and moved up to 32nd, along the way winning the Women’s Tennis Association Newcomer of the Year nod.

Here’s a piece by The National’s Peter Armstrong from last February that spoke to that:

Bouchard's run to the Aussie Open semis was just the start of a breakthrough year.

From that point, this happened:

• Bouchard went to the semifinals in the Australian Open, first of the Grand Slam tournaments, beating former No. 1 Ana Ivanovic in the quarters on the baking court of Melbourne Park. She lost to world No. 2 Li Na, the eventual champion, 6-2, 6-4 in the semis.

• Four months later at Roland Garros, in Paris, the Canadian again went to the semifinals after beating 14th seed Carla Suarez Navarro in three hard sets. One step from the final, Bouchard lost to Sharapova, the eventual champ, 4-6, 7-5, 6-2.

• On to London and Wimbledon, where Bouchard made Canadian sports history by becoming the first representing this country to make a Grand Slam final in singles. She went undefeated to that point (12-0 in sets) and beat No. 3 seed Simona Halep 7-6 (7-5), 6-2 in the semis. Petra Kvitova won the final 6-3, 6-0 in front of Britain’s Princess Eugenie, for whom Bouchard is named.

• Finally, the U.S. Open found her winning two late-night, three-set victories before Bouchard lost in the fourth round to Ekaterina Makarova, a match that included a 10-minute medical break as the Canadian suffered from the brutal New York heat.

Bouchard didn't get the Wimbledon trophy she wanted in her first Grand Slam final appearance, but she vowed to learn from the experience. (Clive Brunskill/Getty Images)

You have to go back 30 years to find another woman from this country who made this kind of impression in tennis in a short period of time – Carling Bassett, who went to the quarters in Australia, in 1983, and the quarters in Paris and semis at the U.S. Open in 1984. Bassett rose to No. 8 in the world by 1985, but dropped away.

It also has to be noted, for non-tennis followers, that the first three majors are on different surfaces – hard, clay and grass. In these days of surface specialists, that’s impressive.

Rather than celebrate all this achievement, however, Bouchard continued to express disappointment at not doing better.

“I’m proud of how I’ve improved as a player throughout the tournament. But I’m never satisfied with losing,” she said in Melbourne. "I always want to go further and do better. I wouldn't say I exceeded my expectations, but I'm happy with how I did."

Parse that, and you can see a young woman who not only wants more, but expects “more” to be winning a major. And then another one. And another.

Up to the five of Sharapova. And then more, still.

“That just gives me extra motivation to work hard in practice and get ready for the next one and have that belief that I can do it."

“It was a big moment walking out on centre court for a final. I have experience now. I know what it feels like. I hope I can walk out to many more finals, that’s the goal.”

So calm on the court is the right-hander (two-handed backhand) she’s picked up the nickname The Ice Queen. Hardly creative, but accurate.

Not that there weren’t some tough times along the way, as Bouchard left a deeply disappointed hometown crowd at the 2014 Rogers Cup in Montreal by going out in the first round.

And she started to show signs of injury, tiredness and, some said, distraction as the season moved into its later stages.

However, in September, at Wuhan, China, Bouchard made the finals of a tournament that featured most of the world’s top players.

There is no doubt Bouchard is set up to be a modern sports star – she is an enthusiastic user of social media who feeds her 375,000 Twitter followers with regular information, updates and selfies.

How many tennis players can claim a Hollywood TV star like Jim Parsons, of The Big Bang Theory, as a member of her fan club? The three-time Emmy winner is a serious tennis follower and refers to Bouchard as “a cold-hearted killer” on the court.

This is an athlete who loves the limelight, loves the attention, loves the centre ring in the media circus, but seems to keep it separate from the game itself.

Tennis Bouchard is a tactical player, aggressive, cuts off angles, changing shots, coming up with fresh ideas, seemingly on the fly.

Media Genie glows from the cover of the New York Times Magazine, Chic and Elle. Simon Briggs, tennis writer for Britain’s Telegraph newspaper, referred to her as being “as popular with picture editors as a baby panda.”

If so, it’s one that bites.

Someone asked Tennis Bouchard this season if she had a best friend on tour. The answer was both compelling and revealing.

“Best friend on tour? I don’t have one. I don’t think the tennis tour is the place to have friends.

“For me, it’s all competition. And I think it’s important to just remember that we’re going to play against each other. It’s not like we’re teammates.”

With a new coach (unannounced – long-timer Nick Saviano is now gone) and new management, who knows what 2015 will bring, starting in January at Melbourne?

For now, Eugenie Bouchard is the top. And anything goes.