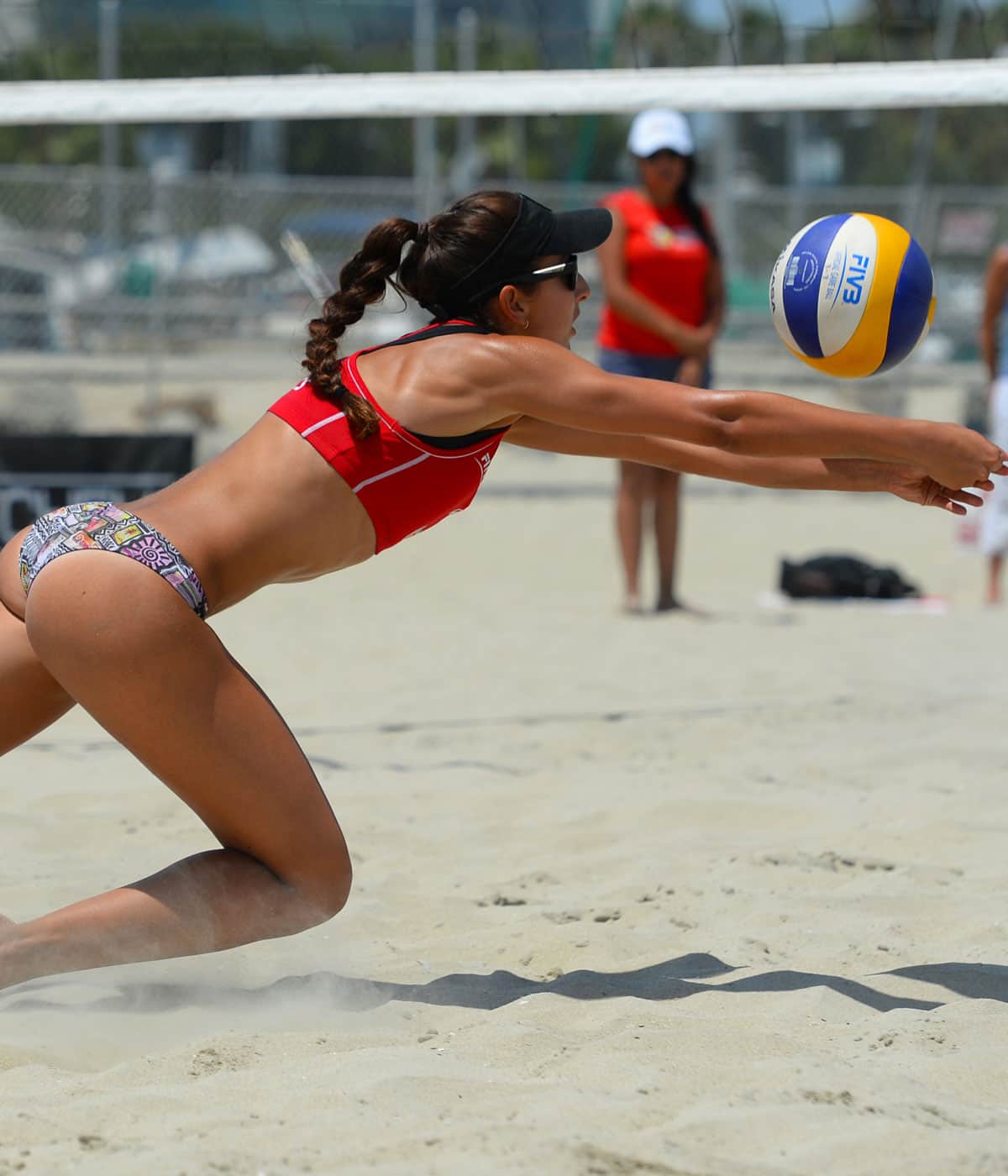 The duo of Melissa Humana-Paredes and Taylor Pischke will be fun to watch at the Pan Am Games. (Courtesy FIVB)

When Melissa Humana-Paredes lets her hair down, she tends to bounce around like an old 1980s Tiffany video, all smiles and cuteness and great stories and a breakfast of Lucky Charms and Greek yogurt.

On the court, beach volleyball’s global rookie of the year changes to hair-up concentration, laser focus and still-evolving world-class skill.

It takes a true pair to create this ballet with sand in your toes. Humana-Paredes’ has the ideal partner in Winnipeg’s Taylor Pischke, who is as driven and professional on the beach, though more reserved off of it. The two of them are hoping to make it to the Pan Am Games and then on to the Rio Olympics.

Rather than storm the volleyball world in 2014, the Mel and Taylor show snuck in through the side door and improved at such a clip they moved from nowhere (in the 60s) to No. 23, and took over as the top Canadian duo, before it was over.

“It’s not a surprise [for us], but no one was expecting that,” said Humana-Paredes, snacking on some yogurt after the team’s hard two-hour February workout at a converted aircraft hangar in Toronto. “No-one was expecting Taylor and me to be in the running for Pan Ams, not the Olympics, not being ranked first in Canada.

“We just sprang out. So now we’re here and dealing with pressures, but … it’s outside pressure more than anything. Within our team we know what we’re capable of.”

Canada’s top three duos couldn’t be closer in the FIVB world rankings, with Humana-Paredes and Pischke in at 23, Sarah Pavan and Heather Bansley at 24, Jamie Broder and Kristina Valjas at 25.

Most of the top global teams come from the Americas, with the top four representing Brazil, Argentina, Brazil and the United States, respectively. It’s busy up there.

More importantly, only 24 teams will make the beach at Rio and the complicated qualification system basically means you have to be inside that number based on points from your top-12 Grand Slam and FIVB Open events. And there are top-flight teams who took a year or two off from the circuit after London that are expected to return for a run at 2016.

This country could have two duos at Rio, or none.

What makes Pischke, 21, and Humana-Paredes, 22, different is simply the clock that counts down on every athlete’s career. They are young. The other two sides are veterans who may have Rio as their final Olympics.

York University did a "Get to know" video on Melissa Humana-Paredes.

How fast have Humana-Paredes and Pischke shot up the world rankings in 2014?

• In four Continental Tour events (next level down from world events) last year, made all four finals and won two
• Took bronze in world under-23 championships for second year in a row
• Finished ninth at first FIVB Open tournament in Mexico
• Entering four top-level Grand Slam events, the Canadian pair were 17th, 25th, ninth, and fifth
• Overall, Pischke and Humana-Paredes earned $21,500, most going back into the cost of training.

Canada’s two entries for Toronto will be decided based on points from the five Grand Slam and Open tournaments that run in April and May.

It all began with a simple conversation three years ago between two long-time volleyball players and coaches, one from Toronto and the other out of Winnipeg.

Hernan Humana, the former Chilean national team member who had famously coached John Child and Mark Heese to Canada’s only Olympic medal – a bronze in 1996 – was chatting with Manitoba’s Garth Pischke, a two-time Olympian for indoor volleyball.

Why not, they postulated, ask our daughters if they’d like to get together as a beach pair?

Good idea. The daughters agreed, had one day to prepare for the world under-21 tryouts, made that and went to the event where they were fifth. This will be their fourth summer together.

Sons and daughters of elite athletes seem to have a built-in advantage because they grow up around the games of their parents, and have access to strong coaching and guidance from the earliest of ages.

“I think it’s something very special [that] we have,” said Pischke, who has a Canadian University (CIS) indoor title with the University of Manitoba Bisons under her belt. “We both come from volleyball families – mom was on the junior national team and dad an Olympian.

“We were exposed to the sport at a young age, the expertise they have, it’s a huge advantage, for sure.”

There’s a sensory thing going on, easily laid bare to spectators, with Humana-Paredes and Pischke. An unspoken communication, as though they had grown up as fraternal twins.

“That’s something about Mel and I we’ve had right from the beginning,” said Pischke. “You can’t learn it, or teach it and not all teams have it.

“It’s different when I go and play with a different partner in practice … not quite the same … [with Mel] we have an unspoken bond, I know where she’s going to be at all times.”

Family background has also given the pair the ability to handle the strain of being a world-class athlete – the travelling, staying focused at competitions, mind games played between opponents, expectations at home and abroad.

“I was around it from a young age,” said Pischke. “My dad coached, I saw how he dealt with it, and that’s good, because the pressure will keep building [on us].”

Pischke is a model for transferable skills.


You can’t learn it, or teach it and not all teams have it

While the rest of the family was living and breathing volleyball out in Winnipeg, she fell in love with rhythmic gymnastics, combining artistry with the ability to handle clubs, ribbon, and ball. She was never forced onto the court by her parents, or expected to follow a specific path in a predetermined way.

Pischke became pretty good at gymnastics, and mastering the toughest rhythmic skills, such as tossing the ball high in the air and having it land in the exact spot, over and over, has become a major help.

“Every since I was little, tossing for serving, I’ve always had a better skill set, it’s a definite advantage,” said Pischke, who left rhythmics at 14. “My overall body awareness [is strong], knowing where the body is, control over every part of the body.”

Humana-Paredes, the defender on the court, freely shares credit for her top rookie status – an award voted on by players, coaches and officials around world – with her partner.

Pischke, the blocker, is equally as effusive in praise for her other half.

Together they do something indoor players don’t and all beachers do. They both attack. And that means the skill sets have to be complete.

“You have to be an all-arounder,” Pischke says. “Be able to play every position, have to be able to change sides on attack.”

They are a team, coach by Olympian John Child. And a machine. With a goal of seeing Brazil in the summer of 2016, carrying memories of Toronto with them.