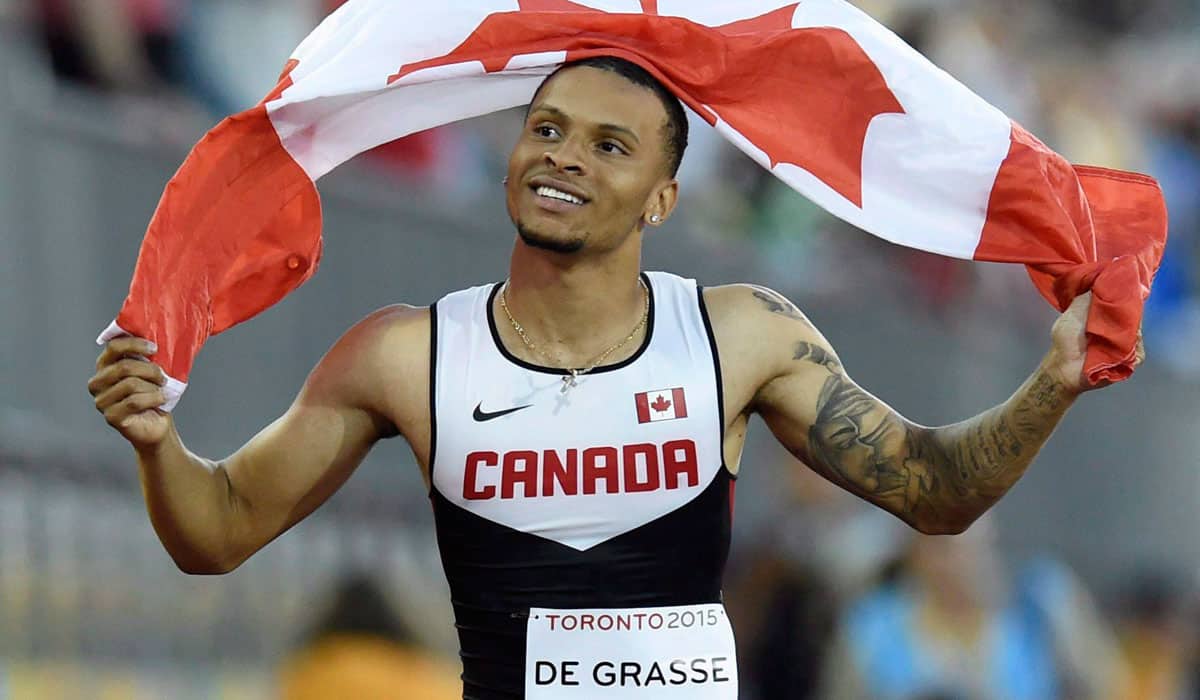 Sprint sensation goes from zero to national hero in 7 months

It's Jan. 17, 2015, and Andre De Grasse steps into the blocks for the 60 metres at Dempsey Indoor Facility in Seattle, as close to an unknown across Canada as a member of the national track team can be.

The young Markham, Ont., native is running for the University of Southern California at an annual preview event where NCAA Division I athletes and a handful of high school phenoms converge to work out the winter-break kinks and get a first taste of the season to come.

The gun goes off, De Grasse drives out low into his acceleration phase …

… and flash forward to Aug. 24 at Beijing’s 91,000-seat Bird’s Nest Stadium, where De Grasse dips at the line to grab a bronze medal in the 100 metres at the IAAF world championships, finishing behind only the two biggest stars in the sport — Usain Bolt and Justin Gatlin.

Zero to national hero in about seven months.

And now, for his stunning rise in Olympic sports' signature event, our choice for the 2015 CBCSports.ca Canadian athlete of the year.

Running in a star-studded 100m final, Andre De Grasse stunned the track world with a bronze in Beijing.

Could he have seen this breakout year coming back in January?

“Not really,” De Grasse told CBC Sports this week. “I didn’t have the indoor season I wanted [battling nagging hip pain]. The first outdoor meet was against some top competition at the Florida Relays.

“When I ran fast there and I started feeling healthy again and my confidence started to come back.”

The Summer of Andre included sprint titles at the NCAA championships, the Canadian nationals and, pictured here, the Pan Am Games in Toronto. (Frank Gunn/Canadian Press)

De Grasse, who turned just 21 on Nov. 10, put together an impressive list of accomplishments, even when he wasn’t feeling that great and his confidence was apparently low:

• He finished second in the 200m at the NCAA indoor championships in March (after false starting in the 60m), serving notice to the college world that a new challenger had arrived.

• After winning both sprints at the Pac-12 Conference championships, De Grasse took the double at the NCAA outdoor title meet in June with a wind-aided 9.75 and wind-aided 19.58.

• At early July’s national championships, he tore up the track in Edmonton to win the 100m in 9.95 seconds, the first sub-10 on Canadian soil since Maurice Greene of the U.S. did it in 2001.

Oh, and somewhere in the middle of all this, track announcers stopped pronouncing his last name as though it came from a famous, fictional TV high school.

Treating this as a mere list, however, does not tell the story of how slowly — and then so suddenly — De Grasse came to the attention of his homeland.

A search finds no mention of the sprinter’s exploits in Canada outside of athletics websites until the sprint double at the Pac-12 meet in May, when the national wire service mentioned the effort in a wrap-up piece.

That put the media antennae up in the air, so that the runner’s superb outing at the NCAA finals was splashed all over platforms from TV to print to digital and social media.

De Grasse won a thrilling 200m final to complete a sweep of the individual sprint events at the Pan Am Games in Toronto.

Canada discovered his journey, one now so familiar to fans:

• How he was a basketball player at Millikin Mills High School in Markham, just north of Toronto, when they cancelled the program and De Grasse tried track just for the fun of it in Grade 11.

• How he lined up for his first race against a high-quality scholastic field, wearing basketball shorts and flat shoes, without starting blocks, and put down a 10.9-second 100 metres, catching the eye of former Olympian Tony Sharpe.

• How he earned a scholarship to Coffeyville College, in Kansas, home to one of the top Juco programs in the States, there winning three national titles in two years.

• How he made the 2014 Commonwealth Games team with just three years track experience, going out in the semifinals of the 200 metres.

• And how he was picked up by the USC Trojans and came under the tutelage of coach Caryl Smith-Gilbert, leadership he still has.

The tale is now something of a sports legend, but it doesn’t say anything about the way the rest of the track world thinks of De Grasse and his talent.

When De Grasse headed for the world championships in China, he was considered a contender to perhaps make the final. He did much better than that.

De Grasse went on to earn another bronze as part of the Canadian men's 4x100m relay team.

Bolt, who won gold in both events as well as the 200 to bring his career world-title haul to 11, was impressed enough by the Canadian newcomer to interrupt a trackside interview with De Grasse after the 100 to give his props.

“Did you even know who this guy was when the season started?” the Jamaican star was asked.

“That feels good. To be respected by Usain Bolt, the king, the greatest of all time in the world, I’m so happy right now,” De Grasse said, beaming that megawatt smile of his to the world.

The king of sprinting paid respect to De Grasse after the men's 100m final in Beijing.

There’s an aw-shucks touch to De Grasse’s personality when he’s being interviewed that belies the fire burning inside. So many of his quotes read like somebody who can’t get his mind around how quickly things have gone.

“Honestly, I don’t even know where I was in the race,” he told NCAA.com after winning the 100m at the U.S. college championships. “I just kept doing what my coach told me to do and I just leaned, and I saw the time and I was just … wow.”

Two days later, after the 200m victory: “I was like, wow … this is unbelievable. Didn’t expect to run that fast.”

After his double at the Pan Ams: “Oh, wow … it’s amazing. It feels so unreal right now. I can’t believe I did that.”

Anson Henry, now a CBC Sports reporter, is a two-time Olympian and the last Canadian before this year to make the semis at the worlds in the 100m (2007 at Osaka, Japan). In a TV interview during the Pan Am Games, he posited an advantage for De Grasse is his lack of experience.

“[It’s] the bliss of ignorance. I don’t think he really understands what the pressure is, or who some of these sprinters are that he’s beating … the magnitude of what he’s doing,” said Henry. “He’s just running. He’s just running fast.”

His remarkable season over, De Grasse (known for being a library rat at school) had one more decision to make — stay at USC for his senior year and finish his degree, or go pro and make a lot of money. He took his time.

Perhaps it speaks best to whom he is that De Grasse picked both. He turned pro, landing a head-turning deal from Puma worth more than $11 million US (and up to $30 million with bonuses), and he’ll stay at USC for training and to get his degree.

And on the horizon is the Rio Olympics, where around noon local time on Aug. 13, he will step into the blocks for Round 1 of the 100 metres.

With files from Anson Henry