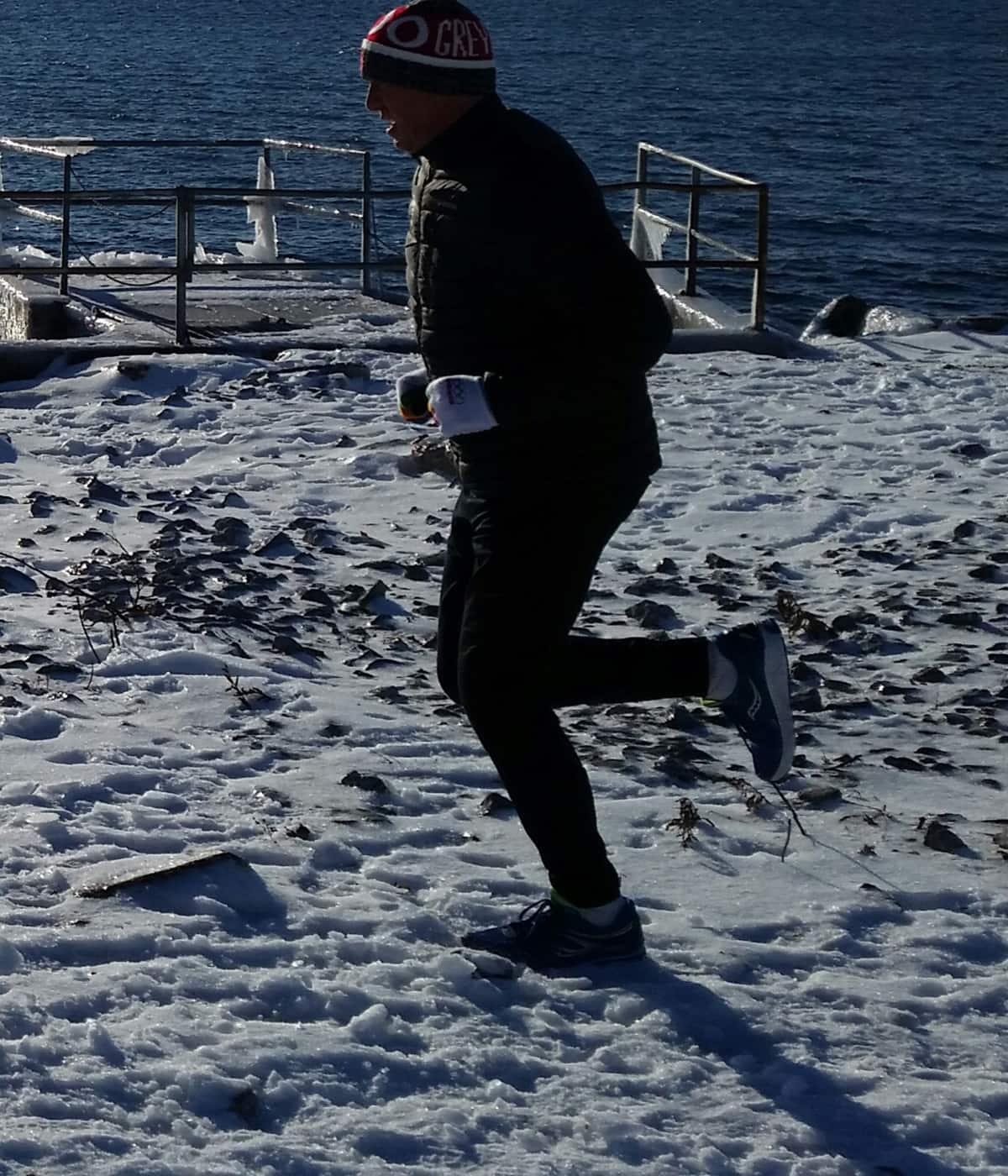 300 days of running opened a world of possibilities

'I resolved to revisit the oldest of the athletic pursuits,' says CBC Sports broadcaster Scott Russell

What started off as a resolution for Scott Russell turned into something much bigger. (Scott Russell/CBC Sports)

It started as a resolution.

Just like any other resolution one makes at New Year’s.

And so in the Olympic year of 2016 I resolved to run 300 days. It seemed like a round number, so why not?  It was as simple as that and there was no pre-meditated agenda behind it. There was no complex formula in which I would cut my caloric intake in order to lose 10 pounds and increase my lung capacity through a series of intervals or log the requisite miles while training for the next marathon race.

No, this was child’s play — a personal, little game I played with myself.

See if I could hit it.

I like running, so that was never an issue. But in recent times I had come to take it for granted and had not been vigilant about it.

Increasingly I had failed to recognize what it meant to my life — this instinctual act that I learned as a toddler. I resolved to revisit the oldest of the athletic pursuits, which is of course, is running.

This was about getting back to basics and so I gave up my gym membership which came complete with aerobic machines, the weight room, the lockers, the whirlpools, the saunas and the showers.

Instead, I went outside and hit the road.

“There is no bad weather, there are just soft runners,” said Bill Bowerman, the legendary University of Oregon track coach and co-founder of Nike Inc. “The real purpose of running isn’t to win a race, it’s to test the limits of the human heart.”

Maybe Bowerman was right…this was about challenging myself. I got off to a great start because where I live in Southern Ontario the month of January was uncannily mild. And so down by the beach or on my way to work along Queen Street I could run easily with my notes and other paraphernalia tucked safely into the small backpack I wore.

In the Haliburton Highlands, which I occasionally visit, I trotted along the majestic highways of the Canadian Shield and on the back roads cut through the forests of cottage country.

Each waterfront I passed was idyllic and the waves rolled to the shore free of the menacing ice which, thankfully, was nowhere in sight.

I ended up running the first 41 days straight of 2016 before taking a break.

I definitely got on a roll.

There was a trip to England and I ran through the streets of London as well as at the Port Meadow along the Thames River in Oxford. I even visited the Iffley Road track where Roger Bannister had broken the four-minute mile barrier back in 1954.

The managers of the facility welcomed my request to run around the oval where the most famous athletic act of the 20th century had been performed.

I was unquestionably and agonizingly slower than Bannister historically had been, but recalled the words he had written in his memoir, which I had devoured a couple of years previously.

“It is not just the desire to succeed: there is also the desire to find in sport a companionship with kindred people,” Bannister mused.

“However strenuous our work, sport brings more pleasure. It brings a freedom and challenge which cannot be found elsewhere.”

In Boston, while broadcasting the ISU world figure skating championships, I plodded by the finish line of what is arguably the globe’s most celebrated marathon which I had completed a decade ago. I remember weeping uncontrollably as I collapsed on Boylston Street once the race was over.

It was physically the toughest thing I had ever done.

On this trip to Boston I noticed that construction was still underway to repair the buildings torn apart by the bomb which took lives at the 2013 edition of the marathon. It served as a stark reminder that the simple and celebratory act of running together could become the target of a terrorist act. But it was enlightening and encouraging to understand that in the matter of a few weeks the race would be run again.

“Life is for participating, not for spectating,” Kathrine Switzer had written. She was the first woman to run as an official entry at the 1967 Boston Marathon and led the charge to have all qualified women welcomed at long last in 1972.

“All you need is the courage to believe in yourself, and to put one foot in front of the other.”

After the Boston Marathon bombing, the finish-line area became a symbol of hope.

At the Olympics in Rio de Janeiro I ran every day and sometimes through the streets of the enormous city which we were warned could be quite dangerous.

I never encountered any difficulty and instead discovered many things while being struck by the raw beauty of the place.

I even met a marathoner from the team of refugees who would be taking part at the Games. Yonas Kinde gladly paused to have his picture taken as he loped through the rough patch of scrub that was out back of the athlete’s village.

He talked about the opportunity he’d been given to compete at the Olympics. He called it a gift. I’ll never forget his magnificent smile.

Each day I logged the runs I had made by handwriting them in my old fashioned day timer. Sometimes I took “selfies” to prove that I had been out there. On a tour of the country to celebrate the achievements of the Canadian Olympians from the Rio 2016 Games, I made it a priority to run in some iconic places.

While hosting what are known as the Gold Medal Plates fundraising dinners in aid of the Canadian Olympic Foundation, I connected with the complex beauty of the country.

My runs took me down the Bow River in Calgary, to the seawall in Victoria, past the Museum for Human Rights in Winnipeg, the port in Halifax, the sparkling new hockey arena in Edmonton, and the brightly lit House of Commons in Ottawa.

On other outings I stopped complete strangers, some who were walking their dogs, and asked them to snap a photo of me on my mobile phone while I was in full flight. It was my way of validating the journey, and to be truthful, it helped with the motivation I needed in order to reach my goal.

As I neared the end I was reveling in the act of getting out there and simply moving my body. It became a very personal thing and the realization that I would soon complete the task allowed me to understand the peace that commitment to a resolution can offer.

I took everything in and began to appreciate the rudimentary nature of what I was doing. I was winning the race to be myself.

“All I do is keep on running in my own cozy, homemade void, my own nostalgic silence,” Haruki Murakami, the prolific Japanese novelist, wrote of his own running experience. “The point is whether or not I improved over yesterday. In long-distance running the only opponent you have to beat is yourself, the way you used to be.”

After finishing one resolution, Russell will no doubt begin another. (Scott Russell/CBC Sports)

On the last day, the final run of the 300 which I set out to do, I felt compelled to keep on going. My goal achieved, there was no finish line in sight as I rushed along the sand at the water’s edge.

That’s the thing about fulfilling a resolution. You learn that you can always resolve to do something else.

“You cannot propel yourself forward by patting yourself on the back,” the late Steve Prefontaine once said.

Prefontaine was the brightest star in American distance running before he was killed in a car accident on the precipice of the prime of his career in the mid 1970’s.

“Success isn’t how far you got, but the distance you travelled from where you started,” he said.

I started this resolution on a whim on the first day of 2016, the Olympic year. It was the only connection I could think of. Now 300 runs, which began and ended in Toronto, are behind me and this morning I just completed another.

The result is that I’m re-connected and enjoying my outings more than ever. They aren’t speedy or overly long but they’ve ended up teaching me a lot. Not the least of which was articulated by the amazing Emil Zatopek, who won gold medals in the 5,000 and 10,000 metres, and the marathon at the 1952 Olympics in Helsinki.

“Runners must run with dreams in their hearts,” Zatopek said. “What has passed is already finished. What I find more interesting is what is still to come.”

Maybe the greatest lesson learned from 300 days on the road is that undeniably many more lie ahead.