UFC 249 has been cancelled after ESPN and parent company Disney stopped UFC President Dana White's plan to keep fighting amid the coronavirus pandemic.

In an abrupt about-face at the behest of broadcast partner ESPN, the UFC has postponed UFC 249 and all future scheduled shows due to the global COVID-19 pandemic.

As recently as Wednesday, UFC president Dana White had insisted UFC 249 would go on as scheduled April 18.

"ESPN has been very very good to us and the powers that be there asked me to stand down and not do this event [April 18]," he added in a social media video posted by ESPN MMA.

ESPN and the UFC are in the midst of a five-year, $1.5-billion US deal signed in 2018. Disney is ESPN's parent company.

"While the organization was fully prepared to proceed with UFC 249, ESPN has requested the postponement of the event and subsequent bouts until further notice in light of the COVID-19 pandemic," the UFC said in a statement. "UFC looks forward to resuming the full live events schedule as soon as possible."

Thursday's turnaround came the same day that California Sen. Dianne Feinstein urged the mixed martial arts organization not to go ahead with the high-profile show reportedly scheduled on tribal land near Fresno.

The UFC has been forced to cancel several events recently because of bans on pubic gatherings due to COVID-19. Its last show was a televised card March 14 in Brazil without spectators.

But White had held firm about staging UFC 249, which was originally to feature a high-profile matchup between lightweight champion Khabib Nurmagomedov and No. 1 contender Tony Ferguson.

WATCH | Can these unusual ideas save sports? 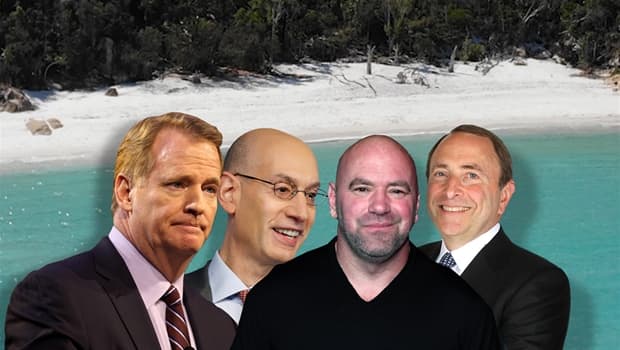 Can sports really come back with these wacky ideas?

8 months agoVideo
2:31
Ever since Donald Trump talked to a handful of sports commissioners, plans seem to be leaking about possible return scenarios. Rob Pizzo looks at a few.  2:31

He repeated that Wednesday in an ESPN interview while acknowledging that staging UFC 249 has been "the hardest thing I've ever done without a doubt ... but it's going to happen April 18."

The UFC, which had been one of the last sporting organizations yet to go into lockdown, had not confirmed that UFC 249 would take place at California's Tachi Palace Casino Resort. White was coy on the topic Wednesday when quizzed by ESPN, saying "ESPN is where it is, that's all you need to know."

But he admitted Thursday that UFC 249 would have taken place at Tachi Palace, adding that the fighters slated to compete — including Canadian Sarah Moras — would still get paid. And he promised the UFC will be the first sport back.

The April 18 card was originally scheduled for Brooklyn, N.Y.

Moras, a bantamweight from Kelowna, B.C., who now fights out of Las Vegas, said via social media that she had just completed her last sparring session when she got to her phone and found out the show was off. She had trained for the fight in her living room and garage because of restrictions on gatherings.

In confirming the show was going ahead Monday, White tweeted it would take place "somewhere on EARTH!!!!" The UFC said there will be no spectators on hand fight night and White added that everyone on the card wanted to fight.

Feinstein said she is concerned by reports that the pay-per-view event is being held in California "in defiance of the state's shelter-in-place order."

"This event would involve dozens of individuals flying to California and driving to a casino for a purpose no one can honestly claim is essential," she said in a statement.

While acknowledging the event is outside state law because it is on tribal land, Feinstein said the show should not go on.

"At best this event ties up medical resources and sends a message that shelter-in-place orders can be flouted. At worst, participants and support staff could carry the virus back to their home communities and increase its spread.

"I call on Ultimate Fighting Championship and the Tachi-Yokut Tribe to reconsider this event and delay it until a later date. We have to be responsible and mindful of all local, state and federal public health guidelines. Going ahead with this event is not the right move."

Justin Gaethje, ranked fourth among 155-pound contenders, stepped in for Nurmagomedov due to travel restrictions keeping the champion in his native Russia. Nurmagomedov had been training in California but returned home when the UFC had tentative plans to stage the event in the United Arab Emirates.

Nurmagomedov and Ferguson have been officially booked to fight five times since December 2015 with a variety of injuries prompting delays.

The UFC was been forced to postpone cards originally slated for March 21 in London, March 28 in Columbus, Ohio, and April 11 in Portland. The UFC initially planned to shift them to the UFC Apex facility in Las Vegas behind closed doors due to local authorities' restrictions on crowds.

But it was forced to look elsewhere after restrictions tightened.

White previously told TMZ he is looking to stage shows on a private island, flying in the fighters and support staff on private planes. He told ESPN this week he hopes to nail that down soon, saying he will run out of talent if he can only use American fighters.

"Fight island is real," he told ESPN on Thursday.

The Association of Ringside Physicians has also called for all combat sporting events to be postponed until further notice.

"Any combat sport taking place during this global pandemic places the athletes, officials, and anyone else involved in the event under unnecessary risk of infection and transmission of COVID-19," it said in a statement from its board.

"In addition, combat sports athletes often require medical attention after a bout, and we do not wish to see any additional strain on an already overwhelmed medical system."