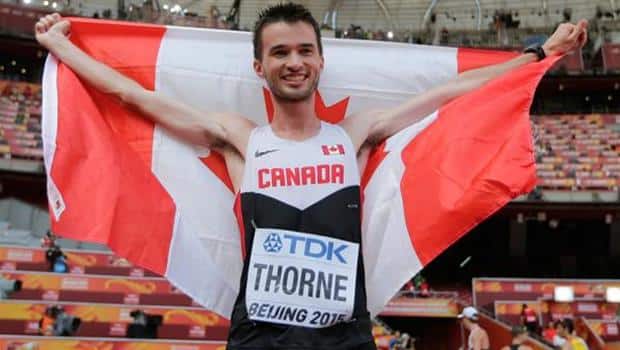 A month after Ben Thorne was left off Canada's team at the Pan American Games, the race walker arrived in Beijing with lofty ambitions of a top-eight finish.

"And by top eight, I meant eighth," Thorne said, laughing.

But for 20 kilometres Sunday morning, Thorne hung onto the pack of leaders, until one by one, the men in front of him started falling off the pace, opening up a corridor for the 22-year-old from Kitimat, B.C.

Thorne walked through it en route to Canada's first-ever world championship race-walk medal — a bronze — and a Canadian record to go with it.

A key moment came with a couple of minutes to go when Ecuador's Andres Chocho was disqualified, leaving Thorne in third with no-one on his heels.

"I was in third, and I was like 'Wow. I have never been in this position before. I don't know what's happening.' And I walked into the stadium, and it was just amazing, 50,000 people here in the stadium, I'm completely overwhelmed right now," Thorne said.

Thorne, who was Canada's third-ranked race walker this season and so didn't qualify for the Pan Ams in Toronto, crossed in one hour 19 minutes 57 seconds to become the first Canadian to break the 80-minute barrier.

Growing up in Kitimat — which sits on B.C.'s coast, about a 15-hour drive north from Vancouver — Thorne was a decent distance runner, but knew he'd likely never reach world-class in the discipline. So he took up race walking, and won the B.C. high school championships.

He moved to Vancouver soon after where he trains with Dunfee and Gomez as part of a team coach Gerry Dragomir hopes is on its way to becoming one of the world powers in the sport.

"Our goal was total world domination," Dragomir said, straight-faced, of the team's 25-year-plan.

Dragomir wasn't surprised Thorne reached the podium in a race that, if you're at least in the top-10, anything can happen.

Still, Thorne said he packed his medal podium outfit Sunday morning "slightly ironically. Thinking 'If I get a medal...like that will happen."'

The race walk course was a one-kilometre loop that wound back and forth outside the Bird's Nest Stadium, before finishing in the stadium itself. A large and noisy crowd lined the course. The walkers were serenaded by the loud thump-thump of a dozen Chinese drummers.

"I really liked that," Thorne said. "I could get sort of a rhythm going...in my head, with the rhythm in my feet. 'Boom! Boom! Boom-boom-boom! Yeah, I feel powerful.' Drum beats. I like that."

The conditions were favourable for good racing — a relatively cool 25 degrees under a blue, smog-free sky.

On one corner of the course, while his rivals veered to the outside to grab fluid at the water table, Thorne aimed for the inside to cut off some distance.

"I'd be all wet and a breeze would blow against me and cool me off, I felt amazing," he said.

Olympic champion Jessica Ennis-Hill is closing in on another major heptathlon title, leading by 86 points with only the 800

metres to go at the world championships.

Ennis-Hill had 5,706 points after throwing 42.14 metres in the javelin, well below her best. Nadine Broersen of the Netherlands moved into second place with a mark of 53.52 in the javelin, the sixth of seven events in the two-day competition.

Canada's Brianne Theisen-Eaton, the year's top performer moved up to third with 5,612 points.