Toronto Mayor John Tory said Tuesday that there have been preliminary talks with Major League Baseball's Blue Jays and the NBA's Raptors about a return to action as restrictions from the COVID-19 pandemic begin to ease.

'Things are moving quite nicely' on decision-making regarding NBA team

Toronto Mayor John Tory said Tuesday that there have been preliminary talks with Major League Baseball's Blue Jays and the NBA's Raptors about a return to action as restrictions from the COVID-19 pandemic begin to ease.

Tory said the city is working with the Ontario provincial government on decision-making regarding the Raptors, and that "things are moving forward quite nicely." Tory did not provide details on the discussions, but the NBA is currently planning to allow teams to open practice facilities starting Friday, though government clearance would be required.

"I expect there will be some news to report on that in a way again that is going to be consistent in making sure our team and our players [will not] be put at a competitive disadvantage," Tory said. "But at the same time respecting completely the imperatives we have with regard to public health and stopping the spread of COVID-19."

The NBA was originally planning to allow facilities to open last Friday before pushing the date back by a week. It has said it may do so again if more time is needed.

Additionally, a minimum distance of 12 feet would be required as a buffer between players and staff members working with them. 6 months ago
1:29
Toronto Mayor John Tory expects an announcement soon regarding the Raptors and says the city is in talks with Blue Jays and NHL. 1:29

Most NBA teams have between 15 and 20 games left on the original regular-season schedule. The defending champion Raptors (46-18) are second in the Eastern Conference standings.

Tory said he has discussed the possibility of the Blue Jays eventually being able to play games "here or elsewhere" at some point, but added the talks were at a preliminary level.

The majority of players on the Blue Jays and Raptors are currently outside Canada and Prime Minister Justin Trudeau has said non-residents entering the country would "at a strict minimum" need to follow quarantine protocols.

A representative from the federal government could not immediately be reached for comment Tuesday. A spokesperson for Maple Leaf Sports & Entertainment — owner of the Raptors — declined comment on the possible resumption of the NBA season. 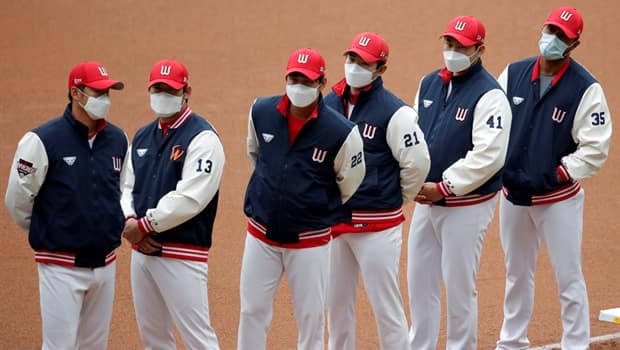 Baseball season in South Korea opens with no fans

6 months ago
2:06
The Samsung Lions hosted the NC Dinos to an empty stadium in the Korean Baseball Organization opener. 2:06

A spokesperson for the Blue Jays said the team has had preliminary discussions with municipal and provincial government officials and that there are "no concrete updates to share at this stage."

The Associated Press reported last month that baseball is exploring various options that could allow the season to start if the medical situation allows, including a plan in which the 30 teams might be split into three regional divisions.

Among the formats under consideration is one in which teams could be restricted to playing within their region.

Tory's comments come as North American sports leagues try to work out a path to return to action. The NHL is looking at plans to centralize groups of teams in low-risk centres in hopes of resuming the 2019-20 campaign this summer. Ontario Premier Doug Ford said Tuesday he has had talks with the league about Toronto serving as a hub city, and Alberta Premier Jason Kenney has said he has been in talks about Edmonton serving as a hub. Vancouver also has been mentioned as a possibility.

On Friday, Major League Soccer — which includes clubs in Toronto, Montreal and Vancouver — said it will allow players to return to outdoor team training fields for individual workouts this week. A league-wide moratorium on small group and full team training remains in place through May 15.