CBC Sports' daily newsletter looks at the recommendations for Olympic demonstrations made by Canada's athletes' commission.

Back in January, the International Olympic Committee beefed up the controversial Rule 50 of the Olympic charter, which states that "no kind of demonstration or political, religious or racial propaganda is permitted in any Olympic sites, venues or other areas." The idea was to provide "clarity," in the words of the IOC Athletes' Commission chair, on exactly how and where athletes would be allowed to speak out during the Tokyo Olympics.

The new guidelines specified that protests are not allowed "on the field of play, at the Olympic Village or during the official ceremonies" — including opening, closing, medal and "other official" ceremonies. Examples of prohibited protest behaviour were provided, including "displaying any political messaging, including signs or armbands" and "gestures of a political nature, like a hand gesture or kneeling."

The IOC also said that athletes who wish to "express their views" (the organization considers this different than "protesting") may do so during media interviews, press conferences and team meetings, and on social media and "other platforms," as long as they "comply with local legislation." Specific penalties for breaking the rules were not provided. "Disciplinary action will be taken on a case-by-case basis," was the official line.

Basically, the IOC was warning athletes to not follow in the footsteps of Colin Kaepernick or Tommie Smith and John Carlos out on the big stage. This didn't sit well with a lot of people, but the issue went on the backburner when the pandemic forced the postponement of the Tokyo Olympics until next summer.

Since then, though, a lot has changed. The brutal death of George Floyd at the knee of a police officer in Minneapolis in late May sparked a massive protest movement against police brutality and racial inequality in the United States. Most professional sports leagues endorsed their players' statements on the latter issue (the former, not so much) while also softening their rules against protests like kneeling during the national anthem. Then, in late August, the Milwaukee Bucks walked out on an NBA playoff game after police in Wisconsin shot a Black man named Jacob Blake. Other athletes followed suit, leaving some leagues no choice but to shut down for a few days.

All this has made the IOC's hardline stance against protests in the Olympic spotlight look increasingly untenable — especially when the country most likely to have protesting athletes, the United States, is the Olympics' biggest source of revenue. IOC president Thomas Bach has signalled that the rules could be softened, but that likely won't be decided until early next year.

In the meantime, the Canadian Olympic Committee Athletes' Commission, with support from the COC, put together a list of seven ideas for modifying Rule 50. They were released today. In classic Canadian fashion, they're pretty middle-of-the-road and seemingly focused on finding compromise.

The most notable suggestion is that neutral, protected spaces be carved out at the Olympics for peaceful demonstrations that don't interfere with the competition. The Canadian athletes' commission also asked for clearer guidelines on what types of protest would be considered acceptable, and what the precise punishments would be for breaking Rule 50. Commission chair Oluseyi Smith said the consensus was that protests shouldn't interfere with competition, but there was little agreement on whether they should be allowed on the medal stand or during the opening and closing ceremonies. Read more about the commission's suggestions and how some Canadian athletes feel about this complicated issue in this story by CBC Sports' Myles Dichter. 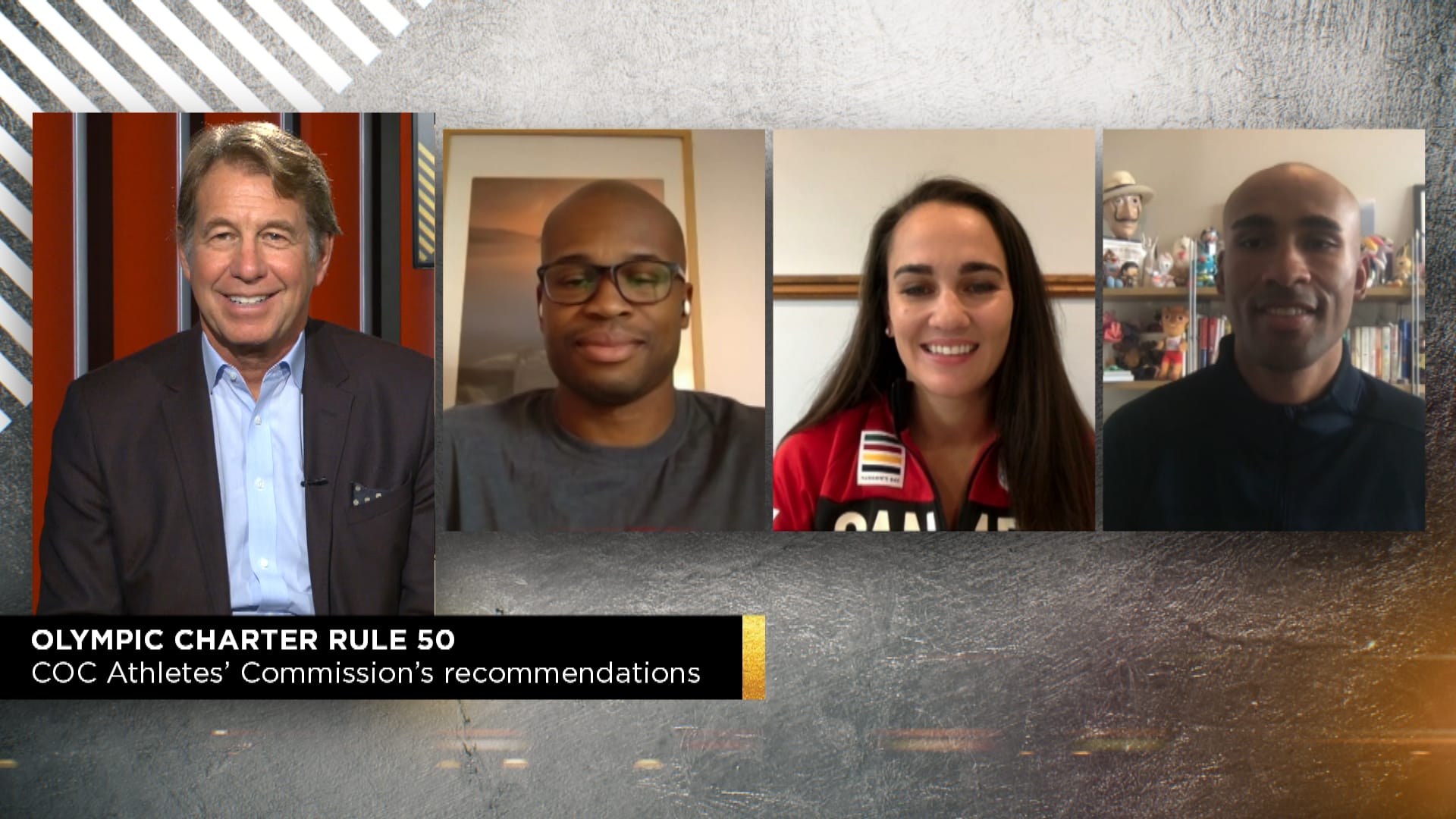 1 month ago
17:20
The COC Athletes' Commission has presented 7 recommendations in regards to Rule 50 of the Olympic Charter. 17:20

Three things you should know about from an eventful Week 2:

Chase Claypool set a Canadian record. The Pittsburgh Steelers rookie receiver's 84-yard touchdown catch yesterday was the longest TD from scrimmage by a Canadian-born player in NFL history. Claypool, who's from Abbotsford, B.C., is only two games into his NFL career, but he could be a star in the making. Pittsburgh drafted him in the second round out of Notre Dame, where he scored 13 touchdowns last season and showed off a rare blend of size and athleticism. At the scouting combine before the draft, Claypool measured in at 6-foot-4 and 238 pounds (massive for a receiver) and ran a 4.42-second 40-yard dash. The only other receiver as tall and as heavy as him to run that fast in the history of the combine is Calvin Johnson — one of the best pass-catchers of all time and a man whose body and football skills were so out-of-this-world that he was nicknamed "Megatron." Through two games, Claypool has five catches for 127 yards, and he should get plenty of opportunities to shine with aggressive quarterback Ben Roethlisberger slinging the ball around for Pittsburgh. CBC Sports' Dion Caputi, who's an expert on NFL prospects, says Claypool "has all the required physical tools to become a No. 1 receiver. His combination of height/weight/speed is what I can only refer to as 'lab-built,' as he exhibits no physical limitations."

Star players are dropping like flies. The top two picks in most fantasy football drafts suffered major injuries yesterday. Carolina running back Christian McCaffrey is out 4-6 weeks with a high ankle sprain, and Giants back Saquon Barkley is done for the year with a torn ACL. Defending NFC champion San Francisco, which was already riddled by injuries to tight end George Kittle and cornerback Richard Sherman, likely lost star pass rusher Nick Bosa for the season, while quarterback Jimmy Garoppolo and running back Raheem Mostert were also knocked out of the game with potentially serious injuries. Several other stars around the league were hurt in the first two weeks, and some people are blaming the lack of spring workouts and pre-season games.

The Cowboys pulled off the play of the year so far. Recent rule changes have made onside kicks nearly impossible to recover, so it looked like Dallas was headed for a shocking 0-2 start to the season when it lined up for the desperation play yesterday vs. Atlanta. But kicker Greg Zuerlein brilliantly set the ball spinning across the turf, freezing the Falcons and allowing the Cowboys to recover it on a play that looked equal parts football and curling. That set up Zuerlein's game-winning field goal as time expired. Check out the onside kick:

Canada now has two top-10 tennis players. Denis Shapovalov hit a career-best 10th in the men's world rankings after making the semifinals of the Italian Open, where he lost to Diego Schwarzman. Bianca Andreescu is still seventh in the women's rankings, despite having not played in nearly 11 months after suffering a knee injury. She reached No. 4 last year, which is the record for a Canadian in women's singles. Three other Canadians have been in the top 10 in the world in singles: Milos Raonic got to No. 3 in 2016, Genie Bouchard to No. 5 in 2014 and Carling Bassett-Seguso to No. 8 in 1985.

Two Canadians advanced in French Open qualifying. Steven Diez and Brayden Schnur won their opening-round matches today. Peter Polansky is up tomorrow. Three consecutive victories are needed to guarantee a spot in the 128-player main draw for the Grand Slam event, which begins Sunday. Shapovalov, Raonic, Felix Auger-Aliassime and Vasek Pospisil already have spots in the men's tournament. Bouchard and Leylah Annie Fernandez will be the lone Canadians in the women's draw (there are none in qualifying).

Game 2 of the Stanley Cup final is tonight. Underdog Dallas won the opener 4-1, taking advantage of a slow-starting Tampa Bay team that had only one day of rest after winning the Eastern Conference final over the Islanders. The Lightning came alive with a staggering 22 shots on net in the third period, but Anton Khudobin stopped them all. He's won four games in a row, making at least 32 saves in each of them. Tonight's game starts at 8 p.m. ET. Before that, the NHL will announce the winners of its biggest awards, including the Hart Trophy for MVP. For more on the Cup final, watch Rob Pizzo's newest two-minute recap video.

Jamal Murray and the Nuggets almost stole Game 2 against the Lakers. The Canadian guard scored 25 points and Denver led by two in the dying seconds last night when Murray swatted a potential game-tying jumper by L.A.'s Danny Green. But the ball went out of bounds, giving the Lakers just enough time to get the ball to Anthony Davis for a game-winning three at the buzzer. L.A. leads the series 2-0. Game 3 is tomorrow night. Game 3 of the East final is Tuesday. Miami leads that 2-1 after Boston's win on Saturday.

One of the WNBA's semifinal series is on hold because of COVID-19 test results. The opener of the Seattle-Minnesota matchup was postponed about 90 minutes before tipoff yesterday after an unspecified number of Seattle players produced inconclusive results. The WNBA said the players were in isolation and undergoing more testing. If everything checks out, Game 1 will take place Tuesday. The only two Canadian players left in the playoffs are involved in this series: Minnesota's Bridget Carleton and Kayla Alexander. No WNBA players have produced confirmed positive tests since the regular season began in late July in a bubble in Bradenton, Fla. Read more about the Seattle-Minnesota postponement here.

U.S. Open winner Bryson DeChambeau is the perfect blend of jock and nerd. At first glance, the beefy American golfer looks every bit the stereotype varsity athlete with his tight-fitting shirts and massive drives. He simply overpowered a tough Winged Foot course and his competition yesterday, cruising to a six-shot victory for his first major title. But there's more to DeChambeau than meets the eye. He's something of a mad scientist, obsessively bulking up his body and tweaking his game over the last year in order to pull off the ultra-aggressive strategy he's decided is the best way to win tournaments. It's paid off big-time, and more golfers might soon be copying him — kind of like how Tiger Woods' success sparked a fitness revolution in the sport.