CBC Sports' daily newsletter looks at Jamal Murray latest playoff magic and all the other good things that have happened for Canadian hoops in 2020.

Jamal Murray did it again

With apologies to Tristan Thompson's fine work during Cleveland's 2016 Finals upset of Golden State, no Canadian since Steve Nash has made this big an impact on the NBA playoffs. Murray had another monster performance last night, scoring 40 points in Game 7 to help the Denver Nuggets shock the L.A. Clippers and advance to the Western Conference final.

The 23-year-old guard from Kitchener, Ont., had cooled off after dropping a Jordanesque 50, 42 and 50 points in consecutive games to lead Denver's rally from a 3-1 series deficit vs. Utah in the first round. But when the Nuggets found themselves in that same-sized hole vs. the heavily favoured Clippers, he came through with 26, 21 and 40 in the three elimination games.

Denver is the first team in NBA history to overcome a pair of 3-1 deficits in the playoffs. And Murray's explosion last night made him the second-youngest player ever to score 40 or more in a Game 7. Lebron James was 65 days younger when he did it in 2008.

As if all that isn't sweet enough for Canadian basketball fans, last night's victory came at the expense of Raptors-spurning Kawhi Leonard (not that we're still bitter about that or anything). This was supposed to be the Clippers' year after they poached the reigning Finals MVP and (allegedly) elite wingman Paul George last summer. But the franchise has still never reached the conference finals in its checkered 49-year history. To put that in perspective, no other team in the four biggest North American sports leagues has gone more than 30 years without doing it. The Clips' latest humiliation also ruined the all-L.A. Western final that everyone anticipated — and that the NBA surely craved.

Instead, the matchup pits Murray and his equally-red-hot teammate Nikola Jokic (who had an absurd 16-point, 22-rebound, 13-assist triple-double last night) against the Lakers' even more dynamic duo of LeBron James and Anthony Davis. The latter is the top scorer still alive in the playoffs. He's averaging 27.6 points per game. Murray is second at 27.1, James third at 26.6 and Jokic fifth at 25.4. The series opens Friday night at 9 p.m. ET.

With his playoff heroics, Murray is putting the finishing touches on a banner year for Canadian basketball. Here's what else has stood out in 2020:

Second-year pro Shai Gilgeous-Alexander and rookie Lu Dort helped Oklahoma City become the biggest surprise of the NBA season. The Thunder were expected to tank after trading Paul George, but they finished fifth in the West as Gilgeous-Alexander led them in scoring and Dort won over fans with his hustle and defensive tenacity. SGA wasn't great in OKC's playoff loss to Houston, but Dort really made a name for himself in Game 7. He scored a career-high 30 points and helped limit Houston superstar James Harden to 17.

Three other youngsters finished off promising seasons. Second-year wing Dillon Brooks averaged 16.2 points and helped Memphis reach a play-in game in the Disney bubble. His rookie teammate Brandon Clarke was voted to the NBA All-Rookie First Team (announced today) after averaging 12.1 points and 5.9 rebounds. No. 3 overall draft pick RJ Barrett didn't make either of the all-rookie teams after an up-and-down season, but he still managed to score 14.3 points per game for an awful Knicks team.

Steve Nash was named head coach of the Brooklyn Nets. The Hall of Fame point guard has never worked this job at any level, but he's taking over a real contender. Two-time Finals MVP Kevin Durant will be back from his Achilles injury next season, and the Nets have another all-world scorer in Kyrie Irving.

Andrew Wiggins got a golden (State) opportunity. The much-maligned former No. 1 pick was traded from perennial loser Minnesota to Golden State in February. The injury-riddled Warriors finished last overall, but Wiggins played more efficiently in his 12-game stint with them than he has in his career. And he's still only 25. When Warriors stars Steph Curry and Klay Thompson return next season, Wiggins will be in a great position to finally make good on his talent.

Kelly Olynyk might be going to the NBA Finals. The veteran big man's Miami Heat took the opener of the Eastern Conference final vs. Boston in OT last night. Olynyk averaged 8.2 points in the regular season and is chipping in 6.6 in the playoffs.

The women's national team is ranked a best-ever fourth in the world after qualifying for the Tokyo Olympics in February. If the postponed Games go ahead next summer, Canada could challenge for its first-ever medal. The team's most prominent player, guard Kia Nurse, had a tough WNBA season for an awful New York Liberty team that finished last overall. But two Canadians are still alive in the playoffs — Bridget Carleton and Kayla Alexander of the Minnesota Lynx. Carleton averaged a modest 6.6 points in her second WNBA season, but she scored a career-high 25 back on Aug. 5.

Unfortunately, this was also supposed to be the year that the Canadian men's national team made a run at its first Olympic appearance since Nash dragged them there in 2000. Some of the country's key NBA players (including Murray) had already committed to playing in a last-chance qualifying tournament in Victoria, where Canada was grouped with NBA MVP Giannis Antetokounmpo's Greece team. Canada's head coach, Nick Nurse, was named the NBA's coach of the year a few weeks ago.

But the pandemic nixed everything and it's unclear what will happen next summer. Even if the postponed Olympics go ahead as scheduled, NBA players might not be able to participate. It looks like the 2020-21 season might not start until Christmas at the earliest, which could push the playoffs deeper into the summer. But if and when Canada's best NBA players can suit up, the men's team should be better than ever. That might be the best takeaway from this year. 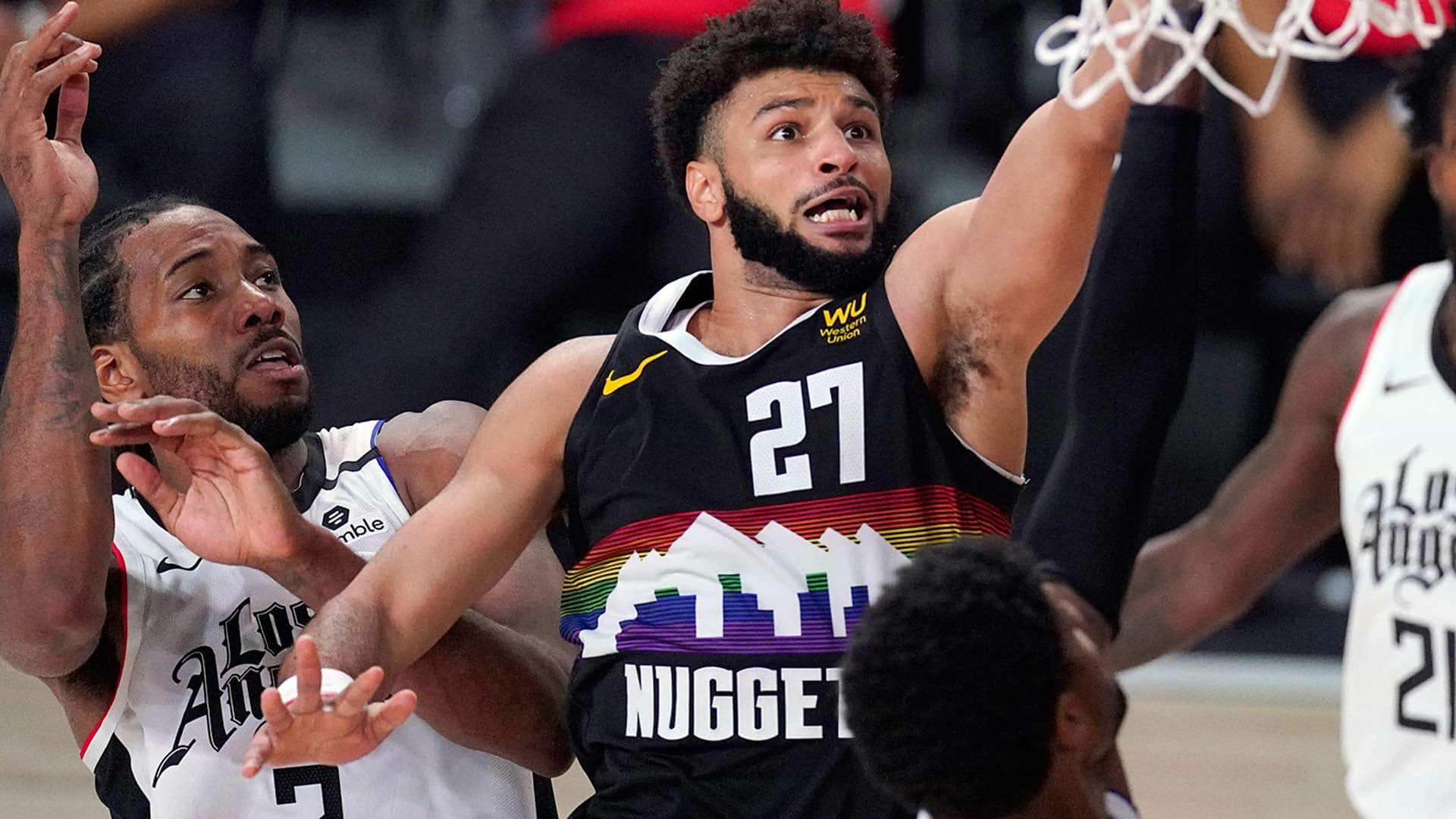 14 days ago
2:03
The Toronto Raptors are out of the NBA playoffs, but Canadian Jamal Murray is still shooting for an NBA Championship after a stellar season with the Denver Nuggets. 2:03

The Islanders stayed alive (maybe to their kids' chagrin). New York's double-OT win over Tampa Bay last night forced the Eastern Conference final to a Game 6 on Thursday. Dallas awaits in the Stanley Cup final, which the NHL and its players reportedly want to get started right away once the East is decided. Everything in the bubbles has gone swimmingly, but everyone still wants to get home as soon as possible. For a glimpse into why (that might make you cry), watch what happened when Jon Merrill and his wife surprised their three little daughters with his return home after Vegas was eliminated.

The Blue Jays' big series against the Yankees did not start well. Yesterday's newsletter was all about how you should jump on the Jays' bandwagon right now because they're surprisingly good this year and they're almost certainly headed for the playoffs in a couple of weeks. My timing, as always, was impeccable. Toronto promptly got shellacked 20-6 by the Yankees in the opener of their three-game series. The loss dropped the Jays a half game behind New York for second place in the AL East. That's big because the top two teams in each division get a spot in this year's expanded post-season. But don't panic. There are two wild cards available in each league, and the Jays would have to suffer an epic collapse over their final 13 games to not land one. So while last night's beating was definitely ugly, it dropped Toronto's playoff odds by less than a percentage point — to 97.5 per cent — according to ESPN's model. Read more about last night's loss (if you can stomach it) here.

The Big Ten pulled a 180. After initially deciding to postpone all of its fall sports seasons because of the pandemic (and taking heat from football players, their parents, coaches and even Donald Trump), the U.S. collegiate conference reversed course today and said football will kick off the weekend of Oct. 24. Teams will play eight games and the conference championship will be held Dec. 19 — in time to ensure the Big Ten is represented in the lucrative four-team College Football Playoff. With the Big Ten back in the fold, four of the so-called Power Five conferences (the ones that rake in the big TV money) are officially going ahead with fall football. The Pac 12 would like to, but public-health officials in California and Oregon won't even allow teams to practice yet. Read more about the Big Ten's about-face here.

Revenge is a dish best served with a buzzer-beater. This is one of the coolest sports stories of the year. Earlier this season, the defending WNBA champion Washington Mystics cut Shey Peddy. Last night, she faced her old team in the first playoff round, which is single-elimination. Guess who got the ball behind the three-point line with the Phoenix Mercury trailing by two in the final seconds? And guess who knocked it down at the buzzer to end Washington's title reign? Read more about Peddy's Hollwood-like ending and watch her game-winning shot here.