What you need to know for the French Open

CBC Sports' daily newsletter looks ahead to the final tennis Grand Slam of the year, where Denis Shapovalov is the best hope among Canada's six singles players.

The Blue Jays are back in the playoffs

Toronto clinched its first post-season appearance in four years with a 4-1 win over the Yankees last night in Buffalo. Hyun-Jin Ryu, who's proven to be every bit the ace the Jays paid for in free agency last winter, pitched seven shutout innings to finish the shortened regular season 5-2 with a sparkling 2.69 ERA. Vladimir Guerrero, Jr., who's been on a tear lately after a slow start to his second big-league season, homered and had three hits. He now has nine hits (five for extra bases) in his last four games. Read more about the playoff-clinching win here.

The regular season ends Sunday and the playoffs start Tuesday. The field was expanded this year from 10 teams to 16. The Jays will most likely end up with the American League's second wild card, which is the lowest playoff seed. That would mean a first-round matchup with the AL leader, which will probably be Tampa Bay. First-round series are best of three and they're played entirely in the ballpark of the higher-seeded team. We'll have a full explainer on this year's quirky baseball post-season and how the Jays fit into it in Monday's newsletter.

The final tennis Grand Slam of the year opens Sunday

The French Open was rescheduled from its usual late-May/early-June slot. Here are the key things to know about it:

Serena Williams and Rafael Nadal can both make history. Serena needs one more Grand Slam singles title to match Margaret Court's all-time record of 24. Nadal needs one more to tie Roger Federer's men's record of 20. Of the two, Nadal has the much better shot. He simply owns the French Open, winning it 12 times over the last 15 years, including the last three in a row. Nadal is seeded No. 2 (beyond world No. 1 Novak Djokovic) but he's favoured in the betting markets. Serena's clay-court game is relatively weak. She's won the French "only" three times and is seeded sixth, though bookmakers have her as the No. 4 favourite. Williams turns 39 on Saturday and is coming off a semifinal loss at the recent U.S. Open.

Attendance is better this time, but still not optimal. Many of the world's best players elected not to make the trip to New York for the U.S. Open. Five of the top seven women skipped it, and so did Nadal. Federer announced back in June that he was taking the rest of the year off after knee surgery. But apart from him, all of the top 10 men in the world rankings are competing in the French. It's not as rosy on the women's side, where four of the top 10 are out. Top-ranked Ash Barty decided not to defend her French Open title because of COVID-19 concerns, moving Simona Halep up to the top seed. World No. 3 Naomi Osaka is out with a hamstring injury after winning the U.S. Open. No. 10 Belinda Bencic is out, and so is No. 7 Bianca Andreescu. The Canadian hasn't played since injuring her knee 11 months ago, and she announced this week that she's done for the year. Another high-profile Canadian dropped out yesterday when 20th-ranked Milos Raonic withdrew from the men's event.

Denis Shapovalov is the Canadian to watch. With Andreescu out, Shapovalov is the highest-ranked Canadian in Paris. He's a career-best No. 10 in the world rankings after reaching the semifinals of the clay-court Italian Open last week, and is seeded No. 9 for the French. Shapo's first-round opponent is 53rd-ranked Frenchman Gilles Simon, and he faces a potential fourth-round clash with No. 5 seed Stefanos Tsitsipas. Shapovalov has won three of their four career meetings.

There are five other Canadians in the singles draws. In the men's tournament, it's 19th-seeded Felix Auger-Aliassime, Vasek Pospisil (ranked 76th in the world) and qualifier Steven Diez (179th). If Diez survives his opening match, he'll likely face Nadal in the second round. On the women's side, Canada has 100th-ranked Leylah Annie Fernandez and 168th-ranked Genie Bouchard. The 18-year-old Fernandez picked up her first Grand Slam match win at the U.S. Open. Bouchard made the French Open semifinals in 2004 but has won only one Slam match over the last two years.

There will be (some) fans. No spectators were allowed at the U.S. Open, but French organizers initially planned to allow 11,500 spectators on the 30-acre grounds of Roland Garros each day. That was later cut to 5,000, and now it's down to 1,000 because of new restrictions imposed by the French government.

Steven Stamkos is out again. The Lightning captain made a surprising and dramatic return to the lineup on Wednesday night. Playing for the first time since February, he scored a goal to help Tampa Bay to a blowout win vs. Dallas in Game 3 of the Stanley Cup final. But Stamkos played less than three minutes before appearing to suffer a setback (likely related to the core-muscle surgery he had back in the winter) and sat the rest of the game. Coach Jon Cooper said today that Stamkos won't play in Game 4 tonight, but wouldn't rule him out for the rest of the series. Game 5 is Saturday night, and the Lightning lead the series 2-1, so there's a chance the Cup is awarded then.

If Tampa Bay wins the Cup, it'll be tough to choose an MVP. Nikita Kucherov leads all playoff scorers with 30 points in 22 games, while Brayden Point is second with 28 points and first in goals with 11 (in 20 games). Victor Hedman has 10 goals — just two behind Paul Coffey's record for a defenceman in a single post-season. And Andrei Vasilevskiy has been his usual brilliant self in net. As Rob Pizzo notes in his daily 2-minute NHL playoff recap video, you could make a Conn Smythe Trophy argument for all four.

Jamal Murray and the Denver Nuggets are in a tough (but familiar) spot. For the third playoff series in a row, Denver trails three games to one after losing 114-108 last night to the Los Angeles Lakers. Of course, the Nuggets wouldn't be here if they hadn't roared back to beat both Utah and the L.A. Clippers. But this time, they're facing a team with two genuine superstars in LeBron James and Anthony Davis, who combined for 60 points in Game 3. Jamal Murray was Denver's best player last night, scoring 32 points and dishing out eight assists while playing 45 of the game's 48 minutes. But the Canadian went without a field goal in the final five minutes after James took over responsibility for guarding him. Earlier in the game, Murray created the highlight of the night with this incredible layup on LeBron: 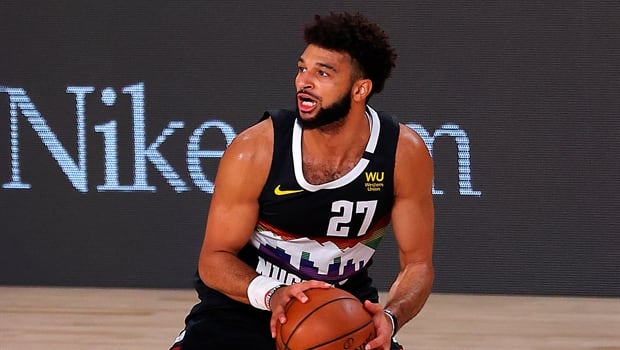 1 month ago
0:49
Jamal Murray continues his breakout performance in the NBA bubble with another highlight reel play. 0:49

Denver now faces elimination (again) in Game 5 on Saturday night. Tonight, Miami can finish off Boston and advance to the NBA Finals with a win in Game 5 of the Eastern final.

Curling is back. More than six months passed between professional bonspiels in Canada. But a few small-purse events are finally taking place this weekend, including a mixed-doubles tournament in Waterloo, Ont. Six-time Scotties champ Jennifer Jones and her husband, Brent Laing, are one of the 10 teams competing there. Jones says this is the first time she's set foot on the ice since the Scotties in February. She'll notice a few differences, including masks on players and decals on the ice to indicate where they should stand to ensure physical distancing. Read more about the return of curling in a pandemic in this story by CBC Sports' Devin Heroux.

Happy 20th anniversary to this great moment in Olympic history:

20 years ago today, Vince Carter threw down the nastiest dunk of all time 😱 <a href="https://t.co/JhW1QHYQAh">pic.twitter.com/JhW1QHYQAh</a>