Vancouver's Vasek Pospisil and American partner Jack Sock won the Wimbledon men's doubles title on Saturday in an upset of the Bryan brothers. 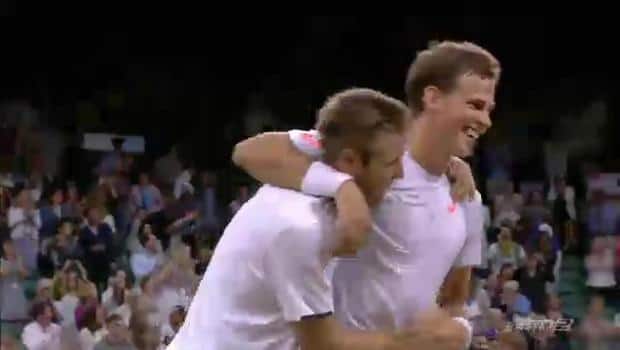 6 years ago
3:28
A mixed day at Wimbledon as Vasek Pospisil wins in doubles while Eugenie Bouchard settles for second. 3:28

Vancouver's Vasek Pospisil and American partner Jack Sock won the Wimbledon men's doubles title on Saturday in an upset of the defending champions Bob and Mike Bryan of the United States 7-6 (5), 6-7 (3), 6-4, 3-6, 7-5 in a three-hour, six-minute thriller.

Pospisil and Sock were playing together for the first time and are the first team since 2000 (Lleyton Hewitt and Max Mirnyi) to win a Grand Slam title in their first tournament together. The Bryan twins were bidding for a 16th Grand Slam doubles title and 99th overall.

Pospisil said they had a simple formula for beating the all-time best doubles pair in Grand Slam history.

"Close your eyes; hope you play the best tennis of your life," he said, smiling.

Sock and Pospisil were playing on Centre Court for the first time. Pospisil was playing in only his fifth doubles event at a major.

"We had a lot of fun, people could see that," Sock said. "That's part of why we did well. We really enjoyed being out there. As kids we grew up watching this tournament. This is what we kind of dreamed of doing."

The 21-year-old Sock became the third-youngest player to win both a Grand Slam men's doubles title and a Grand Slam mixed doubles championship in the Open era, adding to the mixed title he won with American Melanie Oudin at the U.S. Open in 2011.

Todd Woodbridge and John McEnroe, both 20, were the only men to win both titles at a younger age, with McEnroe being the youngest.

Pospisil's previous best was the round of 16 with Ottawa's Jesse Levine at Wimbledon in 2013 and with Toronto's Daniel Nestor at the 2013 US Open.

The last time there was a Canadian man in the Wimbledon doubles final was in 2009 when Nestor and Nenad Zimonjic won their second All England Club title.

Pospisil and Sock saved four match points over two fifth-set games before Scok drilled a winner down the line for the historic victory.

Nestor and Kristina Mladenovic of France lost to Mirnyi and Chan Hao-Ching of Taiwan 7-6 (4), 7-5 in the mixed doubles semifinal.

Nestor and Mladenovic saved three match points on the Chan serve before Mirnyi poached a winning volley to end the 90-minute match.