To say that Kevin Anderson won this interminable Wimbledon semifinal, and that John Isner lost it, didn't really seem fair. To Anderson, anyway.

They had played on and on, through 6 1/2 hours of ho-hum hold after ho-hum hold, during the second-longest match in the history of a tournament that began in 1877, all the way until the never-ending serving marathon did, finally, end at 26-24 in the fifth set Friday, with Anderson claiming the most important of the 569 points — the last. 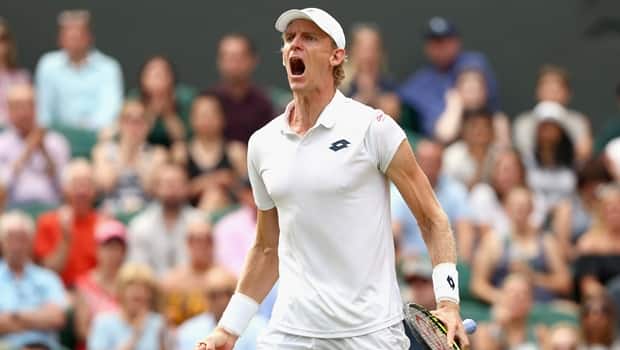 He continued: "John's such a great guy, and I really feel for him, because if I'd been on the opposite side, I don't know how you can take that, playing for so long and coming up short."

Only one match at Wimbledon lasted longer: Isner's 2010 first-round victory over Nicolas Mahut, the longest match in tennis history. It went more than 11 hours over three days and finished 70-68 in the fifth on Court 18, which now bears a plaque commemorating it.

Novak Djokovic was leading Rafael Nadal 6-4, 3-6, 7-6 (9) in a compelling showdown filled with entertaining points that was suspended as soon as the third set concluded at just past 11 p.m., the curfew at the All England Club. Some people in the stands booed the decision to halt the match after a fantastic tiebreaker in which Nadal wasted three set points at 6-5, 7-6 and 8-7. Djokovic cashed in on his second when Nadal's backhand found the net after an 18-stroke exchange. 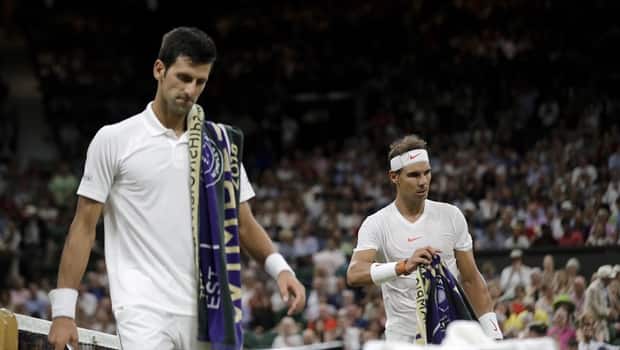 Because Nadal and Djokovic didn't begin playing until after 8 p.m., the retractable roof above the main stadium was shut between the matches and the arena's artificial lights were turned on. Now they'll come back Saturday to figure out who will face Anderson in the final, resuming at 1 p.m. local time, under the roof.

The women's final between Serena Williams and Angelique Kerber will then follow. That creates an unusual situation: Instead of a standard 2 p.m. start, Williams and Kerber won't know exactly when their match will begin.

Anderson will certainly appreciate the chance to put his feet up ahead of Sunday's final, while Nadal and Djokovic — who have a combined 29 Grand Slam titles between them, five at Wimbledon — push each other some more.

Friday's fifth set wasn't quite as long, but still, it lasted nearly 3 hours as the semifinal became a test of endurance more than skill.

"He stayed the course incredibly well," said the No. 9 seed Isner, a 33-year-old American playing in his first major semifinal. "Just disappointed to lose. I was pretty close to making a Grand Slam final and it didn't happen."

Anderson finally earned the must-have, go-ahead service break with the help of a point in which the right-hander tumbled to his backside, scrambled back to his feet and hit a shot lefty.

"That definitely brings a smile to my face," Anderson said. "At that stage, you're just trying to fight in every single moment, and I was like, 'Just get up!"'

The No. 8 seed Anderson eliminated eight-time Wimbledon champion Roger Federer in a 13-11 fifth set in the quarter-finals Wednesday. Between that and the energy-sapper against Isner, it's hard to imagine how Anderson will have much left for Sunday's final, his second at a major.

Anderson was the runner-up to Rafael Nadal at last year's U.S. Open. There could be a rematch now. Anderson's opponent for the title will be Nadal or Novak Djokovic, who began their semifinal after 8 p.m. on Friday evening. Because it was so late, the All England Club shut the retractable roof above the main stadium between the matches and turned on the arena's artificial lights.

Wimbledon doesn't use tiebreakers in the fifth set for men, or third set for women, so there's nothing to prevent a match from continuing ad infinitum. Both Isner and Anderson said they'd like to see that change.

"It's long overdue," said Isner, who suggested changing the rule to using a tiebreaker at 12-all in the fifth set. "I'm a big part of that, and a big part of this discussion, of course."

At one point in the fifth set, a spectator shouted, "Come on, guys! We want to see Rafa!"

The 6-foot-8 Anderson and 6-foot-10 Isner go way back, to their college days, Isner at Georgia, Anderson at Illinois. In the pros, Isner had won 8 of 11 previous matchups. But this one was as close as can be.

There wasn't a whole lot of intrigue, or momentum shifts. Not a tremendous amount of memorable shotmaking, either, save for some impressive return winners.

"The effort they both put in and the performance and the guts, the way they competed — a lot to be proud of," said Justin Gimelstob, one of Isner's coaches.

Both failed to seize early opportunities. Isner wasted a set point in the opener. Anderson served for the third at 5-3, got broken, then had a pair of set points in that tiebreaker, double-faulting one away.

By the latter stages, with break chances so rare, murmurs would spread through the Centre Court stands whenever a game's returner got to love-15 or love-30.

Could we be about to see the sixth and last break of a match that would end up with 90 holds?

Repeatedly, the answer was, of course, "No," even when Anderson held break points at 7-all, 10-all and 17-all. The 10-all game ended with Isner hitting a forehand passing winner on the run to hold, then letting his momentum carry him directly to his sideline chair, where he plopped himself down.

Gabriela Dabrowski's run at Wimbledon is over.

The Canadian and partner Yifan Xu of China, seeded sixth, lost 6-3, 4-6, 7-5 to No. 12 seeds Nicole Melichar of the U.S., and Kveta Peschke of the Czech Republic in the Wimbledon semifinals on Friday.

Dabrowski and Xu were up a break at 4-2 in the third set, but could not hold on.

The roller-coaster match saw Dabrowski and Xu fight off three match points before tying it at 5-5 in the third set. However, Melichar and Peschke won the next two games to seal it.

The 26-year-old Dabrowski, of Ottawa, has won two Grand Slam mixed doubles titles (the 2018 Australian Open and 2017 French Open), but never had advanced past the quarter-finals in women's doubles at a major before this week.

Melichar and Peschke will face No. 3 seeds Barbora Krejcikova and Katerina Siniakova of the Czech Republic in the final.