U.S. Open: Denis Shapovalov's run comes to an end in round of 16

Canadian teen Denis Shapovalov fell to Pablo Carreno Busta in a closely-contested match at the U.S. Open on Sunday in New York.

Shapovalov's inability to find his forehand and reliance on second serves were his undoing in the two hour, 54 minute match at Arthur Ashe Stadium. 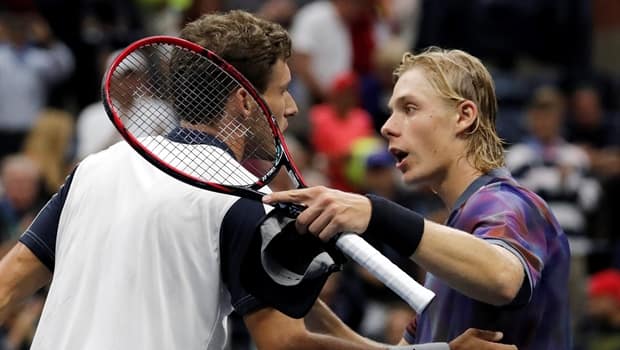 But Shapovalov focused on the positive of his run in New York and what sure looks like a bright future ahead.

"Honestly, it was so much fun to be part of that atmosphere and the match and this whole two weeks," Shapovalov said. "You know, it's another life-changing event for me."

The 18-year old from Richmond Hill, Ont., was hoping to become the youngest U.S. Open quarter-finalist since Andre Agassi in 1988, when he was also 18.

Shapovalov had eight aces to Carreno Busta's one, but the younger player also had 55 errors to the Spaniard's 25.

After building a 5-2 lead in the first set, unforced errors and a struggling forehand started to slow down Shapovalov with Carreno Busta tying the set 5-5.

Carreno Busta, 26, put his return into the net to give Shapovalov a 6-5 lead, but the Canadian wasn't able to close out the set, with the veteran Spaniard forcing a tiebreak.

"It was very tough, because three hours, three sets, three tiebreaks, but of course it was an amazing victory for me," Carreno Busta said. "Now I'm in quarterfinals again of a Grand Slam, first time here in U.S. Open, and will try to continue."

Mistakes kept piling up for Shapovalov in the second set, with Carreno Busta pulling out to a 3-1 lead.

Still struggling to find his stroke, Shapovalov turned to the crowd and shouted with joy after an overhand smash cut Carreno Busta's lead to 5-4 and give the young Canadian serve.

Tied up at 5-5, Shapovalov put the ball into the net to give Carreno Busta the 6-5 lead. But a well-placed backhand by Shapovalov tied it 6-6 and forced a second tiebreak.

Again, unforced errors cost Shapovalov as he lost that tiebreak on a forehand that went long.

Seemingly refocused after the changeover, Shapovalov raced out to a 3-0 lead in the third set. However, Carreno Busta broke back to win three straight games and tie it 3-3.

Two more unforced errors by Shapovalov made it 5-5, with Carreno Busta's consistency wearing down the emotional teenager.

Shapovalov took a one-game lead but Carreno Busta took it right back to force the third tiebreak and push the match past the 2:45-mark — the longest ATP match Shapovalov has competed in in his young career.

Shapovalov dropped his bags on the court to stop and thank the crowd, patting his heart and blowing kisses to the vocal audience before continuing his walk to the locker room.

Maybe this was just one three-setter too many for Maria Sharapova.

Sharapova tried a bit of everything, even resorting to switching over her racket to hit a few lefty shots. Still, the five-time major champion could not quite keep her Grand Slam comeback from a doping suspension going, losing in the fourth round of the U.S. Open to 16th-seeded Anastasija Sevastova of Latvia 5-7, 6-4, 6-2 on Sunday.

This was the third time in her four matches that Sharapova went the distance and she faded down the stretch, while also dealing with a right hand that was treated and taped by a trainer in the final set. Sharapova's miscues kept closing exchanges, and she dropped 13 of the first 14 points in that set.

The 30-year-old Russian finished with 51 unforced errors, compared to 14 for Sevastova. 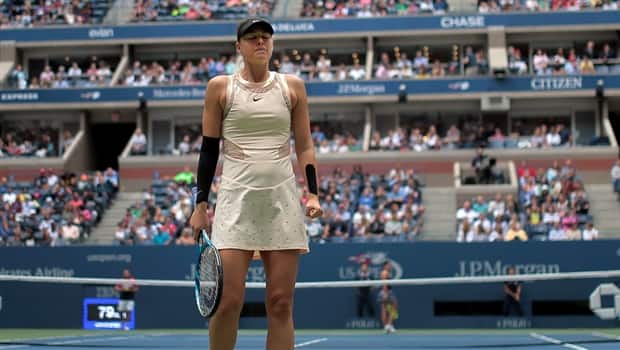 Maria Sharapova is out after controversial run at U.S. Open

Sharapova hadn't played in a major tournament since the Australian Open in January 2016, when she tested positive for the newly banned drug meldonium. She served a 15-month ban for that, returning to the tour this April with a ranking too low to get into Grand Slam events.

She was able to enter the U.S. Open thanks to a wild card from the U.S. Tennis Association, which then proceeded to put its 2006 champion in Arthur Ashe Stadium every time she played over the past week, drawing strong support from spectators — and criticism from another former No. 1-ranked woman, Caroline Wozniacki.

Sevastova made Sharapova run a lot by pulling her forward with drop shots or tight angles, then would often deposit follow-up strokes into open spaces. On one point won by Sharapova in the second set, she twice tracked down lobs that she got back over the net by hitting the ball left-handed.

But she could not sustain enough strong play, and Sevastova advanced to the U.S. Open quarter-finals for the second consecutive year.

Venus Williams reached the U.S. Open quarter-finals for the second time in three years with a 6-3, 3-6, 6-1 victory over Carla Suarez Navarro of Spain.

The 37-year-old American is the oldest woman in the bracket. She owns seven Grand Slam titles, including two in New York in 2000 and 2001. 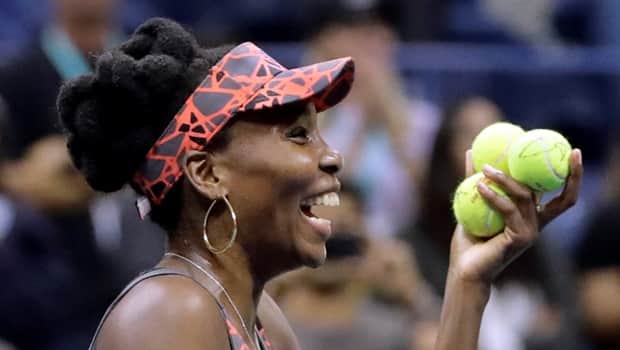 The No. 9-seeded Williams is trying to get to her third Grand Slam final of the season. She lost to her younger sister Serena Williams at the Australian Open and to Garbine Muguruza at Wimbledon.

Muguruza, the reigning Wimbledon champion, jumped out to a 4-1 lead in the opening set and earned three break points for a chance to go up 5-1. But the 13th-seeded Kvitova managed to hold there, starting a run in which she grabbed five of six games on the way to the tiebreaker in a terrific set filled with big hitting from both women. 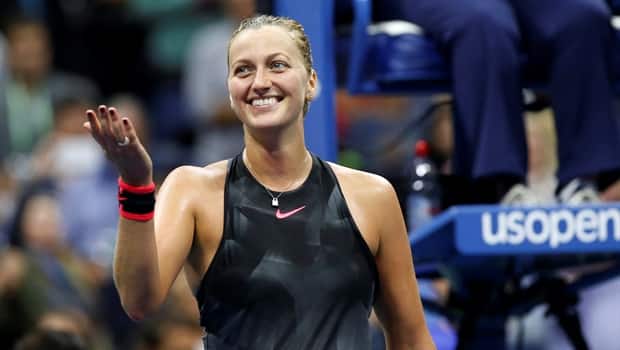 3 years ago
1:16
Kvitova defeated the 3rd ranked Muguruza in straight sets on Sunday. 1:16

Muguruza broke to begin the second set, but Kvitova again turned things around quickly and advanced to a matchup against Venus Williams.

This was the biggest victory of Kvitova's return to competition after a knife attack by an intruder at her home in the Czech Republic in December. She needed surgery on her racket-holding hand and rejoined the tour at the French Open in May.

Kvitova's only other trip to the quarter-finals at Flushing Meadows came in 2015, when she lost at that stage to eventual champion Flavia Pennetta.