Denis Shapovalov gets Canada off to winning start at U.S. Open

Denis Shapovalov advanced to the second round of the U.S. Open with a 6-4, 4-6, 6-3, 6-2 win over American qualifier Sebastian Korda on Monday.

Denis Shapovalov advanced to the second round of the U.S. Open with a 6-4, 4-6, 6-3, 6-2 win over American qualifier Sebastian Korda on Monday.

Shapovalov, the 12th seed from Richmond Hill, Ont., had to take a medical time out in the third set, but was dominant from that point on.

He finished with 13 aces and 35 winners, though his aggressive style also resulted in 43 unforced errors.

Shapovalov won four of his 14 break point opportunities. He only faced break point twice, saving one of those chances. 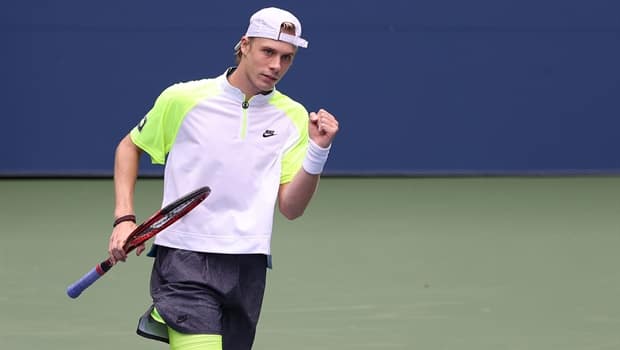 Shapovalov advances at U.S. Open with win over Korda

The Canadian next faces the winner of a match between American Thai-Son Kwiatkowski and South Korean Soonwoo Kwon.

Top-seeded Karolina Pliskova advanced in straight sets with a 6-4, 6-0 win over Anhelina Kalinina, while on the men's side, No. 9 seed Diego Schwartzman blew a two-set lead and was knocked out by Cameron Norrie 3-6, 4-6, 6-2, 6-1, 7-5 in a match that took nearly four hours. 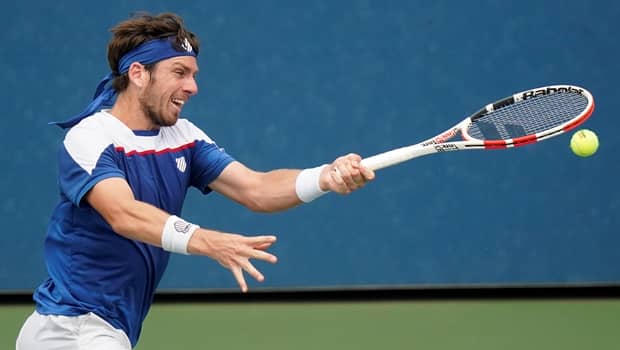 3 months agoVideo
1:08
Down 2 sets, 76th ranked player in the world Cameron Norrie comes back to defeat 9th seed Diego Schwartzman in the opening round of the U.S. Open. 1:08

Djokovic is the overwhelming favourite to win his fourth men's championship and he cruised in his first-round matchup at Arthur Ashe Stadium. Djokovic pounded his chest and raised his racket in the air, keeping his celebratory routine intact even without fans in the stadium.

Naomi Osaka wore a black mask with the name of Breonna Taylor emblazoned across the front before the start of her U.S. Open match.

Osaka tweeted during the Western & Southern Open that she was exhausted and "sick" over the many Black people killed by police. She had decided to withdraw from the tournament as a statement in support of racial justice, joining athletes in other sports. Other tennis players expressed support and the tournament was halted for one day,

Osaka, the 2018 U.S. Open champion, wore the mask for Taylor, a Black woman killed by police this spring.

Once her match began, Osaka managed to overcome her own uneven play to pull out a three-set victory over Misaki Doi in an all-Japanese matchup.

The No. 4-seeded Osaka's movement was an issue at times but she managed to win 6-2, 5-7, 6-2 against the 81st-ranked Doi in an empty Arthur Ashe Stadium as midnight approached.

Osaka made 38 unforced errors, 13 more than her winner total.

Osaka is coming off a left hamstring injury that forced her to withdraw from the final of the Western & Southern Open on Saturday.

Earlier, Coco Gauff of the United States was dealt an early exit.

It was Gauff's earliest elimination from a Grand Slam tournament in four appearances. A year ago, Gauff made it to the third round at Flushing Meadows before losing to 2018 champion Naomi Osaka in a match that ended in tears for the teen and a hug from the winner.

Sevastova had been just 1-8 in singles in 2020 and got the breakthrough win she needed again in New York. Sevastova was a semifinalist at the U.S. Open two years ago.