Serena Williams closed out the Grand Slam season with a commanding 6-3, 6-3 victory over Caroline Wozniacki at the U.S. Open. 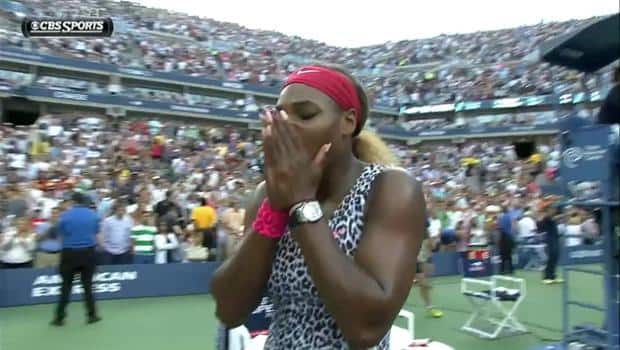 Williams equaled Chris Evert and Martina Navratilova with 18 major singles titles, the fourth-most in history. Williams also matched Evert's total of six championships at the U.S. Open and became the first woman to win three in a row since Evert's four-title run from 1975-78.

Williams earned $4 million, a record in tennis — $3 million for the title, plus a $1 million bonus for having had the best results during the North American summer hard-court circuit.

It was a dominant performance to cap a dominant two weeks in Flushing Meadows. Not only did Williams, ranked and seeded No. 1, win all 14 sets she played in the tournament, she never even dropped more than three games in any of them.

Until the U.S. Open, though, Williams had not been at her best on her sport's biggest stages in 2014. She lost in the fourth round at the Australian Open, the second round at the French Open, and the third round at Wimbledon, where a disoriented Williams also struggled through an odd appearance in doubles that was attributed to a viral illness.

Back at the top of her game, Williams broke Wozniacki's serve five times and compiled a hard-to-believe 29-4 edge in winners.

Remarkably, until a cross-court backhand on the run in the final game that even Williams applauded, the only winners registered by the 10th-seeded Wozniacki came on a trio of aces, one in the first set, two in the second.

That was, in part, a result of the Dane's iffy play in only her second Grand Slam final — she lost to Kim Clijsters at the 2009 U.S. Open — but more due to Williams' relentless pursuit of every ball.

A few weeks shy of her 33rd birthday, making the American the oldest major champion since Navratilova was 33 at Wimbledon in 1990, Williams simply would not allow a shot to get past her. Wozniacki is the one training for the New York City Marathon, but Williams tired her out by the end.

I'm madly deeply in love w/ all my fans. Thank YOU each&amp;EVERY one of u personally for all the support. You make me feel special Love forever

Wozniacki was not exactly an extra in this Williams highlight reel, but pretty close to it. The points were being directed by Williams, whether via serves that reached 194 kph, forceful returns that backed Wozniacki into a corner when not producing outright winners, unreachable groundstrokes from all angles or even the occasional volley.

Yes, this, as might have been expected, was really all about Williams. At times, it felt as if Wozniacki were there because, well, someone needed to be on the opposite side of the net to act as Williams' opponent.

They've been good pals for years, and they hung out together in Miami — heading to the beach, watching an NBA playoff game — right after both lost early at the French Open in May. Wozniacki says Williams helped her get over the end of her engagement to golf star Rory McIlroy.

That friendship between Williams and Wozniacki did not matter one bit, of course, while they played Sunday with so much at stake as early evening shadows moved across the court in Arthur Ashe Stadium.

As Williams put it beforehand, referring to her older sister, "If I can play Venus, I can play anybody."

Sure looked that way Sunday.