10th-seeded Nishikori, No. 14 Cilic to meet in Monday's final 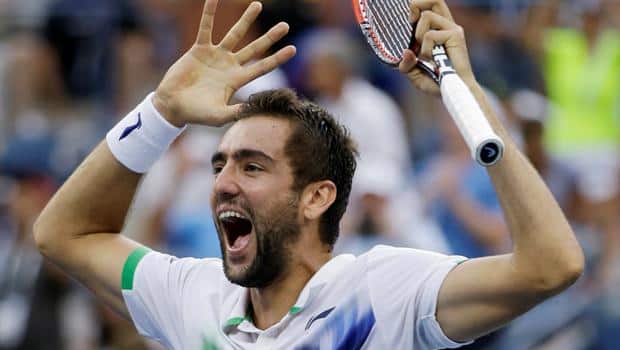 Instead of Novak Djokovic vs. Roger Federer for the U.S. Open title, first-time Grand Slam finalists Kei Nishikori and Marin Cilic will vie for the championship after a pair of semifinal surprises Saturday.

First, Japan's Nishikori became the first man from Asia to reach a major singles championship match by staying fresher than Djokovic in stifling heat and winning 6-4, 1-6, 7-6 (4), 6-3.

Then, Croatia's Cilic used every bit of his six-foot-six frame to deliver stinging serves and flat groundstrokes during a quick-as-can-be 6-3, 6-4, 6-4 victory over Federer.

"It's fairly simple, I think: Marin played great and I maybe didn't catch my best day," Federer said after his one-hour, 45-minute loss. "That's pretty much it in a nutshell."

So much for No. 1-seeded Djokovic facing the No. 2-seeded Federer in a matchup between men who have combined to win 24 Grand Slam trophies. In what some will see as signaling a generational shift in tennis, Monday's final will be No. 10 Nishikori against No. 14 Cilic.

"That's going to be a sensational day for both of us," said Cilic, who at 25 is a year older than Nishikori.

For the first time in nearly a decade, since Marat Safin beat Lleyton Hewitt at the Australian Open in January 2005, a major final will be contested without at least one of Federer, Djokovic or Rafael Nadal, who didn't attempt to defend his 2013 U.S. Open title because of a right wrist injury.

That trio won 34 of the past 38 Grand Slam trophies, including two months ago at Wimbledon, when Djokovic edged Federer in a five-set final.

"It's exciting for the game to have different faces from time to time," the 33-year-old Federer said. "It's definitely refreshing to some extent. It's big for Croatia; it's big for Japan."

Cilic, forced to sit out last year's U.S. Open during a doping suspension, is the first man from Croatia to get this far at a major since his coach, Goran Ivanisevic, won Wimbledon in 2001.

That's nothing compared to Japan's wait.

As it is, Nishikori was the first man from his country to reach a Grand Slam semifinal since 1933.

"Very happy to make history," said Nishikori, who moved to Florida at age 14.

He weaved his way through a pair of five-setters totaling more than 8 1/2 hours while No. 3 Stan Wawrinka and No. 5 Milos Raonic, yet appeared much more lively as the temperature neared 100 degrees (37 Celsius) than Djokovic, a guy widely considered as fit as they come.

Especially in the pivotal third-set tiebreaker. He missed a pair of backhands. He double-faulted. He missed a forehand, and another to end the set, then smacked a ball in anger. Up in the stands, Nishikori's coach, 1989 French Open champion Michael Chang, rose to his feet and pumped his fists.

Making Nishikori's performance all the more impressive is that as recently as a few weeks ago, he was swinging a racket while seated in practice, unable to run because he had a cyst removed from the bottom of his right foot in August.

"I didn't even know if I should come to New York," he said, "so I wasn't expecting nothing, actually."

"He might not have prepared the best way he knows how. But just because you haven't done that doesn't mean that you don't give yourself the opportunity to come out and play," Chang said. "That's why I told him, `You get past the first round, the second round, anything can happen."'

There would be no such comeback against Cilic, who worked to improve his game while sidelined after testing positive for a stimulant in May 2013. He said he ingested the substance accidentally via a glucose tablet; the International Tennis Federation sought a two-year ban but it eventually was reduced to four months.

Cilic had only played one previous major semifinal, at the 2010 Australian Open, while this was Federer's 36th. And Cilic came into the day with an 0-5 head-to-head record.

But this one went the other way. Wasn't even close.

Cilic hit serves at up to 132 mph (213 kph) and finished with 13 aces, including three in the final game. That he would serve effectively was no surprise. What truly stood out, though, was the way Cilic managed to hang with Federer in exchanges from the baseline.

The fourth-seeded Russians rallied after losing the first set and going down a break in the second to beat Hingis and Flavia Pennetta 2-6, 6-3, 6-2 on Saturday night.

Playing doubles in her latest comeback from retirement, the 33-year-old Hingis was in her first major final since the 2002 Australian Open. She has won nine Grand Slam doubles titles to go with her five major singles championships.

Makarova was routed by No. 1 Serena Williams 6-1, 6-3 on Friday in her first major singles semifinal. She and Vesnina beat the Williams sisters in the quarters in doubles.