Sounds outrageous, but it's not that simple. Here’s what you should know about the Canadian tennis event's pay gap and why it exists — but maybe doesn’t have to.

There are reasons the pay gap exists — but does it have to?

The inequality extended beyond the champions' cheques. The total purse for the women's event was about $2.8 million. The men's was worth $5.7 million.

Sounds outrageous, right? Equal pay for equal work is a concept that reasonable people generally accept. And pro tennis is on board: the Grand Slam tournaments all offer equal prize money, and so do some other high-end tour stops that feature both a women's and a men's event. Shouldn't the Rogers Cup follow suit?

Well, it's not as simple as that. Here's what you should know about the Rogers Cup pay gap and why it exists — but maybe doesn't have to.

1. It's not because men's tennis brings in more revenue than women's

It's true the men's game commands a lot more money for stuff like sponsorships and broadcast rights. But the sport decided years ago that prize money would be equal when men and women play in tournaments held under the same umbrella — if those tournaments are of equal importance.

2. The Rogers Cup men's and women's tournaments are not equal

This is the key point. The men's tour classifies the Rogers Cup as a Masters 1000 event (1,000 is the number of rankings points the winners gets). If we disregard the season-ending ATP Finals, which is only for the top eight players in the world, Masters 1000 is the second-highest tier of events. Only the four Grand Slams are higher.

Meanwhile, the women's tour classifies the Rogers Cup as a Premier 5 event. The winner of one of these gets 900 points. This is the third tier of normal tournaments for women — below the Slams (2,000 points) and the four Premier Mandatory events (1,000 points). As you might guess, the more points an event is worth, the more prize money is offered.

3. If both Rogers Cup tournaments were of equal value in rankings points, the women would get equal prize money

This was the case for the other event Andreescu won this year. The BNP Paribas Open in Indian Wells, Calif., has both a men's and a women's tournament, and they're both 1,000-point events. Andreescu made $1.354 million for winning it. Men's champ Dominic Thiem got the exact same amount.

It'll be the same at the U.S. Open, which starts on Aug. 26. The men's and women's champions at the final Grand Slam of the season will each walk away with $3.85 million. Bottom line: organizers who stage concurrent tournaments worth equal rankings points have to pay the women the same as the men.

4. The Rogers Cup isn't alone in having unequal men's and women's tournaments

A few other tour stops feature a men's 1,000-point tournament alongside a women's 900-point tournament. This week's Western & Southern Open in Cincinnati is one example. The China Open in Beijing is the reverse: its women's tournament is a 1,000-pointer and the men's is a 500, so the women make more money there. 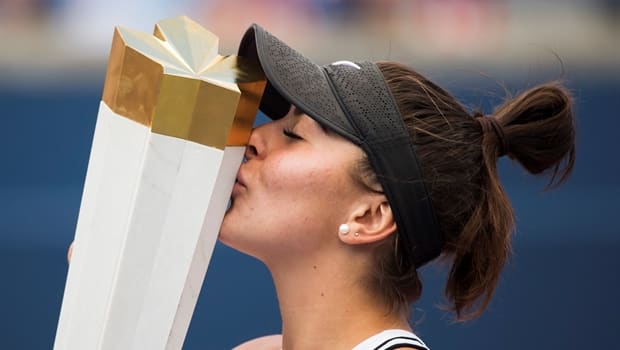 2 years ago
10:59
The Canadian teen sat down with Adrienne Arsenault to talk about her incredible run at the Rogers Cup. 10:59

5. The men are still treated better, though, because they have more 1,000-point events

There are nine Masters tournaments for men, compared to only four Premier Mandatory events for women. The women's tour sort of makes up the difference with its five Premier 5 events — but they don't quite do the trick. Remember, those are 900-point events. So the prize money is less. Until the women's tour offers the same number of big-money 1,000-point events as the men get, you can argue that tennis hasn't really achieved pay equality.

6. It doesn't necessarily have to be this way

They might do it anyway. A Tennis Canada spokesperson told CBC Sports the organization is "concerned" with the pay gap at the Rogers Cup and will "seriously consider" taking some of the revenue increases it expects to see in coming years from selling the tournament's broadcast rights and using them to "close the gap over time." Tennis Canada is also in the process of equalizing the prize money at all the lower-tier pro events it runs.

Here's an idea for how the women's tour could close the pay gap at events that still have one: recruit a sponsor willing to top up the women's prize pool for those tournaments. It's already been done to some extent. A Japanese cosmetics company signed on as the new title sponsor for this year's WTA Finals in Shenzhen, China, and the winner could now pocket as much as $4.75 million. That's not only a lot more than the $2.71 million the winner of the men's ATP Finals in London will make — it's the biggest cash prize in the history of tennis. Seems like a good look for the brand, the tournament and the players. Everybody wins.