So much for the first U.S. Open matchup between Roger Federer and Rafael Nadal. Federer failed to live up to his end of the bargain, falling in four sets to 2009 champion Juan Martin del Potro on Wednesday night.

So much for the first U.S. Open matchup between Roger Federer and Rafael Nadal.

Federer failed to live up to his end of the bargain.

Hours after Nadal did his part with an easy-as-can-be victory to get to the semifinals at Flushing Meadows, Federer was unable to join him for what would have been the most-anticipated showdown of the entire two weeks, wasting chances to take control and missing makable shots in a 7-5, 3-6, 7-6 (8), 6-4 loss to 2009 champion Juan Martin del Potro on Wednesday night. "He came up with the goods when he needed to," Federer said, "and I helped him a little bit sometimes, too, maybe."

Federer described himself as too "edgy" and said "that little magic was missing."

He also insisted that, unlike just about everyone else, he did not spend any time at all pondering a possible matchup with Nadal at the only Grand Slam tournament where they've never met. Their wonderful rivalry has included 37 matches, and at least two finals at each of the other majors.

Federer entered the quarter-finals with an 18-0 Grand Slam record this season, including titles at the Australian Open and Wimbledon to raise his record count to 19 major championships.

But he tweaked his back at a tournament last month, curtailing his preparation for the U.S. Open, and he was not quite at his best for stretches. He needed five sets to win each of his first two matches — and Wednesday, he succumbed to the same formula of massive forehands and booming serves that del Potro used when he upset Federer in the final eight years ago.

"I had struggled too much throughout the tournament," Federer said, "to think too far ahead."

Nadal gets his wish

Before the tournament began, Nadal was honest as can be when asked whether he hoped to face Federer at the only Grand Slam tournament where they've never met.

The answer, the No. 1-seeded Nadal said earnestly, was no — because he'd rather go up against someone easier to beat.

Well, as it turns out, he'll go up against del Potro on Friday, when the other semifinal features two men who have never been this far at any major: No. 12 Pablo Carreno Busta of Spain vs. No. 28 Kevin Anderson of South Africa.

"Well, I think it's my home court, too," del Potro said in an on-court interview.

The 2-hour, 51-minute contest was filled with some sublime shotmaking by each player, and some real moments of shakiness for the 36-year-old Federer, whose forehand in particular was problematic. The turning point was the third-set tiebreaker, which Federer was a single point from winning on four occasions.

At 6-4, del Potro hammered a good return that caught Federer off-guard, resulting in a forehand into the net. At 6-5, del Potro delivered a service winner. At 7-6 — set up by a double-fault from del Potro — Federer missed a backhand, and his wife, Mirka, put her hands to her temples, before standing to offer encouragement. At 8-7, Federer's fourth and last set point, del Potro hit a huge forehand winner.

That began a run of three points in a row for del Potro to claim that set, the last when Federer pushed a backhand volley long.

The suspense in the fourth set was brief: At 2-all, Federer dumped an overhead into the bottom of the net to gift a third break point of the game, which del Potro converted with a stinging cross-court backhand return winner to nose ahead for good.

"I did everything well. I served so good. I hit my forehand as hard as I can," del Potro said. "And I think we played a great match and I deserved to win at the end."

Del Potro showed no ill effects from his 3 1/2-hour, five-set comeback victory in the fourth round — or the illness that's been bothering him. His forehands were powerful and precise, including one reflex pass hit so hard and so close to Federer's head that he ducked out of the way.

Federer was uncharacteristically off at moments, including a very bad forehand volley that was way off the mark and set up del Potro's match point.

"It was one of those matches where, if I ran into a good guy, I was going to lose, I felt. I don't want to say I was in a negative mindset, but I knew going in that I'm not in a safe place," Federer said. "Rightfully so, I'm out of this tournament, because I wasn't good enough — in my mind, in my body, and in my game. ... If you're missing all three, it's going to be tough." 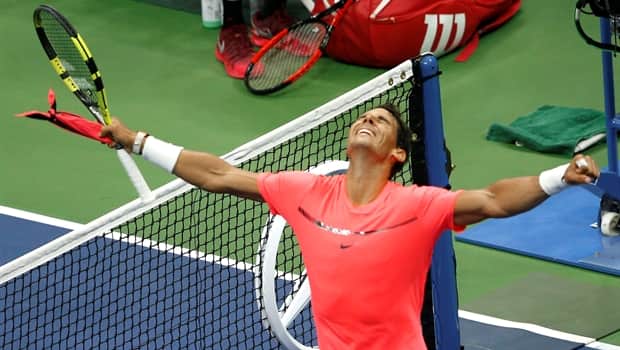 The top-seeded Nadal wrapped up the rout in just over 90 minutes.

This is the sixth time at the U.S. Open that Nadal and Federer have each been one victory away from a matchup of the men who own the most Grand Slam titles.

"It's something a little bit strange that we never played here, because we played a lot of times in all the important events around the world," Nadal said in an interview on the court.

Rublev was the youngest U.S. Open quarter-finalist since Andy Roddick was also 19 in 2001 but he didn't give himself much chance, committing 43 unforced errors and seven double faults.

"This match told me how far I am and how much I need to improve, so now is time to try to be better and become stronger," Rublev said.

The 20th-seeded Vandeweghe matched her best result in a Grand Slam tournament, having also reached the semifinals of the Australian Open in January before falling to Venus Williams. Vandeweghe raced to a 3-0 lead in the first-set tiebreaker, then got an early break in the second set on her way to 3-1 lead, frustrating last year's runner-up with her powerful shots.

Pliskova, who lost to Angelique Kerber in the 2016 final, needed to get back to the final to remain atop the WTA rankings. She will be replaced on Monday by Wimbledon champion Garbine Muguruza, who lost in the fourth round.

"I think I had quite high expectations, and obviously I knew I had quite an OK draw, so there was nobody, like, unbeatable for me," Pliskova said. "Even this match today was not without chance, so maybe I put too much expectation on myself."

Vandeweghe comes from a decorated athletic family and is finally making a name of her own this year.

Nine years after winning the U.S. Open junior title, she finally got past a major quarter-final in Australia, then needed only eight months to do it again.

Her grandfather, Ernie, and uncle, Kiki, both played in the NBA, and her mother, Tauna, represented the U.S. in both swimming and volleyball at the Olympics. CoCo dropped to her knees and looked upward after match point, saying afterward she was thinking of her family.

"I think what really was going through my mind in that moment was I'm a big believer that my grandparents are still with me," she said. "It was more just looking up and feeling the love of everything that was going on."

Madison Keys has made it an all-American women's final four at the U.S. Open.

The No. 15 seed beat Kaia Kanepi 6-3, 6-3 to reach the semifinals of a Grand Slam tournament for the second time.

She will face No. 20 CoCo Vandeweghe on Thursday night in the second semifinal, after ninth-seeded Venus Williams faces unseeded Sloane Stephens. 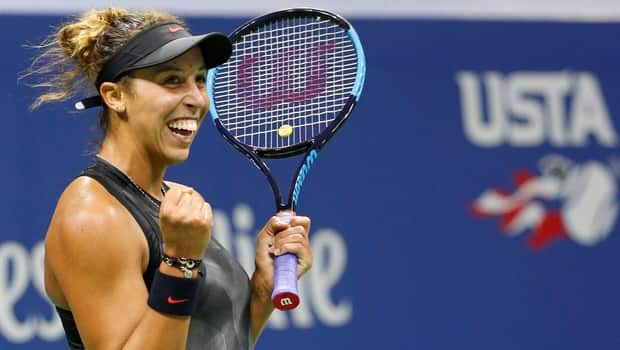 The Americans hadn't had all four semifinalists at the U.S. Open since 1981, when Tracy Austin beat Martina Navratilova for the title. Chris Evert and Barbara Potter also made the semifinals.

The last time it happened at any Grand Slam tournament was at Wimbledon in 1985, with Navratilova and Evert joined by Zina Garrison and Kathy Rinaldi.

The U.S. Open is guaranteed its first all-American final since Serena Williams beat Venus in 2002.

Keys, 22, had a rough start to 2017, missing the first two months after off-season surgery on her left wrist, and then had another procedure in June because of lingering pain. She was terrific against Kanepi, who sat with a white towel over her head during changeovers and dropped to 0-6 in Grand Slam quarter-finals.

"This means the world to me," said Keys, also a semifinalist at the 2015 Australian Open. "If someone told me this is where I would be, right before Wimbledon, I wouldn't have believed you."

In women's doubles action, Canada's Gabriela Dabrowski and her partner Yifan Xu fell to the third-seeded team of Lucie Safarova and Barbora Strycova 6-3, 2-6, 6-4 in their quarter-final match.