Tennis shutdown, pause on life 'straight out of a movie,' Pospisil says

With Wimbledon cancelled for the first time since World War II because of the coronavirus pandemic, Canada's Vasek Pospisil says he would be thrilled if his next tennis match occurred in August at the Rogers Cup.

With Wimbledon cancelled for the first time since World War II, Vasek Pospisil says he would be thrilled if his next tennis match occurred in August at the Rogers Cup in Toronto.

"In my mind that's the best-case scenario," the Vancouver resident told CBC Sports, referring to the coronavirus pandemic that has shut down the sports world.

"There are so many unknowns (about the virus) and variables in play that it's almost better to do what you can every day to help the community, help the cause and stop the spread of the virus. I'm not too stressed about timelines."

Pospisil was in California preparing for the BNP Paribas Open when the tournament at Indian Wells was cancelled on March 8 over COVID-19 concerns. Four days later, the men's ATP Tour and the WTA, which runs the women's circuit, suspended tournaments until June 7. On Wednesday, the suspension was extended until at least July 13.

Rogers Cup organizers are "optimistic" the women's and men's tournaments will be played in Montreal and Toronto, respectively, while Tennis Australia chief executive Craig Tiley told The Sydney Morning Herald and The Age it would be tough for tennis to return in 2020.

While it is not inconceivable to imagine the season being lost, as Pospisil said, the 2014 Wimbledon doubles champion believes it would be premature to call off the season now.

I never thought I would live through something like this. ... It's a terrible tragedy as lives are being lost.— Canadian tennis player Vasek Pospisil on the coronavirus pandemic

"I'm generally optimistic and things could change quickly. Maybe a new vaccine comes out tomorrow," the world's 93rd-ranked player said. "Even if you do have a slow-down, the new case count would have to stop completely to consider taking the risk of opening borders and even then there would be a period of caution."

Being away from the court has reminded Pospisil of the first six months of 2019 when he was mainly at home following back surgery.

"This is also tough," he said of the coronavirus. "I can't go out and haven't seen my parents or my brothers.

"I never thought I would live through something like this; that life would be a complete pause. It's straight out of a movie. It's a strange time and terrible tragedy as lives are being lost."

Pospisil is prepared for an extended break, agreeing with Tiley that tennis probably would be the last professional sport to resume play, given its reliance on global travel. 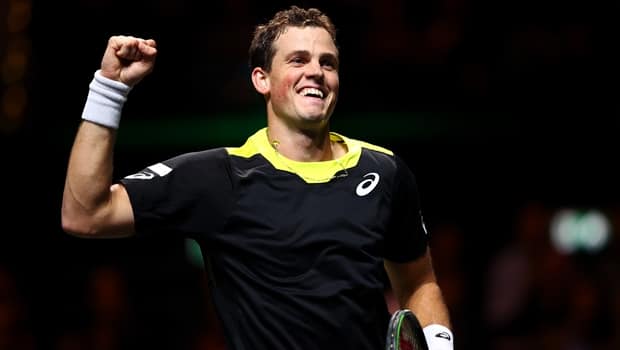 1 year ago
0:52
Vancouver's Vasek Pospisil upset world No. 5 player Daniil Medvedev 6-4, 6-3, in the first round of the ABN Amro World Tennis Tournament in Rotterdam, Netherlands. 0:52

Tennis was put on hold with Pospisil sporting an 8-5 record in ATP tournaments in the first months of his 14th season. He also played for his first tour title since 2014 at the Open Sud de France after winning two lower-tier events last fall that preceded a strong performance in November at the Davis Cup Finals in Madrid.

"I achieved a level of consistency that maybe I hadn't prior in my career," said Pospisil, who cracked the top 25 in the world rankings in 2014. "The way I was performing and feeling pain- and injury-free, I was moving extremely well."

More significant to Pospisil was experiencing "a little bit of a rebirth" mentally. Having felt ambitious for some time, recovering from surgery allowed Pospisil to find more balance in his life, invest in a tech company and real estate, while spending more time with family.

"It gave me confidence (looking at) my life after tennis," Pospisil said. "I'm involved in a start-up company as one of the co-founders. We're launching soon and I won't mention what it is, but it's not sports-related, completely.

"Coming back on the court, I was putting a lot less pressure on myself and importance on any particular match.

"I (also) found a great balance in my social life that I hadn't had prior to the injury," Pospisil added. "Maybe I underestimated the importance of the social part of life — seeing family, friends, taking time off. I'm a bit of a workaholic and maybe I was over-the-top. Now, I take a few days off, relax, see my friends and have a couple of drinks when it's time."

Pospisil also keeps in close contact with friend and teammate Felix Auger-Aliassime "mostly joking around, sending memes." And since he's unable to visit his mom for dinner, the self-described "horrible" cook is also ordering more takeout and delivery.

"I don't get tired of eating one thing over and over," he said. "I'm a big oatmeal guy. I can eat it almost twice a day every day."