Canada's Milos Raonic advanced to the semifinals of the Paris Masters tennis Friday with a nervy 6-3, 3-6, 7-6 (7) win over France's Ugo Humbert.

Canada's Milos Raonic advanced to the semifinals of the Paris Masters tennis tournament Friday with a nervy 6-3, 3-6, 7-6 (7) win over France's Ugo Humbert.

Raonic, the 10th seed from Thornhill, Ont., once again used his big serve and the indoor hardcourt environment to his advantage, winning 75 per cent of service points. He won hos second match point with his 25th ace.

Humbert carried a string of impressive results in Paris into the contest, including wins over French Open semifinalist Stefanos Tsitsipas and former U.S. Open champion Marin Cilic. And the 22-year-old Frenchman gave Raonic all he could handle in a match that took over two hours 18 minutes to decide.

After each player comfortably won a set, Raonic fended off three break points to take the opening game of Set 3. But Raonic was unable to press the early advantage, with Humbert saving two break points to tie the set 1-1. 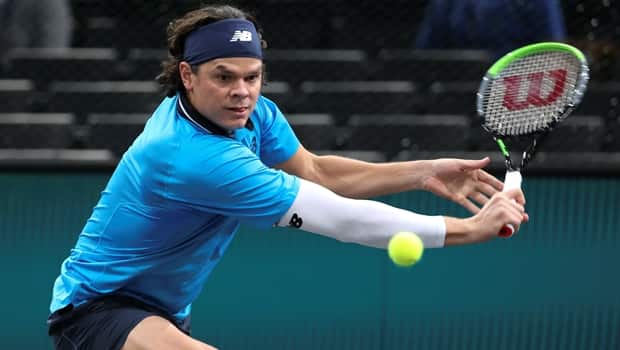 Both players then held serve until a nail-biting tiebreak.

Humbert led 5-1 in the tiebreaker and earned match point when Raonic's forehand went long. But Raonic held his nerve to save it with a forehand winner at the net following a long rally, and saved the second match point with a strong serve that Humbert patted into the net.

After Humbert saved match point at 7-6, he fluffed a routine backhand down the line to make it 8-7 to Raonic, who let out a loud shout after an ace.

Raonic, ranked 17th in the world, will have a chance to make his second appearance in Paris Masters final when he faces Daniil Medvedev in the semifinals. Medvedev, the world No. 5 from Russia defeated Argentina's Diego Schwartzman 6-3, 6-1.

Medvedev is 2-0 against Raonic, with both victories coming at hardcourt events.

Raonic advanced to the Paris Masters final in 2014 before losing in straight sets to Serbian star Novak Djokivic.

Nadal has never won the tournament in Paris and lost his only final 13 years ago. The top-seeded Spaniard next plays Alexander Zverev, who beat three-time Grand Slam champion Stan Wawrinka 6-3, 7-6 (1) for a fourth straight win against the Swiss veteran.

Zverev has lost five of six matches against Nadal, although the fourth-seeded German's one success was in straight sets at last year's ATP Finals.

Nadal's victory also ensured Schwartzman the last slot at those finals, and at his rival Carreno Busta's expense. Schwartzman advanced to the finals in London from Nov. 15-22, despite losing to Medvedev.

Carreno Busta is a confidence-crushing 0-7 overall against Nadal, but there might be a good reason why he's never beaten him.

He looked in control against a jaded-looking Nadal after conceding only five points on his serve in the first set.

"The problem was he was winning his serves too comfortably, I was not able to return enough well," Nadal said. "I need to return better if I want to have chances to keep going."

But Carreno Busta let Nadal off the hook by playing loose shots after having him 0-40 on his serve at the start of the second set.

The sloppy reprieve galvanized the 20-time Grand Slam champion into stepping up his game.

Nadal secured his first break of the match in the 12th game to avoid a hazardous tiebreaker, and took command after breaking his opponent to love for a 3-1 lead in the decider.

Wawrinka, meanwhile, served for the second set at 5-4 before wilting in the tiebreaker.

"I didn't stay calm when I could have, that's why I lost," Wawrinka said. "I hurried a few points here and there."

Earlier, the 2019 U.S. Open runner-up Medvedev was first on court and off just one hour later following a brutal display of ball striking against Schwartzman.

"The level today was really good, so that's a level I want to be all the time," he said. "But it's impossible in tennis."

The big-hitting Russian did not face a break point and was near perfect on first serve winning 27 of 28 points. He was clinical, too, breaking Schwartzman twice in each set.

"Against Daniil, you have to put every single point, 15, 20 balls, not trying to do winners quickly," said Schwartzman, who has lost all four career matches against him. "I didn't have the patience to do it today."