'If I ever say farewell, I wouldn't tell anyone,' says 39-year-old on playing future

As Serena Williams walked off the court after her latest so-close-yet-so-far bid for a 24th Grand Slam title ended with a loss to Naomi Osaka at the Australian Open, the 39-year-old American paused and put her hand on her chest as thousands of spectators rose to applaud.

Was this, Williams was asked at a news conference after the 6-3, 6-4 semifinal defeat, her way of saying goodbye?

"If I ever say farewell," she replied with a smile, "I wouldn't tell anyone."

When the next question returned the conversation to the subject of Williams' many mistakes Thursday (Wednesday night EST) — twice as many unforced errors, 24, as winners, 12 — she shook her head, teared up, said, "I'm done," and abruptly ended the session with reporters.

Once again, Serena Williams came within reach of a record-tying 24th Grand Slam singles title, playing well enough to get to the closing days of a major tournament.

Osaka, who also beat Williams in the chaotic 2018 U.S. Open final, reached her fourth major title match and stretched her winning streak to 20 matches by claiming the last eight points.

"I don't know if there's any little kids out here today, but I was a little kid watching her play," Osaka, 23, said about Williams, 39, "and just to be on the court playing against her, for me, is a dream."

The No. 3-seeded Osaka's Grand Slam collection also includes last year's U.S. Open and the 2019 Australian Open and she is, without a doubt, the most dangerous hard-court player in the women's game at the moment.

That used to be Williams, of course. But she was off-target too much in this contest, finishing with twice as many unforced errors, 24, as winners, 12. 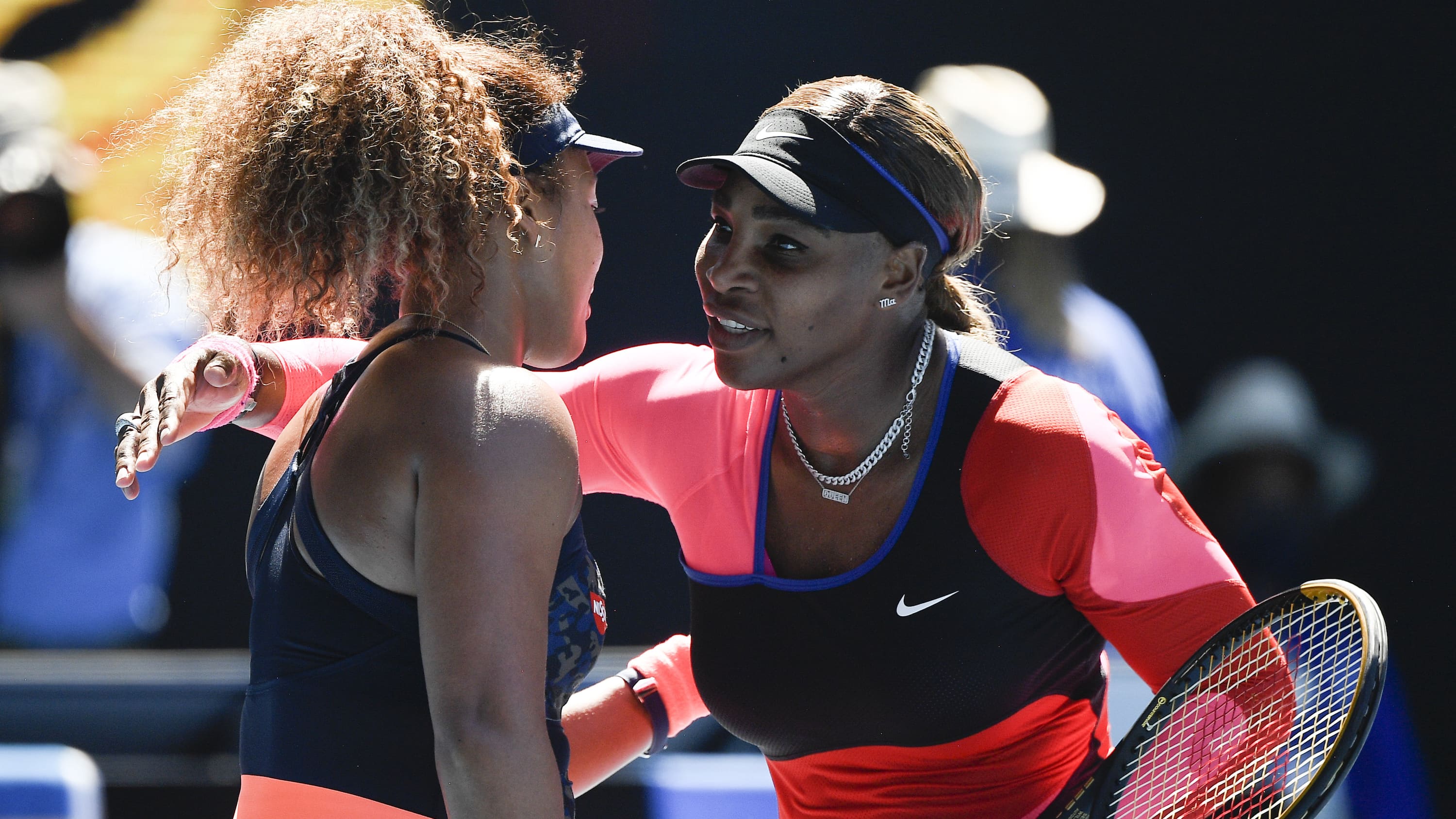 After collecting her professional era-record 23rd major singles trophy at the Melbourne Park in 2017 while pregnant, Williams has not been able to pull even with Margaret Court's mark of 24 for the most Grand Slam titles in history.

Since returning to the tour in 2018 after having her daughter, Williams has reached four major finals and lost them all. She's also now lost in the semifinals twice in that span.

On Saturday, at 7:30 p.m. local time (3:30 a.m. EST), Osaka will meet first-time Grand Slam finalist Jennifer Brady of the United States for the championship. The 22nd-seeded Brady, who is from Pennsylvania and played college tennis at UCLA, prevailed in an epic, 18-point last game to edge No. 25 Karolina Muchova 6-4, 3-6, 6-4 in the semifinals.

Brady dropped to her back at the baseline after saving a trio of break points, then converting her fifth match point when Muchova sent a forehand long.

"My legs are shaking," Brady said. "My heart is racing."

She lost to Osaka in a three-set thriller in the U.S. Open semifinals last September.

"Everyone's just really excited whenever they play their first final," Osaka noted about what awaits Brady, "but they're also really nervous."

Novak Djokovic kept his record perfect in semifinals at Melbourne Park, improving to 9-0 with a 6-3, 6-4, 6-2 win late Thursday over Aslan Karatsev, a Russian qualifier who was ranked No. 114 and making his debut in a major. 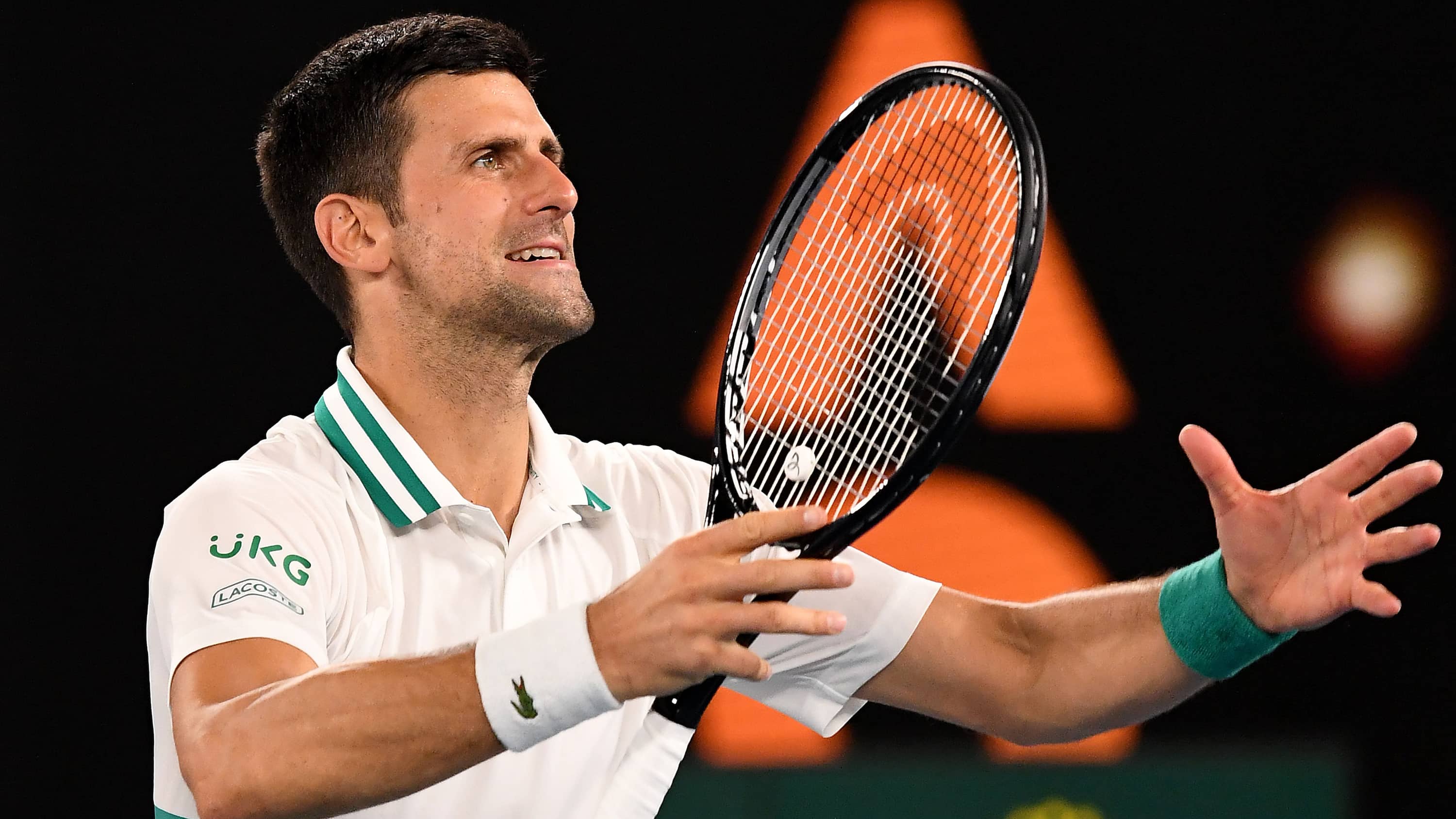 Daniil Medvedev and Stefanos Tsitsipas will meet in the other men's semifinal on Friday.

Rafael Nadal — who lost in the quarter-finals to Stefanos Tsitsipas after blowing a two-set lead — and Roger Federer are tied for the men's record of 20.

Spectators were back in the stands at Rod Laver Arena on Thursday after they were barred from attending the tournament for five days during a local COVID-19 lockdown. About 7,000 people were allowed into the stadium for Williams-Osaka, roughly half of capacity.

Ushers walked through the aisles at changeovers to remind fans they needed to wear a mask or over their nose and mouth.

On the hottest day of the hard-court tournament so far — 85 degrees Fahrenheit (30 Celsius) — Osaka got out to a shaky start, perhaps prodded into pressing in her opening service game by a booming cross-court backhand return winner from Williams on the match's second point.

That was followed by a double-fault, a wild forehand and, eventually, a netted backhand that handed over a break. Quickly, Williams went up 2-0, then held another break point with a chance to lead 3-0 after another double-fault by Osaka.

"I was just really, like, nervous and scared, I think, at the beginning," said Osaka, who was born in Japan and moved to the U.S. when she was 3. "And then I sort of eased my way into it."

Didn't take long to right herself, however.

Suddenly, it was Osaka powering in aces, putting groundstrokes right where she wanted, covering the court so well. Williams' movement has been terrific in Melbourne, but she suddenly was flat-footed, her miscues accumulating precipitously.

Five games went by in a flash, all into Osaka's column, and soon enough, the first set belonged to her, too.

Williams' frustration was made plain early in the second set, when she leaned over at the baseline and screamed, "Make a shot! Make a shot!"

Osaka never has tried to hide how much she admires Williams and models her game after the American's.

Both are predicated on the same basic elements of big serves and quick-strike forehands, and not only did Osaka do both better on this day, she even sounded just like her idol, screaming "Come on!" after several key shots.

Williams herself began to get louder and increasingly animated the deeper into the second set they went — and plenty of folks on hand were excited to show their support, clapping and yelling after each successful stroke.

Those pulling for Williams got their wish: Osaka blinked.

A trio of double-faults in one game — she wound up with eight for the match — allowed Williams to break for 4-all.

But Osaka regained her composure immediately, breaking back at love with the help of a pair of backhand winners and a double-fault from Williams, then holding at love to end it.