Rafael Nadal's bid for a men's-record 21st Grand Slam title has ended with a five-set loss to Stefanos Tsitsipas in the Australian Open quarter-finals.

For the 225th time in his illustrious career, Rafael Nadal grabbed a two-set lead in a Grand Slam match. For only the second time, he blew that big edge and lost.

A couple of uncharacteristically sloppy overheads and a framed backhand in a third-set tiebreaker began Nadal's undoing, and his bid for a men's-record 21st major championship eventually ended in the Australian Open quarterfinals Wednesday with 3-6, 2-6, 7-6 (4), 6-4, 7-5 loss to Stefanos Tsitsipas.

"I have to go back home," Nadal said, "and practise to be better."

At his put-the-ball-where-he-wants-it best in the early going, Nadal went ahead rather easily, winning 27 consecutive points on his serve in one stretch and running his streak of consecutive sets won at major tournaments to 35, one shy of Roger Federer's record for the professional era.

WATCH | Nadal upset in quarter-finals in the Australian Open: 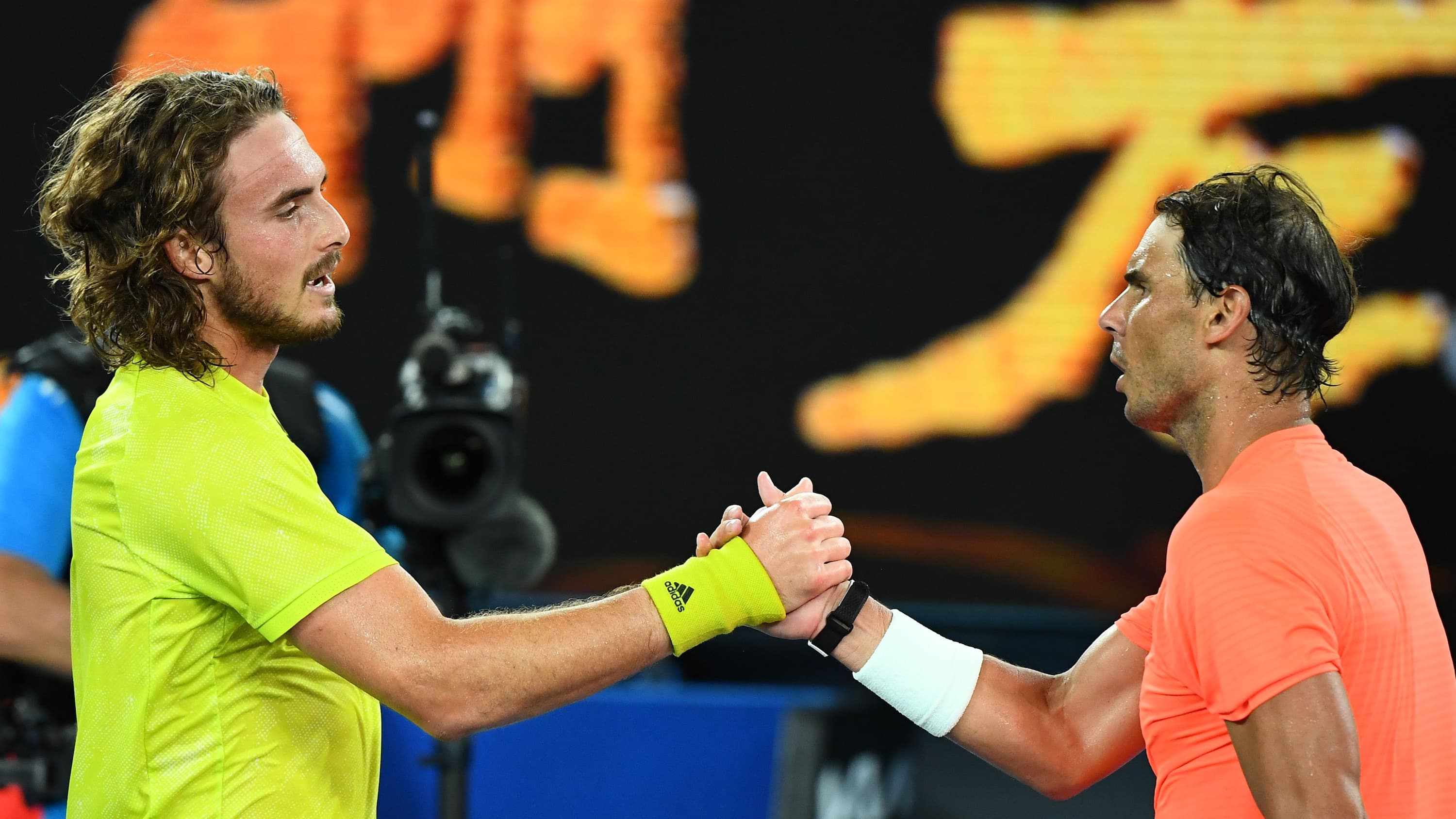 Tsitsipas rallies to upset Nadal in the Australian Open quarter-finals

Nadal and Federer are currently tied at 20 Grand Slam singles titles, more than any other man in the history of a sport that dates to the late 1800s.

But Tsitsipas never wavered and that surprisingly poor tiebreaker by Nadal — thinking too far ahead, perhaps? — helped hand over the third set and begin the epic comeback.

"I started very nervous, I won't lie," the fifth-seeded Tsitsipas said. "But I don't know what happened after the third set. I just flied like a little bird. Everything was working for me. The emotions at the very end are indescribable."

Nadal made a total of only 10 unforced errors in the first two sets combined, then had 11 in the third, 14 in the fourth and seven in the fifth.

The only other occasion in which Nadal went from a two-set advantage to a defeat in a Slam came at the 2015 U.S. Open against Fabio Fognini (who just so happened to have lost to Nadal in the fourth round at Melbourne Park this year).

So now, instead of Nadal attempting to continue his pursuit of Federer, it will be Tsitsipas — a 22-year-old from Greece with a flashy game — who will meet 2019 U.S. Open runner-up Daniil Medvedev in the semifinals Friday.

Neither Tsitsipas nor Medvedev has won a Grand Slam tournament.

In the other men's semifinal, 17-time major champion and No. 1-ranked Novak Djokovic will face 114th-ranked qualifier Aslan Karatsev, who is making his Grand Slam debut.

On the women's side, top-ranked Ash Barty built a big lead in her quarter-final match before her opponent took a medical timeout and left the court. More than an hour later, it was Barty heading abruptly through the exit. She was upset Wednesday by Karolina Muchova, 1-6, 6-3, 6-2.

Muchova will now play Jennifer Brady in one semifinal Wednesday night, with the marquee matchup of Serena Williams vs. Naomi Osaka in the other. 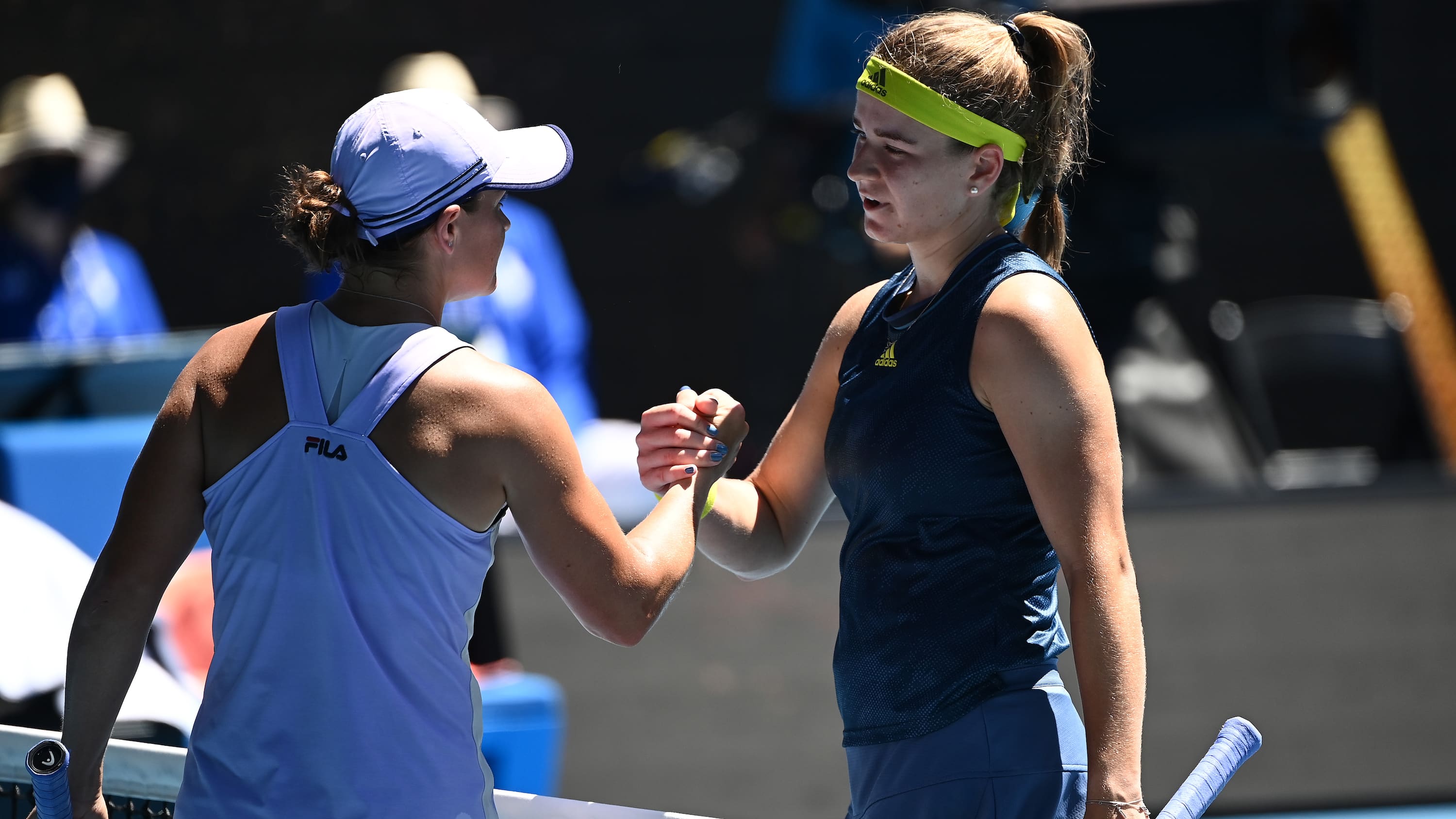 Nadal won the 2009 Australian Open, but it is the only major he hasn't won at least twice, with 13 at Roland Garros, four at the U.S. Open and two at Wimbledon.

He came into this year's first major with doubts about his back, citing that as his reason for pulling out of the ATP Cup team competition that preceded the Australian Open and saying the problem prevented him from practicing properly for about three weeks.

But Nadal said after the loss to Tsitsipas that his back was not an issue.

Seeded No. 25, Muchova earned her first semifinal berth in a Grand Slam. Her comeback win ended Barty's bid to become the first Australian woman to win the title in Melbourne since Chris O'Neil in 1978.

"It's heartbreaking, of course," Barty said. "But the sun will come up tomorrow. You're either winning or you're learning, and today is a massive learning curve for me."

"I hope I make it a habit," she said. "Hopefully I have a new habit of making finals."

Seeded 22nd, Brady struggled at times and gave her racket an angry toss midway through the second set. The unseeded Pegula, who advanced beyond the third round at a major for the first time, appeared to tire down the stretch.

"We're such good friends," Brady said. "I'm really happy for her success. I know we'll be having a lot more tough battles."

Muchova played poorly at the start of her second major quarter-final, and Barty raced to a 5-0 lead while losing only six points. After nine games, Muchova had one winner and 18 unforced errors, and early in the second set, she took a medical timeout that lasted nearly 10 minutes.

Sunny weather, with the temperature in the mid-80s (30 degrees Celsius), was a factor, Muchova said.

"I think it was a bit of the heat," she said. "It got to me, and I was feeling kind of dizzy, really lost and almost fainting. I just asked for help."

Medical personnel took her temperature, checked her blood pressure and gave her ice before she left the court. When the Czech returned, she played much better.

"I tried to play a bit faster rallies so we don't play long ones as in the first set," Muchova said, "and it worked well."

Barty had no complaints about Muchova halting play.

"It's within the rules," Barty said. "She's within her rights to take that time. That shouldn't be a massive turning point in the match. I'm disappointed I let that be a turning point." 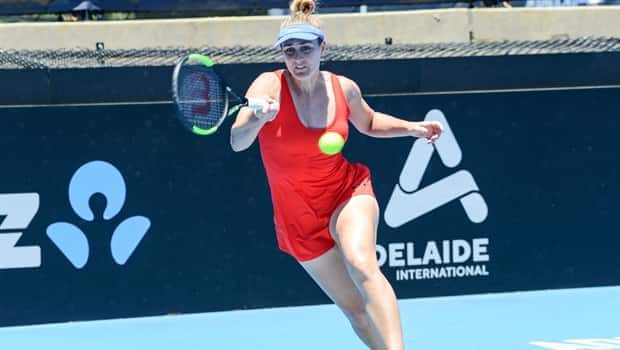 The Australian Open will be able to open its gates to fans for the last four days of the tournament after the state of Victoria announced that a snap coronavirus lockdown would be lifted at midnight on Wednesday.

Victoria State Premier Dan Andrews announced the lifting of the lockdown but said the crowds allowed into Melbourne Park for the semi-finals and finals of the Grand Slam might be reduced from the originally agreed 25,000 a day.

"There will be meeting early this afternoon ... where we go through and work through exactly what is a safe number and that decision will be made as soon as possible," Andrews told reporters.

"They were already reduced, they may have to be reduced a little bit further, but that matter will be resolved in the next few hours."

Tournament organizers said they expected crowds would be back on Thursday and would make a full statement later on Wednesday after the details were worked out.

Fans were shut out of the precincts of Melbourne Park from last Saturday after a small outbreak in the city of the COVID-19 variant associated with Britain. The state reported no locally acquired coronavirus cases on Wednesday.

Tournament organizers will be desperate for fans to return after spending a huge amount of money to get the tournament up and running, including some A$40 million ($31 million) on putting players through 14 days of quarantine.

Tickets were already available for purchase online on Wednesday morning ahead of the government's announcement, with some seats for Sunday's men's final at Rod Laver Arena still available at A$550 each.

"I assume people have bought those tickets, they assume there would be some risk involved in that given that I have only made these announcements now," Andrews added.