The sight of chair umpires ambling down to decide on close line calls at Roland Garros could be a thing of the past from the next edition with growing clamor among players for the introduction of electronic line-calling on clay courts.

The sight of chair umpires ambling down to decide on close line calls at Roland Garros could be a thing of the past from the next edition with growing clamor among players for the introduction of electronic line-calling on clay courts.

The French Open is the only one among the four tennis Grand Slams that does not use HawkEye ball-tracking system, instead leaving the umpires to take final decisions based on marks left by the ball on the red clay.

The issue has dominated news conferences and discussions on social media platforms after Denis Shapovalov found himself on the receiving end of a seemingly wrong call by the umpire on a crucial point during his second-round loss on Thursday.

The French Open organizers did not respond to request from comment from Reuters. 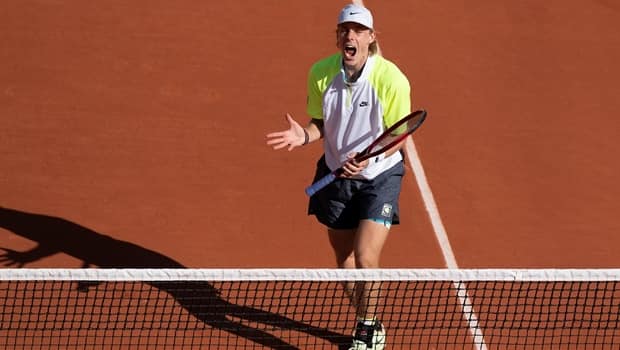 Serving for victory at 5-4 in the fifth set against Spaniard Roberto Carballes Baena, the Canadian ninth seed was up 30-15, when a ball, which seemed to have landed outside the line, was ruled to be in by the umpire.

Shapovalov vented his frustration in a Twitter post, accompanied with a screengrab showing the ball had landed outside the line, asking: "When will we have Hawkeye on clay?."

He found support from his fellow players, including U.S. Open champion Dominic Thiem, whose match against Casper Ruud was also blighted by couple of uncertain calls.

"I would support 100 per cent HawkEye on clay, because at the match from Denis against Roberto yesterday there was a mistake, and then today in my match there was a mistake in my favour actually," world number three Thiem told reporters.

"Casper showed me the mark on his phone after the match. It's not the umpire's mistake, because sometimes you just cannot see the mark. It's too difficult, especially after the set break, because they clean the court, they brush the lines.

"I think it would be fair for everybody if HawkEye would also exist on clay. We should make it happen ... I hope that next year we will have it in every clay court tournament."

'It's time for HawkEye on clay'

Greek Stefanos Tsitsipas agreed that he would rather depend on technology.

"I think it's time for HawkEye on clay. I don't understand why they haven't proceeded," said the world number six.

"But if technology allows us to do far beyond more things that current knowledge allows us, I do believe they should implement that into tennis. Doesn't really matter the surface.

"That's innovation, and we have to keep growing and keep adding new things to the sport that will help make the sport better and more fair."

Ruud's points against Thiem were not as crucial as Shapovalov but the Norwegian could relate to the Canadian's frustrations.

"I think it's a bit strange that they have the HawkEye available here but they only show it for TV and I don't understand why we can't use it," Ruud said.

"I think definitely ... we should start using HawkEye for the clay court tournaments as well because then we don't need to have all these arguments with umpires."