Top-seeded Simona Halep became the first semifinalist at the Italian Open when Kazakh opponent Yulia Putintseva retired midway through their match due to a lower back injury Saturday.

Top seed is 8-0 since tennis restart

Top-seeded Simona Halep became the first semifinalist at the Italian Open when Kazakh opponent Yulia Putintseva retired midway through their match due to a lower back injury Saturday.

"(Muguruza) feels really well on (the) clay court and here," Halep said. "It's a big challenge.

"I really want to win this tournament," added Halep, who will be playing her fifth semifinal in Rome. "I love playing here. ... It's one of the biggest goals now."

WATCH | Halep on a roll since tennis restart: 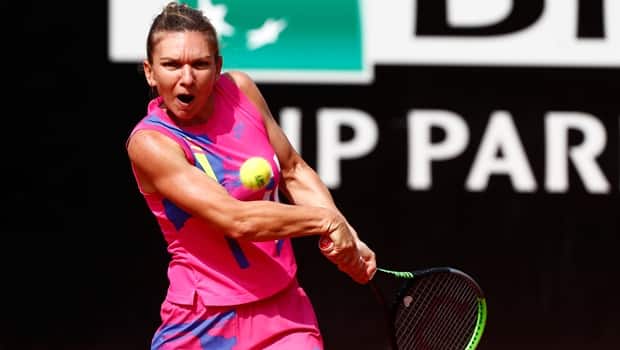 1 month ago
1:05
World No. 2 Simona Halep moves on to the Italian Open semifinals when Yulia Putintseva retires midway through their match due to a lower back injury. 1:05

Halep was ahead 6-2, 2-0 when Putintseva decided she was in too much pain to continue — having already taken an off-court medical timeout between sets.

The 30th-ranked Putintseva was coming off two long three-set matches, having upset eighth-seeded Petra Martic and 10th-seeded Elena Rybakina. Entering the match, she had been on court for 7 hours, 22 minutes — far more than Halep, who had a bye in the opening round and won her next two matches in straight sets.

Putintseva also reached the U.S. Open quarterfinals in her previous tournament, while Halep decided to skip the event in New York due to coronavirus travel concerns.

Halep improved to 8-0 since the tennis restart and 12-0 overall stretching back to February.

The other women's semifinal will be an all Czech Republic affair between No. 2 seed Karolina Pliskova and No. 12 seed Marketa Vondrousova.