Mixed results on clay for Canadians

The 14th-ranked righty from Thornhill, Ont., will face Italy's Marco Cecchinato in the second round of the clay-court tournament on Wednesday. 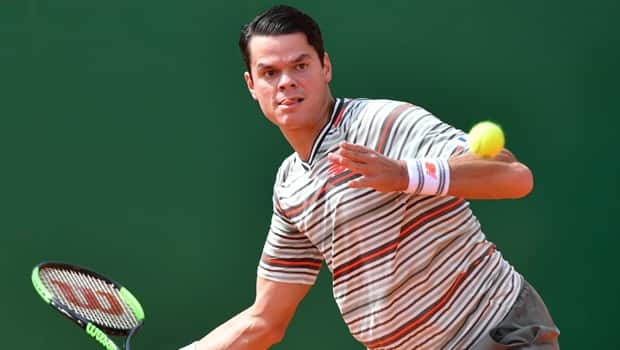 3 years ago
1:13
Raonic topped Monaco's Lucas Catarina to make the round of 32. Shapovalov then fell in straight sets to Stefanos Tsitsipas of Greece. 1:13

Two-time champion Novak Djokovic reached the second round with a 6-0, 6-1 win over Dusan Lajovic on Monday.

The ninth-seeded Serb won in only 57 minutes despite having to save break points in three consecutive service games in the second set, including two when serving for the match.

Djokovic won on his first match point when Lajovic swiped a forehand wide. He then whipped off his hat, tilted his head back and raised his hands in triumph.

The former-top ranked Djokovic has been troubled by a persistent right elbow injury and his ranking has tumbled to No. 13. Earlier this month, he stopped working with Andre Agassi and Radek Stepanek — the latest in a series of coaching changes for the 12-time major champion. He has not won a Grand Slam tournament since the 2016 French Open.

"I've had a very difficult time in the last 12 months with the injury and everything else that's happened," Djokovic said. "I'm lacking matches and a bit of confidence on court. But I'm looking ahead."

Kei Nishikori reached the second round by beating Tomas Berdych 4-6, 6-2, 6-1. He broke the 12th-seeded Czech's serve six times and dropped his own twice.

Nishikori, like Djokovic, needs time on court after only recently returning from a torn tendon in his right wrist. That injury had ruled him out of last year's U.S. Open and this year's Australian Open.

The Japanese player, ranked 36th, came back in late February when he lost to Denis Shapovalov in the first round of the Mexico Open. He then reached the third round of the Miami Masters last month, losing to Juan Martin del Potro.

"It's not great but first match on clay, I'm expecting [a] little soreness," Nishikori said. "Hope I get more confidence and do well [at] these five tournaments on clay."

Ramos-Vinolas, who lost in last year's final, beat Jared Donaldson 6-3, 6-3. Donaldson ranted at the chair umpire over a line call and then squared up to him as he continued to argue. The 21-year-old American received a code violation.