Canada's Milos Raonic advanced to the quarter-finals at the Rogers Cup on Thursday with a 6-3, 4-6, 6-4 victory over Julien Benneteau of France.

Djokovic bounced by Tsonga, Federer through 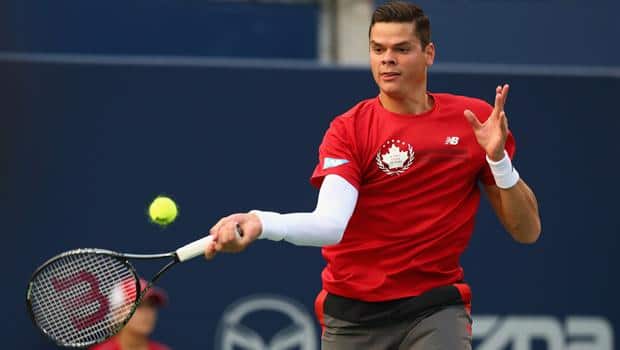 Canada's Milos Raonic strolled into the post-match interview room at Rexall Centre and immediately looked over at the television monitor beside his seat.

He watched the screen intently as Roger Federer and Marin Cilic squared off on the stadium court before sitting down to discuss his 6-3, 4-6, 6-4 victory over Julien Benneteau at the Rogers Cup.

Raonic will next meet Feliciano Lopez in the quarter-finals but the possibility of another semifinal showdown with Federer — just a month after they met in the final four at Wimbledon — has Canadian tennis fans drooling.

So, is a potential rematch with the Swiss star in the back of his mind?

"No, I just enjoy to watch tennis," Raonic said with a grin.

Federer ended Raonic's run at the All England Club before losing to Novak Djokovic in the final. It was a career-best performance at the Grand Slam event for the 23-year-old Canadian, but his performance against Federer left him disappointed and frustrated.

Raonic responded last week by winning in Washington and he has maintained the momentum this week, although he has been tested in both of his matches. The No. 6 seed from Thornhill, Ont., barely got by American Jack Sock in his opener before getting another stiff challenge from Benneteau on Thursday night.

The hard-serving Raonic controlled the early pace with his powerful ground strokes but the Frenchman picked up two breaks in the second set to pull even. Raonic broke Benneteau at love to open the third set and was never threatened after that.

"Today I was (in) much more (of) a comfort zone — created my opportunities," Raonic said.

It was a day of upsets at the US$3.78-million Masters 1000 series tournament as three of the top four seeds were eliminated.

South Africa's Kevin Anderson got things started in the morning by knocking off No. 3 Stan Wawrinka of Switzerland 7-6 (8), 7-5 and No. 13 Jo-Wilfried Tsonga of France followed with a 6-2, 6-2 win over top-seeded Novak Djokovic of Serbia.

With a near-capacity crowd cheering him on, Raonic had little trouble in the opening set. He was pushed to deuce at one point but a volley winner and 221-km/h service winner gave him the hold and a 4-3 lead.

In the following game, Raonic landed a scorching forehand in the corner to set up a break point and took the game when Benneteau made an unforced error. He closed out the set when the ball struck the net tape and softly landed on Benneteau's side.

Benneteau appeared to get more of a read on Raonic's serve in the second set but he couldn't match up in the third. The Frenchman fought off three match points in the penultimate game before Raonic closed things out in one hour 47 minutes.

Earlier, Djokovic was unable to settle into his usual rhythm and it proved costly against Tsonga, who needed only 63 minutes to complete the straight-sets victory.

"Just nothing was going," Djokovic said. "No baseline, no serve, no return. So (it was) just generally (a) very bad day, very poor performance. (I) couldn't do much."

Tsonga had eight aces and Djokovic continually struggled to keep his service returns in bounds. Tsonga closed out the victory when Djokovic returned a serve wide.

A visibly elated Tsonga did some shadow boxing and jumped up and down before waving to the receptive crowd.

"It's not every day you get the rewards of what you're doing every day during the year," he said. "You leave your family, practise every day hard, suffer a lot on the court. And when you win a match like this, you just feel good."

Djokovic barely got by Gael Monfils of France a day earlier, needing a third-set tiebreaker to avoid a loss in his tournament opener. He came into Thursday's match with 11 straight wins over Tsonga, but was nowhere near adding a 12th.

The three-time Rogers Cup champ said he didn't feel comfortable in either match on the fast hardcourt.

"I wasn't hitting the ball clean and a lot of unforced errors," Djokovic said. "It's maybe (a) lack of matches on this surface and well, it takes time. Let's just say it's going to be better, I'm sure."

Tsonga will play No. 8 Andy Murray of Britain in the quarter-finals. Murray advanced when Richard Gasquet of France withdrew due to an abdominal strain.

Djokovic planned to maximize his time on the practice court over the next few days as he gets ready for next week's tournament in Cincinnati ahead of the U.S. Open at the end of the month.

"Obviously I'm disappointed that I lost this early in the tournament, but on the other hand I had a tough draw yesterday and today again. Tsonga played (at) a very high level, great quality shots.

"All I can say is well done and I have to move on."