The second-seeded German needed 57 minutes to complete the victory. He will play fifth-seeded Dominic Thiem in Sunday's final.

"I think he picked up his level," said Shapovalov, a product of Richmond Hill, Ont. "My concentration just didn't feel like it was there today. I'm not sure if it was the long wait for the match or just a tough week. I didn't feel completely out there.

"I'm not taking anything away from him. He's playing great, unbelievable tennis. All the best to him. If he keeps going like this, soon enough he's going to be winning Grand Slams." 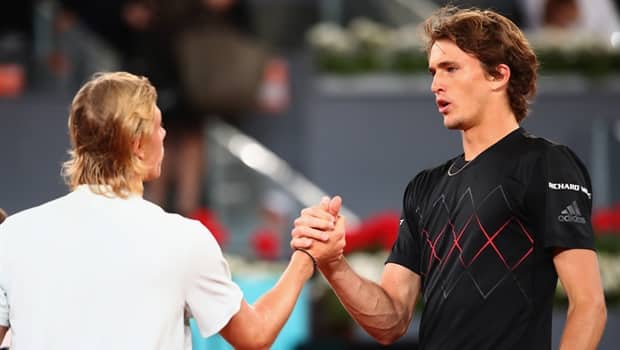 3 years ago
1:24
Alexander Zverev advanced to the Madrid Open semifinals with a 6-4, 6-1 win over Denis Shapovalov of Richmond Hill, Ont. 1:24

'It's been an amazing week'

Shapovalov enjoyed a breakout performance at last summer's Rogers Cup in Montreal before falling to Zverev in the semifinals. The 19-year-old Canadian will crack the top 30 when the updated ATP world rankings are released.

"It's been an amazing week," said Shapovalov. "Obviously it's tough to feel positive after a loss always. Yeah, it's been a tremendous week. Getting my first win on the ATP Tour on clay here, yeah, making semifinals of such a big tournament, I could never imagine to do so."

Kvitova previously won on the Madrid clay in 2011 and 2015. This third win took the Czech's career total to 24 titles, including four in the first five months of 2018.

The final was evenly contested, with both players getting three breaks each while saving many more chances.

The key moment came when Bertens appeared to have swung the momentum back in her favour by pulling back a break in the third set, only for Kvitova to strike right back and recover the advantage for a 5-3 lead. She served out for the championship.

"It feels great, it does not matter if it is the first, second or third title," Kvitova said.

The roof of the Caja Magica was closed without play being interrupted when it began raining in the second set.