Top-seeded Simona Halep won 10 straight games in beating Sara Sorribes Tormo 6-4, 6-0 to reach the second round of the French Open on Sunday and extend her winning streak to 15 matches.

2018 champ cruises to 6-4, 6-0 victory after slow start against Spanish opponent

Top-seeded Simona Halep won 10 straight games in beating Sara Sorribes Tormo 6-4, 6-0 to reach the second round of the French Open on Sunday and extend her winning streak to 15 matches.

Halep won on her 29th birthday, but with minimal celebrations planned for the evening since the coronavirus pandemic means players stay locked inside the security bubble of their hotels.

"It was really special day playing on Roland Garros on my birthday," she said from Paris. "I cannot celebrate much because I have to stay in the room, so I will have a bottle of water."

Wearing thick black leggings and a long-sleeved pink jersey to combat the chilly conditions on Court Philippe Chatrier in Paris, the 2018 champion made a series of unforced errors and trailed 4-2.

"I felt the cold. I'm not very happy with the cold in general," Halep said. "So it was a little bit tough, I struggled."

But then she found her range, clinching the first set with a hold to love and sealing victory on her first match point when her Spanish opponent clipped a forehand wide.

Halep is ranked second but seeded first at Roland Garros because defending champion Ash Barty skipped coming to Paris because of coronavirus concerns. Halep won titles on clay in Prague and Rome and her winning run — interrupted by the pandemic — dates to February. 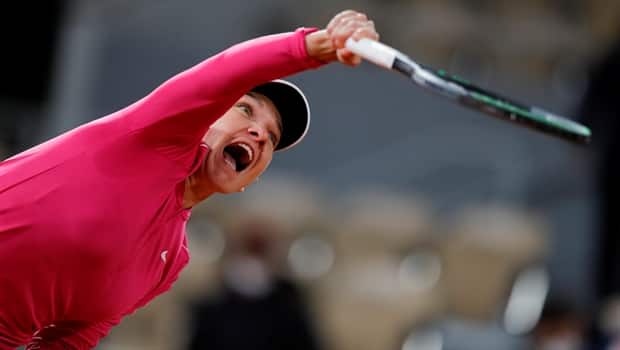 She next faces either countrywoman Irina Camelia Begu or Jil Teichmann of Switzerland.

Halep was not alone in wrapping up warm.

The 10th-seeded Azarenka, who beat Danka Kovinic 6-1, 6-2, fumed when match officials didn't immediately send them back to the locker room during a rain interruption.

"I am going to get frozen," she complained. "No. I'm not waiting here a couple of minutes because I'm cold. It's eight degrees, eight degrees, I live in Florida, I am used to hot weather."

Before walking off court, Azarenka grumbled "it's ridiculous. It's too cold … What's the point? Sitting here like ducks."

After the match, she said the conditions were risky.

"I think my opponent slipped in the third game, so I think she was also feeling a little bit uncomfortable," Azarenka said. "Does it increase the risk of players getting injured? Absolutely, I think that it does."

She next faces Anna Karolina Schmiedlova, who won 6-4, 6-4 against American veteran Venus Williams.

Another quick exit for Venus Williams at Roland Garros

Since the start of 2018, the seven-time Grand Slam champion has lost in the first round in seven of the past 11 major tournaments.

There were only a handful of spectators watching their match in chilly conditions on Court Simone Mathieu.

Williams, who lost the 2002 final to her younger sister Serena, was deep in trouble at 4-1 down in the second set. She fought back well before Schmiedlova clinched the match on serve, on her third match point, with a forehand winner down the line.

Coronavirus restrictions mean only 1,000 people are allowed per day at the tournament in western Paris.

But only 150 were there to see 11th-seeded David Goffin begin his match against Next Gen ATP Finals champion Jannik Sinner at just after 11 a.m. under the new Chatrier roof.

Add the French Open to Coco Gauff's list of Grand Slam tournaments where she has beaten seeded opponents.

The 16-year-old American made her main-draw debut at Roland Garros a successful one by eliminating No. 9 seed Johanna Konta 6-3, 6-3 at Court Suzanne Lenglen on Sunday.

Konta was a semifinalist a year ago in Paris, while Gauff lost in qualifying rounds.

Gauff  reached the third round at the U.S. Open last year, and the fourth round at the Australian Open this year, beating 2019 champion Naomi Osaka along the way.

Things had been a bit tougher for Gauff lately: She entered the French Open having lost four of her past five matches. But she handled the cold weather and heavy conditions better than Konta, a three-time Grand Slam semifinalist.

Stan Wawrinka made quick work of Andy Murray in their reunion of sorts at the French Open.

In the first matchup of Grand Slam champions in the first round of any major tournament since 2012, Wawrinka beat Murray 6-1, 6-3, 6-2 in a little more than 1 1/2 hours at Court Philippe Chatrier.

Wawrinka compiled a 42-10 edge in total winners while making just one more unforced error than Murray, 27-26.

This was the 21st matchup between the pair of three-time Grand Slam champions. One of those previous meetings came in the 2017 French Open semifinals, won by Wawrinka.

Neither man has really been the same since. Wawrinka has had multiple knee operations, and Murray has had two hip operations.