Tennis Canada says Felix Auger-Aliassime is doing fine and “everything is back to normal” after Monday night’s scare on the court at the U.S. Open.

Tennis Canada says Felix Auger-Aliassime is doing fine and "everything is back to normal" after Monday night's scare on the court at the U.S. Open.

The 18-year-old was forced to retire from his first-round match against fellow Canadian Denis Shapovalov​ in the third set after he said his heart was racing.

The match was delayed during a changeover as Auger-Aliassime, making his first appearance in the main draw of a Grand Slam, was attended to by medical staff.

"He will be coming back to Montreal and will take a few days off before he starts training again. He needs to sit down with his team to decide on his tournament schedule for the rest of the year," Tennis Canada said in an email. "He will need to investigate deeper with his medical team."

Auger-Aliassime laid on the court with his legs propped up on a chair as a medical staffer checked his heart rate with a stethoscope.

Just a couple of games later, Auger-Aliassime broke down in tears on the court after having to retire from the match. He was quickly consoled by Shapovalov, who is a friend of his. The two hugged one another at the net as Auger-Aliassime continued to cry.

Watch the emotional moment between Shapovalov and Auger-Aliassime: 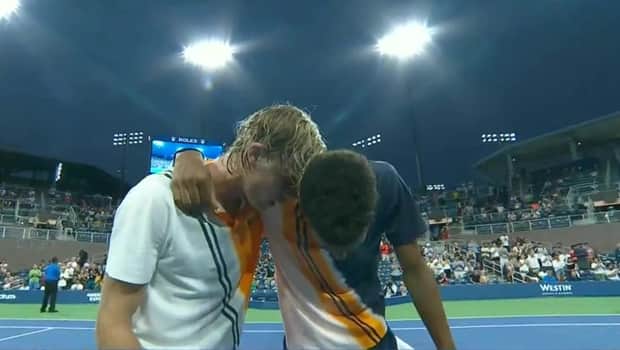 2 years agoVideo
1:33
The Canadians shared a moment at the net after Felix Auger-Aliassime had to retire from his first Grand Slam main draw event. 1:33

After the match, Auger-Aliassime explained what he was experiencing.

"After the second set I started feeling some fast heart rates, palpitations. It's something I've experienced before," Auger-Aliassime told TSN in his post-game interview.

"We're not quite sure of the reason yet but we'll look deeper into that. I was hoping it [the heart rate] could go down so I could finish the match, but it was impossible to keep going."

Shapovalov showed concern for Auger-Aliassime in his post-match interview on the court.

"It's tough to see a friend go down like that. It was tough. When I saw that he was struggling, I still had to keep trying to win, keep kind of pounding it on him. It wasn't easy for me," Shapovalov said. "This match — it's great for Canadian tennis. Two young guys that are coming up, that have grown up together, playing against each other."

Watch highlights from the all-Canadian match: 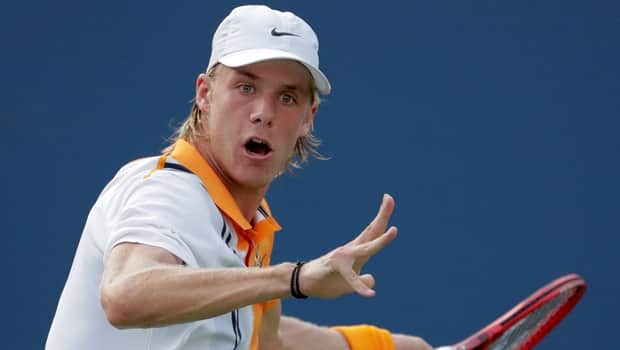 Match Wrap: Shapovalov onto 2nd round of U.S. Open, Auger-Aliassime forced to retire

2 years agoVideo
2:19
Denis Shapovalov moves onto the 2nd round of the U.S. Open after fellow countryman Felix Auger-Aliassime was forced to retire in the 3rd set. 2:19

This isn't the first time Auger-Aliassime has retired due to a fast heart rate.

Tennis Canada says he had the same issue a few years ago in a Challenger event in Guadeloupe that forced him to retire, "but has been OK since then."

"He believes that what he experienced yesterday might have been caused by the heat mixed with the stress and the adrenaline from the match," Tennis Canada added.

Auger-Aliassime's next event, if selected to be on the team, would be the Davis Cup matches in Toronto Sept. 14-16.