Felix Auger-Aliassime advances to 2nd round in Hamburg

Montreal's Felix Auger-Aliassime advanced to the second-round of the Hamburg Open clay-court tennis tournament with a 6-2, 7-6 (2) win over Italian Lorenzo Sonego on Tuesday.

World No. 21 gives up just 4 points on serve in straight-set win

Montreal's Felix Auger-Aliassime advanced to the second-round of the Hamburg Open clay-court tennis tournament with a 6-2, 7-6 (2) win over Italian Lorenzo Sonego on Tuesday.

The 20-year-old dominated the first set in a match that lasted one hour 47 minutes, giving up just four points on serve.

The world No. 21 had a tougher time in the second set, saving two break points in the 11th game before finally winning the set in a tiebreaker. 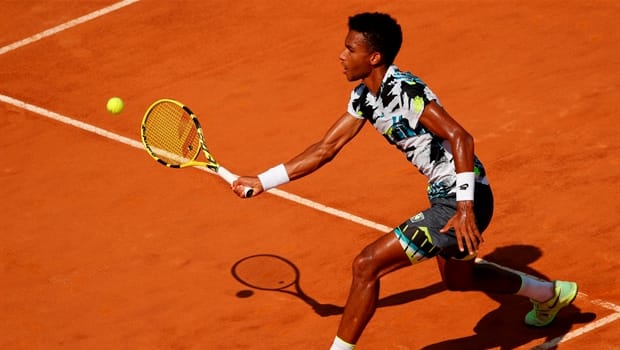 Auger-Aliassime victorious in Hamburg opening round

Auger-Aliassime has had mixed results since returning to competition after COVID-19 caused the ATP Tour to take a months-long hiatus. After making the round of 16 at the U.S. Open, Auger-Aliassime was eliminated in his first game last week in Rome.

He is seeded 20th in the men's draw at the French Open, which starts Sunday.

Canada's Peter Polansky was eliminated in the first round of French Open qualifying on Tuesday after dropping a 7-6, 6-0 decision to Argentina's Leandro Mayer.

Polansky, from Thornhill, Ont., was up 4-1 in the first set before Mayer won the next 11 games to take the match.

Two Canadian men are still in the hunt for a spot in the main draw. Toronto's Steven Diez and Brayden Schnur of Pickering, Ont., won their opening qualifying matches on Monday.

Diez next faces Christopher Eubanks of the United States on Wednesday, while Schnur will meet American Sebastian Korda.

They will seek to join Denis Shapovalov of Richmond Hill, Ont., Milos Raonic of Thornhill, Ont., Auger-Aliassime and Vancouver's Vasek Pospisil in the men's main draw.

Leylah Annie Fernandez of Laval, Que., and Eugenie Bouchard of Westmount, Que., are in the women's main draw.