Canada's Eugenie Bouchard advanced to the second round of the French Open by downing Anna Kalinskaya of Russia 6-4, 6-4 on Sunday in Paris.

Canadian converted 6-of-8 break points, had 18 winners vs. 108th-ranked Kalinskaya

Canada's Eugenie Bouchard advanced to the second round of the French Open by downing Anna Kalinskaya of Russia 6-4, 6-4 on Sunday in Paris.

Bouchard, ranked No. 168 and a wild-card entry at the clay-court Grand Slam, converted 6-of-8 break points and had 18 winners to dispatch the No. 108-ranked Kalinskaya in one hour 21 minutes.

Bouchard is coming off a finals appearance at the clay-court Istanbul Open two weeks ago, her first time playing for a title at a WTA tournament since 2016.

"I really think she looks like a much better athlete than she's been in the past," Tennis Canada analyst Tom Tebbutt told CBC Sports recently. "So, you know, she's in good condition and she's fit enough, I think, to play really good tennis, whether that's top 50, top 30, top 20, top 10, I don't know. … But I mean, she has that pedigree and she's a really, really good tennis player." 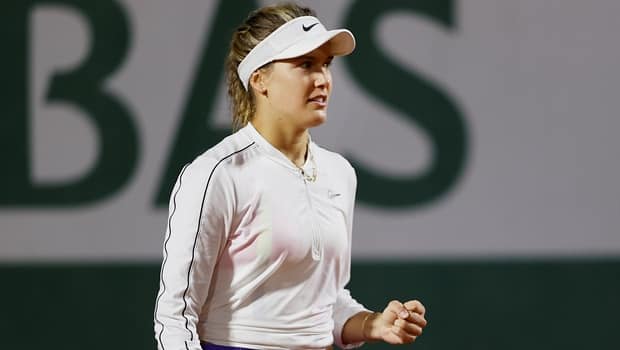 The 26-year-old Bouchard's best appearance at the French Open was a semifinal appearance in 2014. She reached a career-high No. 5 ranking later that year.

Bouchard will play Daria Gavrilova of Australia in the second round.

Gavrilova, ranked No. 251 in the world, upset No. 24 seed Dayana Yastremska of Ukraine in their first-round matchup.

Bouchard, from Westmount, Que., is one of six Canadian entries at Roland Garros but the only one in action Sunday.

The French Open usually takes place in the spring but was postponed by four months because of the COVID-19 pandemic.

Bouchard spent the WTA season suspension in Las Vegas working with Andre Agassi's former trainer Gil Reyes, known as one of the toughest fitness enforcers in the sport.

Often riddled with criticism about her commitment to excellence, Tebbutt said the move to Reyes shows Bouchard's focus on getting back on track.

"Bouchard has pulled herself up by her bootstraps. She's really, really worked hard in Las Vegas," noted Tebbutt. "And Gil Reyes is maybe one of the very, very best guys to work with to get her fit. She's got the basic fitness thing. Now, that's not a concern for her anymore."