Eugenie Bouchard thrilled her hometown crowd with a 6-3, 3-6, 7-6 (3) victory over Lucie Safarova in the opening round of the US$2.4 million women's Rogers Cup on Tuesday. 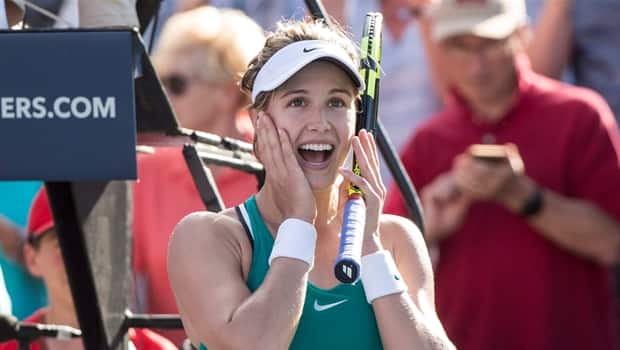 Eugenie Bouchard reconnected with her hometown fans with an impressive first-round victory at the US$2.4 million women's Rogers Cup, but now there is concern for her health.

Coach Nick Saviano said Bouchard was fine as she upset Lucie Safarova 6-3, 3-6, 7-6 (3), but struggled through a stomach problem while she and partner Carol Zhao lost in straight sets in doubles.

Bouchard was unable to attend the usual post-match meeting with the media. Saviano and Federation Cup captain Sylvain Bruneau appeared instead.

"She came off the court and she was in a lot of discomfort with her stomach," said Saviano. "We know it's not serious, but she's very uncomfortable now.

"She should be fine for (Wednesday). The objective is to make sure she has every chance to compete at 100 per cent and we're very confident that will happen."

Bouchard is to face ninth-seeded Dominika Cibulkova, a 6-2, 6-2 winner over Mariana Duque-Marino, in a night match in the second round on Wednesday.

She was the second player to be hit with a similar problem on the day, as third-seeded Garbine Muguruza withdrew with a digestive problem. Savarino said it was not certain if the two cases were linked or even the same.

A large crowd at Uniprix Stadium was solidly behind the Westmount, Que., native throughout her 6-3, 3-6, 7-6 (3) win over Safarova, the pre-match favourite ranked 28th in the world to Bouchard's 41st.

They roared as Bouchard came back from a 3-1 deficit in the tiebreaker with six straight points, taking the win on Safarova's 10th double fault of the match.

Image has taken a hit

Bouchard's public image has taken a hit of late.

Three local newspaper columnists had criticized her in recent days, mostly to do with losing touch with her home fan base since her spectacular 2014 season when she reached the Wimbledon final and rose to No. 5 in the world.

It did not go over well last week when, after losing her first match in Washington, D.C., she talked about visiting museums in the U.S. capital rather then go home to the "craziness" in Montreal.

Bouchard clearly had a change of heart because she not only headed north right away, but participated in off-court events with fans and ended uncertainty over her Olympic plans by saying she will represent Canada at the 2016 Games in Rio de Janeiro.

Then she pulled off a thrilling and unexpected win on centre court.

Bouchard dominated the opening set, completing her second service break with a pinpoint backhand down the line, only to see Safarova find her service range and turn the tables in the second.

They held serve through the third, although Bouchard let three match points slip away while leading 6-5, 40-0, giving Safarova momentum going into the tiebreaker.

Errani, ranked 25th in the world, posted four service breaks in the first set of the centre court battle of 29-year-old baseliners. Errani, coming off a quarter-final on clay in Sweden last week, led 4-2 in the second when Wozniak had her best moments battling back to force a tiebreaker.

Wozniak was ranked 21st in 2009 but has slipped to 465th after a series of injuries, including major shoulder surgery. She lost in the first round for a second week in a row, having fallen to Jessica Pegula last week in Washington, D.C.

"I think it was a close match, playing the No. 25 in the world," said Wozniak. "I thought I played well.

"I had some opportunities to turn it around. But I'm happy with the performance going forward after this long period of time which I didn't play such a high level of tennis."

The third Canadian in the 56-player draw, Francoise Abanda of Montreal, went up 6-1, 4-1 on Chinese qualifier Saisai Zheng, but then had to battle to take the second set 7-5. The 19-year-old Abanda, ranked 272nd to Zheng's 66th, posted her first Rogers Cup win in three tries. She will face 17th seeded Elina Svitolina in the second round. 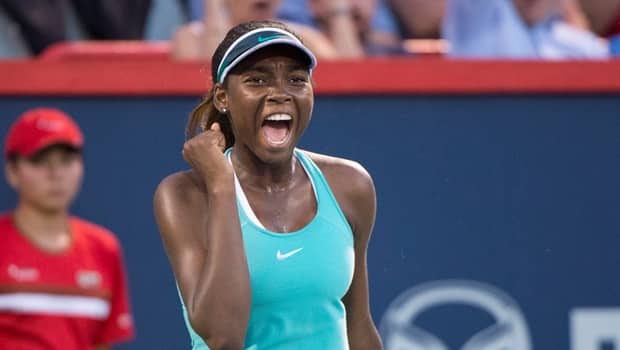 Abanda's match was moved to centre court after French Open champion and third seed Garbine Muguruza withdrew with a digestive illness, Her scheduled opponent, British qualifier Naomi Broady, instead was matched against lucky loser Varvara Lechenko in the second round.

"Even though (Monday) I couldn't play because of the rain, I kind of didn't feel well," said Muguruza, who plans to stay on and get over what is considered a minor illness. "Call the doctor and everything — I don't feel well.

"Today I went to the court to warm up, but I didn't really feel 100 per cent. At the last moment of the match, I start to warm up again and I'm like OK no, no, I don't feel (well enough) to go on the court and give my best."

A battle of the Madisons looms as 10th-seeded Madison Keys breezed by Elena Visnina 6-4, 6-0 and will face fellow American Madison Brengle in the second round. Keys has won all three previous matches between them.

Lucky loser Christina McHale of the U.S. posted a 6-4, 3-0 win over qualifier Shuai Zhang, who retired in the second set. McHale will next face 16th-seeded Anastasia Pavlyuchenkova, who defeated Yulia Putintseva 6-4, 1-6, 7-5.

Andrea Petkovic of Germany downed Alize Cornet of France 7-6 (1), 6-3 to advance to a second-round meeting with 12th seeded Petra Kvitova.